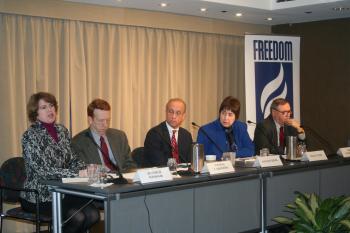 WASHINGTON—Ever since the fall of communism in Eastern European countries in 1989 and later the Soviet Union, the expectation has been an expansion of democracy and freedom around the globe. The movement toward more democracy and human rights has been halted in the last couple of years, as authoritarian regimes have fought back and found ways to combat democratic tendencies. Recent findings in Freedom House’s latest annual report, “Freedom in the World,” released Jan. 12 found a global decline in freedom for an unprecedented fourth consecutive year.

Freedom, democracy, and human rights in the world did not advance last year, according to a survey of the world’s 194 countries and 14 territories conducted by Freedom House, which has been publishing a report since 1972. To be sure, there were some gains, but they were outweighed by declines in freedom in 40 countries in Africa, Latin America, the Middle East, and the former Soviet Union.

Arch Puddington, who is most responsible for the report and is Freedom House’s director of research, said, “The decline … affects countries that had previously shown signs of reform potential, and is accompanied by enhanced persecution of political dissidents and independent journalists.”

At a forum sponsored by Freedom House on the day of the report’s release, there was disagreement on whether the “decline” in freedom suggested in the report was just a blip. Thomas Carothers, founder and director of the Democracy and Rule of Law Program at the Carnegie Endowment for International Peace and a leading authority on democratization worldwide, preferred to characterize Freedom House’s results for the last four years as “stagnation” rather than a “decline” or “reversal.”

In any case, there is no disputing that the state of freedom in the world has improved since 1989, with more electoral democracies. And the majority of countries that made progress 20 years ago have not relapsed. However, results like Freedom House’s reports for the past four years call into doubt the inevitability of global democracy expansion.

Freedom House is an independent organization that monitors the status of freedom around the world, using a set metrics that measure changes in a country’s adherence to the rule of law, freedom of association, and freedom of expression. Indicators of these freedoms include an independent judiciary, free elections, nonuse of torture, extent of “civil society,” and freedom of the press.

As a general measure of overall progress or lack thereof, Freedom House uses several indicators to classify countries into three broad status categories: “Free,” “Partly Free,” and “Not Free.” In a free country, one finds a multi-party political system, protection for civil liberties, civic life, and an independent media. A “Not Free” country typically is run by an authoritarian government where basic political rights and civil liberties are widely and systematically denied. A “Partly Free” country has limited respect for political and civil liberties, and typically there is corruption, weak rule of law, and dominance by one political party.

Most changes in a country’s freedom score occur within these broad three groups, and such changes are relatively minor. More momentous are status changes between the categories. Only one country, Lesotho, fell from “Free” to Partly Free,” but five countries fell from “Party Free” to “Not Free.” Three of these were from the Middle East—Bahrain, Jordan, and Yemen.

Kyrgyzstan in Central Asia dropped to “Not Free” due to a “flawed presidential election” and “new legal restrictions on freedom of religion.” Particularly disappointing was Kazakhstan (which was already ranked “Not Free”), whose government failed to live up to a promise to enact political reforms in exchange for becoming the chair of the Organization for Security and Cooperation in Europe (OSCE), a.k.a. the Helsinki Commission.

Gabon on the west central coast of Africa also fell to “Not Free” due to “increased restrictions on the media in the period surrounding the presidential election as well as a crackdown on postelection protesters,” says the report.

Holding an election is not a sufficient condition to truly be an electoral democracy, as the recent Iran election with allegedly massive voter fraud would exemplify. In addition to a secret ballot and a fair count, there should be a competitive multiparty political system, universal suffrage, and open political campaigning.