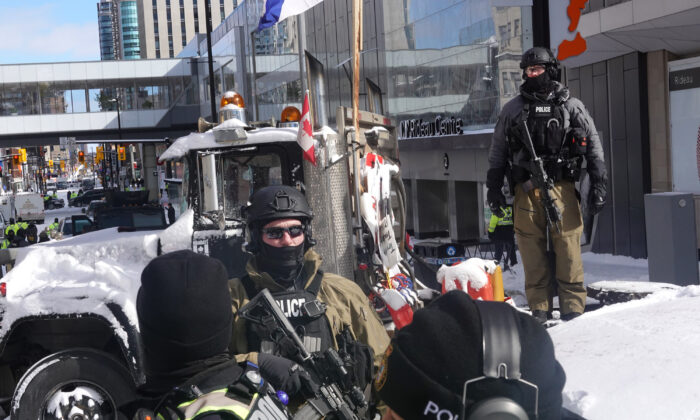 Many claims have been made by government and media about Freedom Convoy protesters in Ottawa committing serious crimes such as arson, threatening rape, or being bankrolled by Vladimir Putin, but most if not all have been unsubstantiated or debunked.

On April 2, Conservative MP Dane Lloyd released a video analysis of his interaction with Ottawa Police Service (OPS) interim chief Steve Bell during a House committee meeting in which he grilled Bell about allegations of loaded firearms being found at the site of the Ottawa protest.

“I’m asking [Bell] a ‘yes or no’ question, and he’s really trying to avoid it, but he did just confirm that no loaded shotguns were found at the protests, which I think is very interesting because we’ve seen from police sources, from the media, from even members of the government claiming that the truckers were committing acts of arson, that they had found firearms,” says Lloyd in the video, relating to an exchange that occurred during a meeting of the House of Commons Standing Committee on Public Safety on March 24.

“And yet, when we really delve down and ask the questions, and look for the evidence, we’re finding out that the story’s a lot different than what we were told.”

Lloyd was referring to an article published in the Toronto Star that quotes an anonymous police source saying that loaded shotguns were found at the protest site during the police clearing operation, and the information was retweeted by Minister of Crown-Indigenous Relations Marc Miller.

Firearms can be kept in locked vehicles, but stored firearms must always be unloaded.

As for the arson claim, many politicians including Ottawa Mayor Jim Watson said the protesters were responsible, but OPS made two arrests in the case and said the suspects were not involved in the Freedom Convoy protest.

Check out this breakdown of my questioning of Ottawa’s Interim Police Chief Steve Bell about the Ottawa convoy protests. pic.twitter.com/rzIu7Fnu6P

He added that if firearms had been found, police would have made a lot of noise about it like they usually do. This, combined with Bell’s testimony, leads Lloyd to think there were “definitely no firearms found.”

Bell did say during his testimony that there were ongoing investigations into weapons possession, but not specifically firearms.

“I think it’s very interesting that despite this total lack of evidence, we still have members of the media and members of the government who are trying to spin this tale, that there were all these firearms in downtown Ottawa. And yet, we’ve never seen a shred of evidence to back that up,” Lloyd said.

He brought up how the claim about foreign funding “flooding in” for the Convoy was debunked when crowdfunding platform GoFundMe testified before the committee.

GoFundMe told the public safety committee on March 3 that 88 percent of donations to the Freedom Convoy came from Canada.

Among other unproven or debunked claims made about the convoy protest, a CBC host suggested that Russia could be behind it and later issued a clarification, and Liberal MP Sophie Chatel also suggested Russian money was behind the protest during a meeting of the finance committee on March 17.

“Because, you know, we know Russia and all other money launderers, they are holding bank accounts in every country under several shell companies, or even companies that appear legitimate. So what’s your due diligence to look beyond the credit card holder?” Chatel asked GoFundMe president Juan Benitez.

“In our opinion, and the evidence we see, there was just no coordinated effort there to have any kind of contribution or impact,” said Benitez about Russian involvement.

As for allegations related to sexual assault, Public Safety Minister Marco Mendicino told the public safety committee on Feb. 25 that protesters had made “threats of rape.”

“There were Ottawans who were subjected to intimidation, harassment, threats of rape, and those were all supported by charges,” Mendicino said.

“We debated this particular issue [invoking the Emergencies Act] for over 40 hours. Not once did the prime minister, you, or any other senior member of cabinet, or any member of your backbench, raise a rape allegation,” Brock said.

“So my question to you is very pointed. If that allegation did not result in a criminal charge—and it’s not rape under the criminal charge, as you know since you’re a lawyer—it’s an allegation of sexual assault. Will you undertake to provide this committee with proof of allegations?”

“The absence of criminal charges doesn’t mean it didn’t happen in Ottawa, and it doesn’t happen every day, Mr. Brock, and I would think you would know that,” Mendicino replied.

The Freedom Convoy protest demanding the lifting of COVID-19 restrictions started in Ottawa on Jan. 29 and lasted until the government invoked the Emergencies Act on Feb. 14, with a subsequent massive police operation clearing the protest on the weekend of Feb. 18. The public order emergency was lifted on Feb. 23.