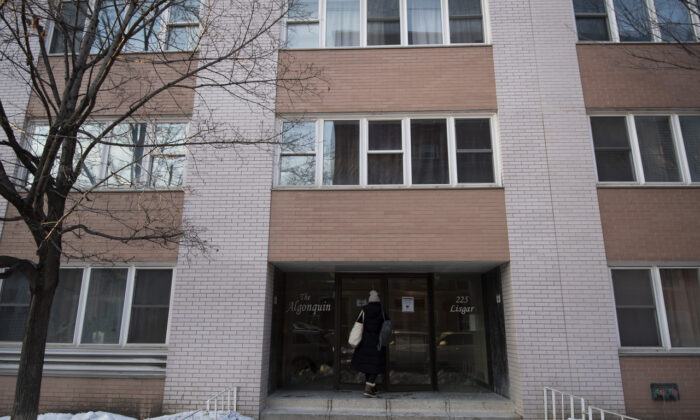 A person enters an apartment on Lisgar Street, where police said two men attempted to start a fire in the building’s lobby, in Ottawa on Feb. 7, 2022. (The Canadian Press/Justin Tang)
Canada

Second Man Charged With Arson in Ottawa Apartment in February

A second man has been charged with arson after allegedly trying to set fire to an apartment building in downtown Ottawa on Feb. 6, while police say there is no indication that he was connected with the truckers’ Freedom Convoy protest taking place in the city at the time.

“There is no information indicating Wernik was involved in any way with the Convoy protest which was going on when this arson took place,” the police said.

The charges have not been tested in court and police said Wernik will appear in court at a later date.

Last month, the police gave similar charges to Connor Russell McDonald, who joined Wernik in the attempt to set fire to the Ottawa apartment building in early February.

He was also not connected to the Freedom Convoy protests, the police said.

In a Twitter post on Feb. 7, the police shared photos of the two “persons of interest” in their investigation of the arson incident that occurred at the Lisgar Street building.

Matias Munoz, a resident of the apartment building, said in an earlier interview with The Canadian Press that he found the carpet in the building’s lobby charred, with blackened fire-starter bricks strewn across the room a day after the incident occurred.

He said the building manager showed him a surveillance video that showed two men lighting a package of the bricks in the lobby and securing the front door handles together before leaving through the side door at around 5 a.m. on Feb. 6.

While the police didn’t connect the two suspects to the Ottawa protest, the city’s mayor and several Liberal and NDP MPs had previously linked the criminal incident to the protests.

On Feb. 7, Ottawa Mayor Jim Watson brought up the arson investigation during a special council meeting that day, saying the incident was a “horrific story that clearly demonstrates the malicious intent of the protesters occupying our city.”

The Epoch Times reached out to the mayor’s office for comment after the police charged McDonald, but didn’t hear back.

Yasir Naqvi, Liberal MP for Ottawa Centre, where the incident took place, also linked it to the convoy during a Feb. 7 House of Commons emergency debate about the COVID-19 protests. Several other Liberal and NDP MPs also repeated the allegations in the House of Commons.

The convoy protest started in late January in opposition to the federal COVID-19 mandate that requires cross-border truck drivers to be fully vaccinated in order to avoid a 14-day quarantine. It soon evolved into a national movement as truckers demonstrated in Ottawa for weeks, with many supporters joining the call for an end to all pandemic-related restrictions.