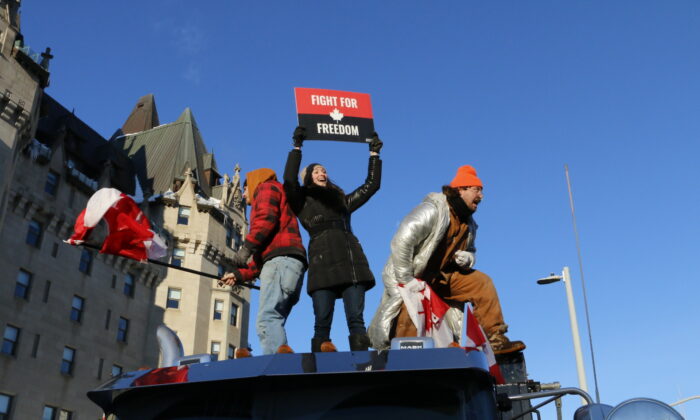 Protesters stand atop a truck in downtown Ottawa on Jan. 29, 2022, at the beginning of the Freedom Convoy demonstration. (Noé Chartier/The Epoch Times)
Canada

Crowdfunding platform GoFundMe said Russia played no role in the financing of the Freedom Convoy in testimony before the House Finance Committee Thursday, with a Liberal MP suggesting it was the case.

Sophie Chatel prefaced her questioning of GoFundMe by saying that Russia has been “engaged in misinformation warfare for years” and that it has $1 trillion in “dark money that is circulating, dedicated to undermine our democracy.”

“So you accumulate $10 million from donors,” Chatel said in reference to the amount collected by GoFundMe before it shut down the fundraiser to support the Freedom Convoy.

GoFundMe president Juan Benitez told the Finance Committee that 88 percent of donations originated from within Canada, information it gave to the Public Safety Committee on March 3.

Chatel cast doubt on whether the funds were indeed really mostly from Canadians.

“Because, you know, we know Russia and all other money launderers, they are holding bank accounts in every country under several shell companies, or even companies that appear legitimate. So what’s your due diligence to look beyond the credit card holder?”

Benitez provided an explanation of the various measures taken by his company. “We stepped up our donation reviews and proactively did that review of foreign sources, and so we feel comfortable with our policies and processes associated with those reviews,” he said.

Another MP on the committee called out Chatel for pursuing the Russian angle.

“With respect, I think one of my colleagues was a little bit irresponsible in talking about speculation of connection with the Russian government,” said Conservative MP Philip Lawrence, who then proceeded to ask GoFundMe about any Russian donations.

“In your search, in the way that you review transactions, did you uncover any connection between the illegal protests or blockades and the Russian government?” Lawrence said.

“For this campaign, we did review the source of donations extensively … and there was virtually only perhaps a handful at most of donations from Russia,” said Benitez.

“In our opinion, and the evidence we see, there was just no coordinated effort there to have any kind of contribution or impact.”

Chatel defended pursuing the Russian angle by saying that “disinformation warfare is absolutely real. There’s no doubt in our mind. It entices people to donate for causes that are harmful to our democracy.”

The claim that Russia was supporting the Freedom Convoy, a cross-country movement demanding the lifting of COVID-19 restrictions, had been previously made by the state broadcaster CBC.

In late January, a CBC host suggested that Russia could be backing the protest movement, but the network later issued a clarification.

The Emergencies Act was invoked by the Liberal government on Feb. 14 to suppress the protests and blockades related to the Freedom Convoy. It was lifted on Feb. 23.