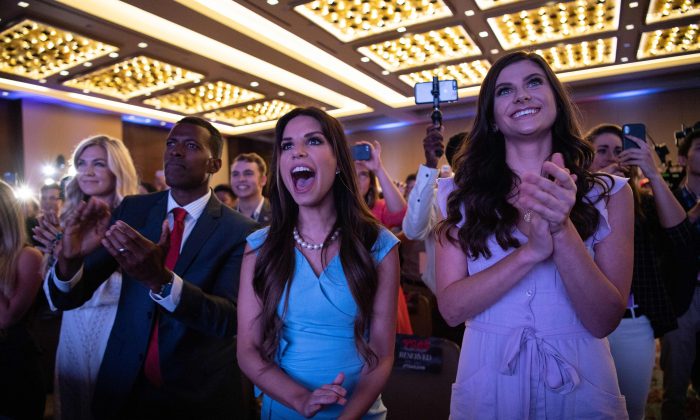 WASHINGTON—Students attending Turning Point USA’s Teen Student Action Summit on July 23 spoke at length about the silencing of conservative youth and the importance of free speech in high schools and colleges.

Their comments came after President Donald Trump derided socialism and the growing radical left during an hour-long speech to more than 1,000 high school and college students. The median age of students was 16-years-old.

Students came from all 50 states to attend the summit—a four-day conference held from July 22 to 25 where they will hear from numerous conservative leaders and politicians—at Marriott Marquis, a hotel located in the heart of Washington.

“I have seen him [Trump] speak before, but the fact that I get to be here and listen to him totally changes your outlook on things. I came here because I wanted to be an activist. I have been in politics for many years, its something I’m very passionate about,” West told The Epoch Times.

“I want to go into congress one day, I want to be someone that changes the rhetoric on how politicians act. I want to be a person for the people basically speaking and being here really helps. I live in a red state, but I still live in a pretty liberal school. You always feel like a teacher is going to come after you and lower your grades. It’s just awful how we have to live with that.”

“Oh my gosh, it was amazing. I actually got emotional a bit through [Trump’s speech] because he is just so inspirational, and he tells the truth. And he makes young conservatives like me motivated to go speak out for what I believe in. To speak out about my faith, speak out about my beliefs,” Mrema said.

“Conservatives in America today are treated horribly, in the sense that they get ridiculed, attacked. But let’s say if a conservative did that to a liberal, it would be hell on earth. So I think there’s a bunch of hypocrisy on the left, in the sense that the left has the ability to treat conservatives with such disrespect, but as soon as a conservative maybe fights back, it’s not allowed. It’s very sad. I think free speech is absolutely necessary to be able to have a functioning campus. We need to be able to hear everyone’s ideas and discuss them, debate them, but all in all, just hear what everyone has to say and what they think.”

Jacob Christensen, a student from Utah

“I thought he [Trump] was fired up, especially towards the end there. I like it when he’s more off the cuff when he doesn’t read off the teleprompter. I feel conservatives are treated terrible. I’m from Utah, we don’t get treated as badly, but you see Andy Ngo, the reporter that just got destroyed by Antifa,” Christensen told The Epoch Times.

“I don’t think conservatives are being treated very well. We get attacked on college campuses we get attacked in our own cities whenever we wear a MAGA hat. It’s not right, you can’t do that to anybody else, and it’s creating a protective class of society for everybody that isn’t conservative.”

Murphy Molly, a student from Virginia

“I think especially at our age its good to hear about politics so that by the time we are able to vote and make an impact on this country, we will know what we are doing. It’s very hard to stand up for free speech, especially when the people who are saying to stand up for free speech are also attacking it at the same time because they are saying that their party should have free speech. So it’s kind of hard to maintain both at the same time.”

“I really want to bring back what I learned today, back to my own campus, to a lot of my friends and teachers, my school is just really liberal. I feel like conservatives definitely get the raw end of the stick in a lot of things,” Kontra said.

“We are not really represented in the media, and at schools, the schools pushes the narrative of what we are, and so I want to show a different side. I feel free speech is the most important thing in America currently, I feel like its really under attack. We just really need to stand up for what we believe in.”