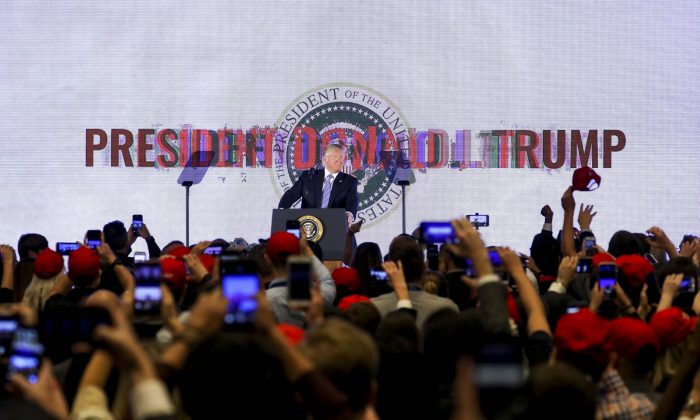 WASHINGTON—President Donald Trump spoke out against socialism and the growing radical left at Turning Point USA’s Teen Student Action Summit in Washington on July 23. The president praised the young people in the room for putting America first.

“You are the ones who will make this a turning point,” he said to more than 1,000 high school and college students. “Your generation will make the light and the glory of America shine brighter than ever before.”

Students came from all 50 states to attend the four-day conference, held from July 22 to 25 at the Marriott Marquis hotel, where they will hear from conservative politicians and leaders. Turning Point is a conservative nonprofit organization that focuses on educating and organizing students.

Some had stayed overnight hoping to get a good seat to see the president, who gave an hourlong speech. Benny Johnson, chief creative officer at Turning Point, said the median age of audience members was 16.

The president touched upon multiple topics, including his “America First” agenda, but focused on the importance of free speech and how the radical left is increasingly shaping the Democratic Party and silencing conservatives.

He mentioned a video he saw of Rep. Rashida Tlaib (D-Mich.) screaming and being dragged out of a Trump rally before she was elected.

“This is not a sane person folks, and this is what we are up against,” Trump said. “The Democrats are forced to back her, I call it AOC plus three. The party are having to embrace them.”

“The Democrats … are being dragged into this radical left with these people that I believe … hate our country,” Trump said, referring to the four congresswomen known as “The Squad.”

The president said there are other Democrats “worse” than the squad and that he could be naming them in the future.

“I don’t know what they are going to do, they have a big problem,” Trump said, referring to the Democratic Party. “They have others than these four, I could name another 20 right now without looking at any notes. They are worse in some ways. At some point, we will be naming them.”

The radical left, Trump said, has “nothing but contempt for America’s heritage” and sees citizens as “subjects to be controlled.” He said they have one fundamental objective—that of power—the power to control citizens and the power to destroy the foundation of the republic.

Socialism, he said, is nothing short of empty promises of free things. Trump pointed out that most of the current 2020 Democratic field support giving illegal immigrants health care. He said illegal immigrants are also coming out to vote.

“They vote many times, not just twice, not just three times. It’s a rigged deal,” he said. “The radical left is waging an assault on the rule of America. They want to get rid of our borders, abolish ICE, and now they want to abolish Homeland security.”

But the people of the United States forcefully reject these “hate-fueled” attacks, he said.

Trump went off script at multiple points in his speech. At one point, he praised newly elected UK Prime Minister Boris Johnson, and in another, he derided what he called the “fake news” for saying he had built no new border wall.

He often commended the young people in the room for sticking with their values, touted that youth wages were up 10 percent, and that the “economic revival” under his administration is great news for anyone graduating.

The president spoke about censorship from social media giants such as Facebook, Google, and Twitter and college campuses that stifle the voices of conservative students.

He said these campuses won’t be getting “billions” of dollars from the government.

On that note, Trump invited Ryan Zink on stage, a student who was pepper-sprayed by a leftist at a Turning Point event.

“We believe that free speech in our schools is at stake,” Zink said after shaking hands with Trump. “Conservative students in many cases are being silenced and shut down by schools, teachers, friends. We cannot be silenced.”

The president said his administration is “looking into a lot of things” in this arena, and they are exploring “every regulatory solution.” Trump signed an executive order on March 21 instructing colleges across the nation to protect free speech on their campuses—or else risk losing federal research funding.

“They have not treated us fairly,” Trump said about liberals. “Everyone who speaks the truth is de-platformed, shut down … and, in many cases, assaulted.”

But he said it’s starting to change.

“The silent majority is silent no more,” Trump told the crowd.

Trump also invited Hunter Richard to the stage, a student who was assaulted at a fast food restaurant for wearing a “Make America Great Again” hat. The assailant was later arrested.

“I proudly wear my hat every time I go out of my house,” Richard said.