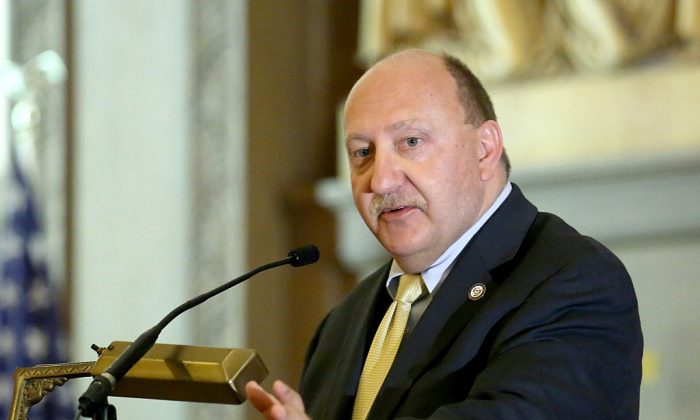 HARRISBURG, Pa.—A former mayor of Allentown, Pa., was sentenced on Oct. 23 to 15 years in prison for bribery and related crimes that prosecutors said he carried out to finance an abortive run for the U.S. Senate.

Ed Pawlowski, 53, was convicted on March 1 of 47 counts related to pay-to-play schemes in which he solicited kickbacks from prospective city contractors. Five of the counts were subsequently dropped.

Before his sentence was handed down, more than 40 defense witnesses asked for leniency before Pawlowski spoke in defeated tones to the judge.

“I have tried my best, I have struggled to be a good man,” he said. “I never imagined myself in this position. All that I am is now in your hands. I plead for mercy, for me, my family, my community.”

Pawlowski, a longtime Allentown resident who grew up in Chicago, had hoped to run for governor of Pennsylvania as a Democrat in 2014, but could not raise enough money.

He announced a run for the U.S. Senate the following year and decided he needed to raise $1 million by July 1, 2015, to be a credible candidate. Prosecutors said the pay-to-play schemes grew out of that goal.

Pawlowski served as mayor of the state’s third-largest city from 2006 to 2018 and touted his record on cutting street crime and the cost of government, while encouraging economic development that brought new life to Allentown’s downtown. He was re-elected a fourth time in 2015 even after it became known that he was under investigation by the Federal Bureau of Investigation.

Pawlowski’s lawyer, Jack McMahon, Jr., had argued to the court that Pawlowski had revitalized Allentown and that his crime was an aberration.

“He is a good guy, a good family man, and he wasn’t trying to line his own pockets,” McMahon told the judge during sentencing. “Not one nickel was being used to buy him a better tie, or his kids a better education, or a better car.”

McMahon had urged Judge Juan Sanchez to impose a light sentence in line with those received by other elected officials convicted of similar crimes.

The judge sentenced Pawlowski to the maximum sentence sought by prosecutors.

“In pursuing his ambition, he thought he was above the law, and chose to abuse the trust of his constituents and the people who worked for him,” the judge said before pronouncing the sentence.

He denied Pawlowski’s request for release on bail pending an appeal, and the former mayor was handcuffed in court.

Pawlowski’s co-defendant, Scott Allinson, a local lawyer, was sentenced by Sanchez this summer to 27 months in prison, the minimum urged by prosecutors.