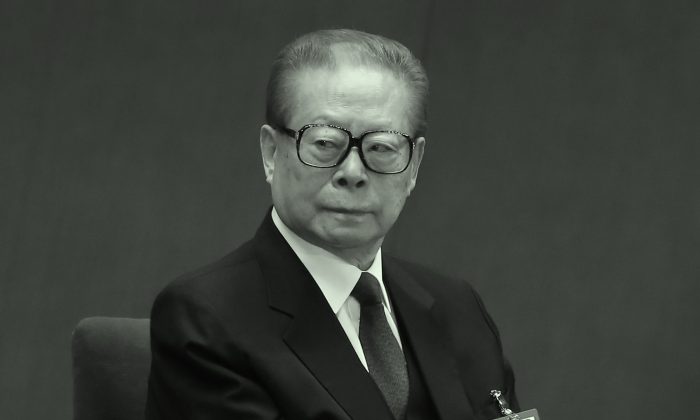 Former Chinese dictator Jiang Zemin at the Great Hall of the People in Beijing, China, on Nov. 8, 2012. (Feng Li/Getty Images)
By Frank Fang

Former Chinese Communist Party leader Jiang Zemin, who single-handedly launched one of the most brutal persecutions against a faith group in modern times, died at the age of 96, according to China’s state-run media.

Jiang, who was the communist regime’s top leader from 1989 to 2002, passed away owing to leukemia and multiple organ failure. He died at 12:13 p.m. local time in Shanghai on Nov. 30, where he was once the city’s mayor.

His legacy stands as one of the worst human-rights abusers in history, responsible for countless deaths over his lead role in launching the persecution against Falun Gong in 1999.

Jiang was born on Aug. 17, 1926, in Yangzhou in the eastern coastal province of Jiangsu, a region northwest of the financial hub of Shanghai.

According to Jiang, he was adopted at the age of 13 by his uncle, a communist icon who was killed while fighting the Japanese army during World War II. While historians remain skeptical of Jiang’s claim, it’s clear he sought to distance himself from his father, Jiang Shijun. The elder Jiang was once a minister in the puppet government under Japanese occupation in the 1940s, a position that was regarded as traitorous.

According to his biography in People’s Daily, the CCP’s mouthpiece, Jiang joined the Party in 1946 while he was studying at Shanghai’s Jiaotong University.

In 1956, Jiang lived in Russia, working as a trainee at the Stalin Automobile Works, according to People’s Daily. However, there had been speculation that Jiang joined the KGB’s Far East Bureau while receiving training in Moscow.

Only weeks after the mass murder, Jiang was promoted to general secretary of the Party, the regime’s leader, replacing Zhao Ziyang, who was sympathetic to the student demonstrators.

Many believe that Jiang, who was abruptly promoted as he was about to retire as Shanghai party chief at that time, benefited the most from the military action at the country’s political center, which is estimated to have killed thousands of unarmed protesters.

In 1990, Jiang took charge of the regime’s military after Deng announced his resignation. Three years later, Jiang added the title of head of the state.

During his tenure, Jiang often touted his achievements, including bringing Hong Kong back from British rule in 1997 and enrolling the country into the World Trade Organization in 2001.

However, what Jiang never mentioned was the numerous Chinese dissidents who have been put behind bars. The suppression reached a new high in 1999, when Jiang launched the persecution of the spiritual practice Falun Gong.

The brutal political campaign also led Jiang to become the first Chinese leader to face lawsuits while in power. In 2009, Jiang and four high-ranking CCP officials were indicted for committing crimes of genocide and torture against Falun Gong at the national Spanish court.

In 2003, three Tibet support groups jointly filed a criminal lawsuit in Spain’s High Court, accusing Jiang and Li Peng, both of whom had retired as China’s president and parliament chief, respectively, of committing genocide and crimes against humanity in Tibet.

Falun Gong, also known as Falun Dafa, consists of moral teachings based on the universal principles of truthfulness, compassion, and forbearance, along with daily meditative exercises. Since its introduction in China in 1992, the practice surged in popularity, leading to an estimated 70 million to 100 million adherents in the country by the end of the decade.

On June 10, 1999, in anticipation of the anti-Falun Gong campaign, Jiang gave direct orders to establish an extra-legal Party organization for the purpose of coordinating and directing the coming repression via nationwide branches. Known as the 610 Office for the date of its creation on June 10, its structure and functions were comparable to that of the infamous Gestapo in Nazi Germany.

Jiang declared that he would eliminate Falun Gong within three months by targeting practitioners’ reputations, seizing their wealth, and attacking them physically. Practitioners murdered as a result of persecution were to be declared victims of suicide and cremated immediately, without identification. The Chinese regime mobilized all resources available to it—including the courts, propaganda departments, cultural and political institutions, and schools—in its effort to destroy Falun Gong.

State-run media—television, radio, newspapers, and later the internet—at all levels served the CCP to produce fake news slandering Falun Gong’s teachings, defaming its founder, and dehumanizing its adherents. The hate campaign manufactured many hoaxes, such as the “1,400 deaths” supposedly caused by practicing Falun Gong, the staged self-immolation at Tiananmen, and claims that Falun Gong was a threat to the Party orchestrated by overseas “anti-China forces.”

The CCP also extended its propaganda overseas to demonize Falun Gong and politicize the issue. Many international media outlets repeated the pejoratives and narratives crafted by the CCP to frame Falun Gong, effectively pushing the persecution to the global stage by priming audiences to misunderstand or feel hostility towards the practice.

The Chinese regime under Jiang’s leadership made liberal use of extreme violence, constant propaganda, and brainwashing tactics in its bid to force Falun Gong practitioners to choose between their faith or their lives. Over the course of the persecution, millions of people have been imprisoned or held in labor camps, detention centers, insane asylums, drug rehabilitation facilities, or unofficial “black jails” for refusing to give up their beliefs.

Human rights groups have documented over 100 methods of torture used by the Chinese authorities to persecute Falun Gong, as well as the use of toxic, nerve-damaging substances. Many practitioners died, were maimed, or went insane as a result of this abuse.

The number of deaths caused by the persecution is difficult to estimate, due to the difficulty of transmitting information out of mainland China. Minghui.org, a U.S.-based website founded by Falun Gong practitioners to document the persecution, has confirmed and verified the deaths of 4,828 people at the hands of the authorities for refusing to abandon their faith in Falun Gong.

However, experts believe the real number is likely to be vastly higher given that many deaths go unreported, or due to the victims having been murdered under conditions of utmost secrecy—such as for the harvesting of their organs.

Besides physical and psychological torture, the Communist Party under Jiang also imposed measures to shut Falun Gong out of public life. Adherents were fired from their jobs, expelled from school or college, or deprived of pensions and other welfare benefits. Relatives of practitioners have also endured great suffering, with the repression having broken up countless families.

In 2006, a woman from northeast China living in the United States became the first witness to speak out about organ harvesting, when she testified that her ex-husband had removed the corneas of thousands of Falun Gong practitioners since the early 2000s.

In the years since, the World Organization to Investigate the Persecution of Falun Gong (WOIPFG) and other independent researchers have conducted extensive investigations and verified organ harvesting allegations. One investigator called it “a form of evil we have yet to see on this planet.”

In 2016, investigators David Kilgour, David Matas, and Ethan Gutmann jointly published a 700-page report on forced organ harvesting in China. They estimated that Chinese hospitals performed 60,000 to 100,000 transplant surgeries on an annual basis, and that the chief source of donors was Falun Gong practitioners.

In 2019, an independent people’s tribunal consisting of a panel of lawyers and experts found, beyond a reasonable doubt, that the Chinese regime had for years, and continues to, harvest organs from living prisoners of conscience “on a significant scale,” and that Falun Gong practitioners were the main source of organ supply. The tribunal ruled that this amounted to crimes against humanity.

In 2002, Jiang transferred the title of party secretary to Hu Jintao, and the head of state a year later. But he maintained the position as the head of the Party’s Central Military Commission, overseeing the regime’s military until 2004.

Even after he gave up all his titles, Jiang continued to wield political influence from behind the scenes through his loyalists.

Many of Jiang’s allies, known as the “Shanghai Gang,” were still in the military, judiciary, security apparatus, and regional governments when Xi Jinping, the regime’s current leader, came into office in 2012.

Among them is Zhou Yongkang, a former member of the CCP’s Political Standing Committee and former head of the regime’s internal security apparatus.

In support of his patron Jiang, Zhou faithfully implemented the persecution of Falun Gong. Zhou, who was the Party leader in southwest China’s Sichuan Province, rewarded those in prisons and labor camps with financial rewards for actively torturing the faith group’s adherents, according to Minghui.org. Zhou was also likely to have a leading role in facilitating forced organ harvesting.

In 2015, Zhou was sentenced to life in prison for receiving bribes, abuse of power, leaking state secrets, among other charges. Zhou’s sentence was portrayed by China’s state-backed media as a victory in Xi’s anti-corruption campaign.

Over the years Xi has tightened his grip over the Party, purging figures from Jiang’s camp. Xi firmly cemented his control at October’s 20th Party Congress, when he secured his third term in office and installed four of its allies into the seven-member Politburo Standing Committee, the Party’s inner sanctum.

The persecution of Falun Gong practitioners over the past two decades has consumed an enormous amount of financial, human, and societal resources while costing the Chinese state and people an incalculable fortune.

The Jiang clique mobilized millions of personnel to carry out the persecution. The salaries, bonus wages, overtime pay, and other benefits allotted to this group exceeded 100 billion yuan in annual expenditure.

Examples of other costs associated with suppressing Falun Gong include the use of financial rewards encouraging ordinary citizens to report practitioners to the authorities, the hiring of overseas agents and thugs to stalk and harass Falun Gong communities abroad, purchases of overseas Chinese-language media to defame Falun Gong, and foreign aid offered to developing countries in exchange for supporting China’s human rights record at the United Nations and in other international fora.

To expose the extraordinary, unprecedented malfeasance of Jiang’s rise to power and reign, The Epoch Times published a book-length series in 2014 titled “Anything for Power: The Story of China’s Jiang Zemin.”

In 2020, The Epoch Times followed with a second work focused on his corrupt reign, titled “Unbridled Evil—The Corrupt Reign of Jiang Zemin in China.”