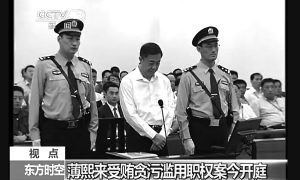 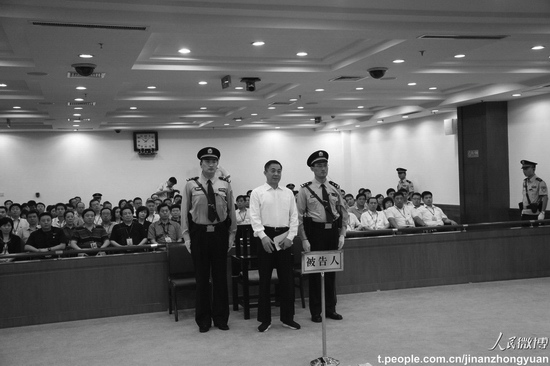 Bo Xilai stands between two officers at the court in Jinan, the capital of Shandong Province, on Sunday. He was sentenced to life in prison. (Weibo.com)
China

Bo Xilai Is Sentenced to Life in Prison

Bo Xilai, the most significant high-level Chinese Communist Party politician to be purged in a power struggle in recent memory, was sentenced to life in prison and the lifelong deprivation of his political rights on Sept. 21. All his personal assets were also to be confiscated. The sentence was handed down by the Jinan Intermediate People’s Court, through its Weibo account, at the end of a nine page judgement that rehearsed the prosecution’s case against Bo, focused on the triptych of crimes of “bribery, corruption, and abuse of power.”

The trial of Bo Xilai, and the extraordinary events that led up to it, have been a matter of intense focus for observers in China and around the world since last year. Bo’s case has been enormously important to the Chinese political system because of the danger he posed to the central leadership, and the crisis that his designs on power brought within the regime.

The announcement of the verdict of Bo Xilai on Sunday morning was preceded by an intensive level of speculation, discussion, and suspense.

The sole source of information about the trial has been the official Weibo account of the Jinan Intermediate People’s Court, in the capital city of Shandong Province. Weibo is a Twitter-like microblogging platform popular in China.

At just past 10:00 a.m. in China, the court posted to its Weibo account: “The presiding judge is reading the ruling.” Within minutes the sentence was forwarded by users over 4,000 times.

The decision was soon posted in initially seven, then nine segments, each of them retransmitted thousands of times. A picture of Bo, standing between two police officers taller than him, was also posted.

In page after page of the decision, the judge refuted Bo’s spirited defense and explained why all the charges stood and were proven by the evidence provided. “The defendant and the defending counsel’s arguments and defense cannot be substantiated, and this court does not accept them,” was one of the regularly used phrases.

The court said that Bo was guilty of accepting bribes to the tune of 20 million yuan ($3.2 million), embezzling 5 million yuan ($816,000), and abusing his power in the case of his wife’s murder of Neil Heywood. Many analysts had remarked on the relative mildness of those numbers, given that village-legal Party officials have been reported to abscond with hundreds of millions of dollars.

“This outcome is basically what everyone suspected,” said Shi Cangshan, an independent analyst of Party affairs based in Washington, in a telephone interview. Shi said that the accusations that Bo had faced rarely could have resulted in a death penalty, effectively removing the possibility that he would be given a suspended death sentence, which was one of the main other lines of speculation alongside life imprisonment.

Before Feb. 6, 2012, Bo was known only as an ostentatious and mercurial Communist Party boss that ruled the southwestern megapolis of Chongqing. He organized the masses to sing revolutionary songs, recalling the days of Maoist mobilizations and parades, and ruthlessly attacked political enemies that he labelled as gangsters. His public security services, led by his longtime confidant, sidekick, and police chief of the city, Wang Lijun, would extract confessions from rival businessmen while stripping them of their assets.

Together, these activities were known as “Singing Red and Smashing Black.”

Then in February, Wang Lijun defected to the American consulate in Chengdu, several hours drive away by car. The consulate was reportedly soon surrounded by paramilitary vehicles, whose presence was orchestrated with the assistance of one of Bo’s powerful patrons, Zhou Yongkang, the former security chief. Over 30 hours after he entered, American officials released Wang into the hands of a security and intelligence official from Party Central in Beijing, rather than Bo’s group.

The narrative that has been spread by Communist Party propaganda organs, and in large part tacitly accepted in Western media reportage of the matter, is that Wang Lijun had gone to the American embassy to unveil Bo’s coverup of a murder committed by his wife, Gu Kailai, of British businessman Neil Heywood, with whom she had dealings.

Bo’s five-day trial in August was replete with theatre about the Wang-Bo-Gu triangle, said to involve a love affair, and the family dynamics between Bo Xilai and his wife and son, Bo Guagua, who now attends the Columbia University School of Law.

Epoch Times has reported, based on information provided by sources inside China, that Bo had formed a conspiracy with other top members of the Party to effectively seize power in the regime. A key member of this alliance was Zhou Yongkang. Zhou is now, according to recent disclosures, at the center of converging investigations into corruption in several portfolios that formed the core of his career, including the oil industry and the province of Sichuan.

Zhou and Bo were the core of former Party leader Jiang Zemin’s attempt at maintaining a strong level of influence in the operations of the regime, even over a decade after he has held no official posts. This was to be part of Jiang’s attempts to ensure that key parts of his legacy, most particularly the persecution of the Falun Gong spiritual practice, were not overturned by later leaders.