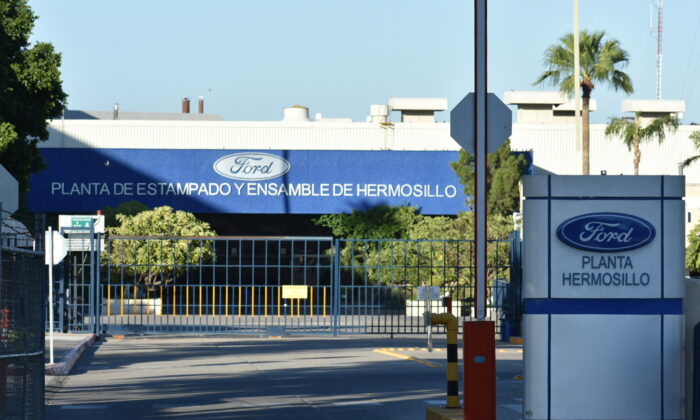 General view shows a part of a plant's facade after U.S. automaker suspended production for two days at the Mexico plant due to material shortage, in Hermosillo, Mexico on Oct. 11, 2021. (Omar Gustavo Cordova/Reuters)
Companies

MEXICO CITY—U.S. automaker Ford Motor Co. will temporarily suspend production on Friday at its Hermosillo plant in Mexico’s Sonora state due to a shortage of materials, the plant’s labor union said on Thursday.

Workers will be paid 75 percent of salaries on Friday, the union added.

Ford had also suspended production from Oct. 11–12 at its Hermosillo plant, where it makes its Bronco Sport SUV and Maverick compact pickup.

The union did not specify which materials were in short supply, but other automakers have been struggling with a chip shortage as manufacturers shifted production toward parts needed for laptop computers, cellphones, and video games during the pandemic.

Ford did not immediately respond to a request for comment.

Earlier this month, Ford said it would suspend production at its Flat Rock, Michigan, plant and at parts of its Kansas City, Missouri, plant.