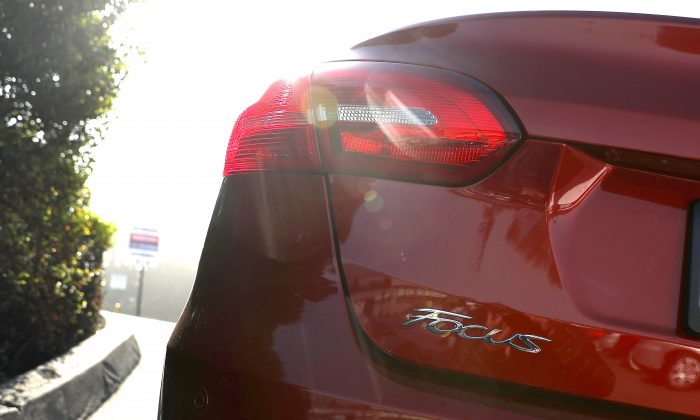 The Ford Focus is displayed on a brand new Ford Focus car at Serramonte Ford in Colma, Calif., on Oct. 25, 2018. (Justin Sullivan/Getty Images)
US News

The recall affects some 2012 and 2017 Focus models and some 2013-14 Focus ST models in North America. The powertrain software in some of these cars may not work properly, which could deform the fuel tank.

“If this occurs, the customer may observe a malfunction indicator light, inaccurate or erratic fuel gauge indication, drivability concerns or loss of motive power,” a statement from Ford reads. “Ford is not aware of any reports of accident or injury related to this condition.”

The issue is actually connected to another recall from October, when nearly 1.5 million Focus cars were recalled for the same issue. According to Ford, some cars were improperly serviced for that recall, which is why they are issuing another one.

Ford says those who are affected can take their cars to their dealers, who will reprogram the software and replace any parts that were affected.

Ford recently retired the regular Focus model and discontinued all but two models in North America.

Ford said it will cut 12,000 jobs in Europe by the end of next year to try to return the business to profit, part of a wave of cost reductions in an auto industry facing stagnant demand and huge investments to build low emission cars.

In January Ford announced a sweeping business review which included the prospect of plant closures and discontinuing loss-making vehicle lines to pursue a 6% operating margin in Europe.

But demand for cars in Europe is falling, European automobile manufacturers’ association ACEA said on Thursday, predicting that European passenger car registrations will shrink by 1% in 2019 to 15 million cars, revising its previous forecast of 1% growth.

Car sales will stagnate or decline in the next three years, AlixPartners said in a survey of the industry published this week. Manufacturers balancing sales of electric and combustion engined cars will see margins hit particularly hard, the survey said.

Ford said it intended to double the profitability of its commercial vehicle business in Europe in the next five years, supported by a restructured Ford Sollers joint venture in Russia and a strategic alliance with Volkswagen.

Earlier this year Ford said it would seek to exit the multivan segment and focus on developing electrified versions of more profitable “crossover” and sports utility vehicles.

European passenger vehicle development, including for battery electric vehicles, will be centered in Cologne, the carmaker said.

Ford also said it expected to triple passenger car imports into Europe by 2024 by selling Mustang and Explorer vehicles, including a Mustang-inspired electric car in late 2020.