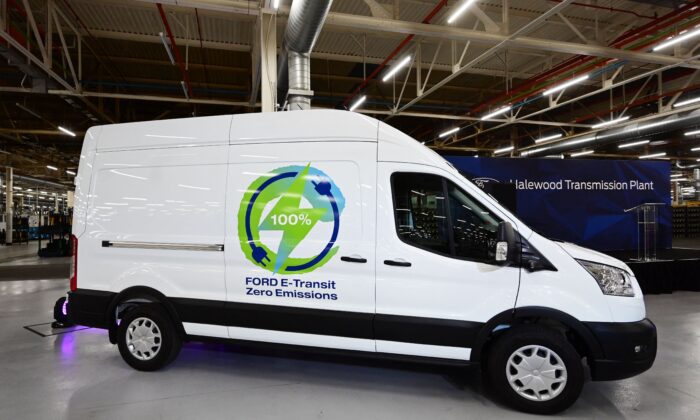 A Ford E-Transit van is seen on display at the Ford Halewood plant in Liverpool, North West England, on Oct. 18, 2021. (Paul Ellis/AFP via Getty Images)
Economy

Deliveries for the electric E-Transit in the U.S. will begin in the coming weeks.

Ford had previously opened reservations for the electric E-Transit in May last year and said the electric commercial van is expected to go on sale early this year.

The electric E-Transit is key to Ford’s strategy to gain market share in the commercial van category.

The automaker had in September revealed 24,000 reservations for the E-Transit.

Ford is expecting the popularity of its full-size pickup truck F-150 and Transit commercial vans to trickle down to its electric variants as well and help it compete with electric-vehicle market leader Tesla Inc..

Farley had in May this year told investors the automaker plans to electrify its most iconic models and restated plans to launch a commercial self-driving business by 2022.