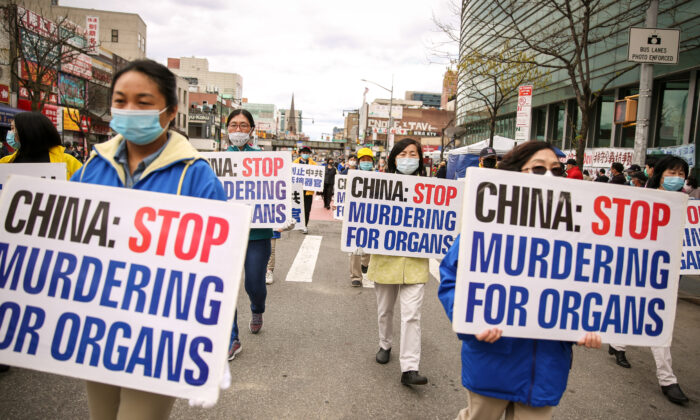 The Chinese regime’s forced organ harvesting from political and religious prisoners “should be brought up any time the United States and communist China are at the negotiating table,” according to Gary Bauer, who sits on the U.S. Commission on International Religious Freedom (USCIRF).

“I think a lot of the world was in denial about it for a long, long time. But the evidence is becoming overwhelming that that is something that communist Chinese are engaged in,” the commissioner said in an April 21 interview with The Epoch Times.

The independent panel in the annual report released on the same day called out China as one of the world’s “egregious violators” of religious freedom. Allegations of the regime’s state-sanctioned organ harvesting have emerged since 2006, with researchers and investigators noting China’s short waiting times and the seemingly on-demand organ supply. A people’s tribunal in 2019 after a year-long investigation concluded that the practice has taken place “on a significant scale,” and that practitioners of Falun Gong were “probably the principal source.”

“There is no evidence of the practice having been stopped,” the tribunal said in its 160-page final judgment issued last March.

In early March, a bipartisan group of U.S. lawmakers introduced to the House and the Senate the Stop Forced Organ Harvesting Act to confront the issue. Nury Turkel, another USCIRF commissioner, warned during a virtual press conference on Wednesday that the forcible practice has likely extended to Uyghur Muslims detained in concentration camps.

“They are even marketing Uyghur organs in the Muslim majority countries,” Turkel said, noting reports of wait times as short as 48 hours.

“The very idea that in 2021, a powerful nation like communist China would be harvesting organs from prisoners or religious minorities who are being persecuted, it’s almost unbelievable,” said Bauer.

Falun Gong, a Chinese spiritual discipline that became immensely popular in the country in the 1990s, was subjected to brutal suppression beginning in 1999. Over the past 22 years, adherents have faced continued arrest, harassment, slave labor, and psychiatric drugs, among other torment methods crafted to make them renounce their faith. Experts observed that the same persecution methods have since become the blueprint for the Chinese regime to repress other religious groups, notably the Uyghur Muslim population in the Xinjiang region.

“The Chinese Communist Party is deeply threatened anytime any of its citizens are devoted to a philosophy or a faith that is more important to them than the Communist Party of China,” Bauer said.

“I wish 20 years ago the United States would have listened more to the Falun Gong because they were warning the world all the way back in the 1990s and early 2000s, that communist China was a very repressive regime and would not liberalize as long as they were under communism.”

The Chinese regime’s treatment of Uyghurs in Xinjiang has gained attention worldwide. Legislators in the United States and elsewhere are calling for the Olympics to be moved out of Beijing so as not to give the regime a platform to whitewash its image.

While endorsing such sentiment, USCIRF’s Vice Chair Tony Perkins noted that communist China’s human rights repression is far wider, with the Christian community under worsening persecution in recent years. Perkins and Chair Gayle Manchin both became targets of Chinese sanctions for being vocal about Xinjiang.

Given “what they’re doing to their own people” in China and abroad, “it’s hard to trust the Chinese government,” Perkins told The Epoch Times on Wednesday.

From the commission’s perspective, “we see them as a hostile body as not an ally or a colleague, but the enemy of religious freedom,” he added.

In 2020, at least 42 elderly Falun Gong practitioners died due to the persecution, the oldest among them 92, according to Minghui.org, a U.S.-based clearinghouse that collects first-hand evidence on the persecution.

“This is unacceptable. Civilized nations do not engage in this kind of horrendous activity,” he said.

“The communist Chinese government feels like it could do anything that it wants to, to torment or injure or hurt those people that they are living over,” he added. “That is outrageous, and it must stop.”

“The big choice for the world in the 21st century,” he said, will be one between freedom and human dignity represented by the United States and other Western countries, versus the “oppressive model of communist China that routinely persecute the Falun Gong, Muslims, Christians, Buddhists, and so many other groups.”

April 25 marks the 22nd anniversary of a peaceful Falun Gong appeal, which saw 10,000 adherents gathered at the communist leadership headquarters in Zhongnanhai to ask for their rights of belief. Remarking on the occasion, Bauer expressed hope that international human rights groups could take the opportunity to speak out on the group’s behalf and help end the ongoing abuses.

“Falun Gong and any other group and communist China should have the right to peacefully assemble and to follow the dictates of their heart,” he said.

“My hope is that still in my lifetime, I will see the day when all the people living under the Communist Party in China will be free, and have all the basic liberties and rights that we all too often take for granted here in the United States.”