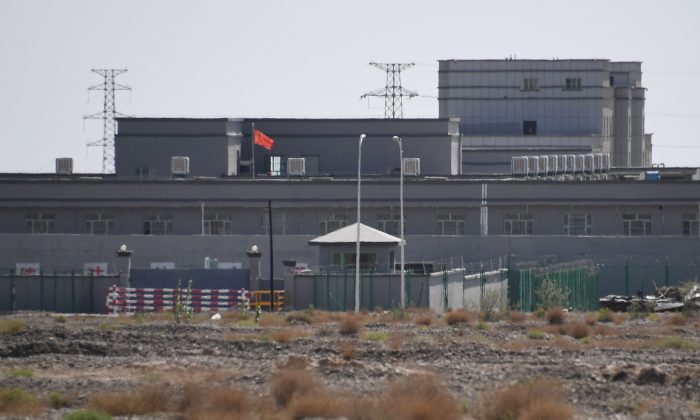 A facility believed to be a re-education camp where mostly Muslim ethnic minorities are detained, in Artux, north of Kashgar in China's western Xinjiang region, on June 2, 2019. (Greg Baker/AFP/Getty Images)
China Human Rights

Sairagul Sauytbai, an ethnic Kazakh who fled China last year after working in a so-called vocational training center for ethnic minorities, wanted to tell others about the beatings and torture she said she had seen there.

Sauytbai, 42, worked as a kindergarten principal in Xinjiang’s Ili Kazakh Autonomous Prefecture when she was suddenly forcibly recruited in November 2017 to teach Chinese language and culture, as well as Communist Party doctrine, to inmates of a camp.

Sauytbai’s husband and two children had already moved to Kazakhstan, but her passport had been confiscated, preventing her from joining them. When she got to the camp, she was appalled by the treatment of inmates, and saw beatings and torture.

Four months later, the authorities sent Sauytbai back home, where she was sacked from her kindergarten job. Fearing that she would soon be sent to a camp as an inmate, she sneaked into Kazakhstan illegally through Khorgos, a duty-free trade zone on the border.

Sauytbai was soon detained in Kazakhstan and tried, but a court ruled against sending her back to China and gave her a suspended sentence.

She then applied for asylum, but a state commission turned her down, saying it had not found sufficient evidence of persecution. Last month, she and her family left for Sweden, where she has applied for residence.

Speaking to Reuters in the Swedish town of Trelleborg, Sauytbai said Kazakh security agents had warned her against criticizing China.

“After I came to Kazakhstan, having witnessed it all, I wanted to tell the whole world about it,” she said. “But the National Security Committee and my (former) lawyer Abzal Kuspan kept my mouth shut.”

Kuspan confirmed he had advised her not to talk about the Chinese camps to avoid jeopardizing her court case and her asylum request: “Our first concern was making sure she was not handed over to China.”

He said he was aware that Sauytbai had come under pressure, especially immediately after her detention in Kazakhstan.

“She was kept in some building, she was stripped naked,” he said.

Kazakhstan’s National Security Committee did not reply to questions from Reuters about Sauytbai’s allegations. China‘s foreign ministry said that “the facts of Sairagul Sauytbai’s credit fraud and illegal border crossing crimes are clear and they must be punished severely.”

Sauytbai’s family have told Kazakh media that they had an outstanding bank loan in China which they had planned to repay by selling their house—until she had to flee.

Human rights groups say China has detained at least a million people in camps set up throughout Xinjiang, a region where Muslim Uyghurs are the biggest ethnic group and where ethnic tensions have in the past resulted in violence. Beijing says the camps are “vocational training centers” designed to help prevent terrorism and extremism.

However, former camp inmates have described them as prisons and told Reuters that people could be held there for months, being indoctrinated in Communist ideology.