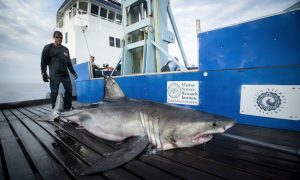 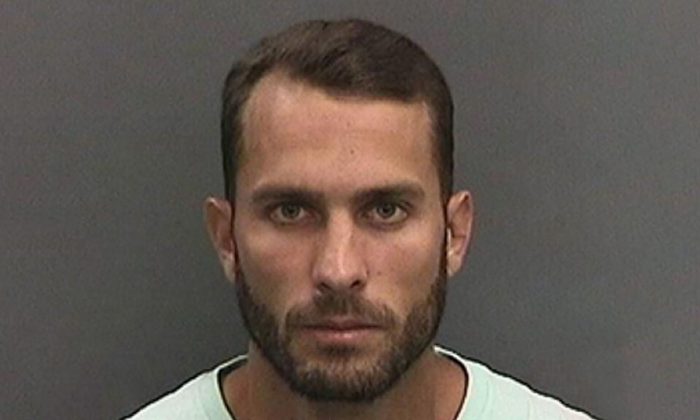 In connection with an incident in July 2017 involving a shark being dragged behind a boat, Robert Lee Benac III was sentenced to 10 days in jail on Sept. 12, 2019. (Hillsborough County Sheriff)
Crime and Incidents

A Florida fisherman who was filmed dragging a shark from a boat will spend 10 days in jail after pleading guilty to misdemeanor animal cruelty.

Robert Benac III took the plea on Thursday, Sept. 12, and will serve the time over the course of five weekends, according to the Bradenton Herald.

Benac was the third man to face charges stemming the incident, which took place near Egmont Key in Florida.

Footage of the shark being dragged to its death from a boat was recorded in June 2017 and shared online, where it sparked outrage. The video was accompanied by a graphic photograph showing what appears to be the same shark torn to shreds.

As the video spread through social media during the summer, it was referred to the Florida Wildlife Commission (FWC) by a celebrity shark fisherman.

After four months of investigation, the WFC announced on Dec. 12, that three individuals have been charged.

The WFC said it had carried out “exhaustive research” into the suspects’ social media activity, done numerous interviews and consulted with many shark experts. Other videos were later found, the Herald reported, which purportedly showed the men shooting a shark and pouring alcohol down the throats of live fish.

“As we’ve said since this video and other images came to light, these actions have no place in Florida, where we treasure and conserve our natural resources for everyone,” said Commission Chairman Bo Rivard. “It is our hope these charges will send a clear message to others that this kind of behavior involving our fish and wildlife will not be tolerated.”

The suspects, besides Benac, were Michael Wenzel, the driver of the boat in the clip, and Spencer Heintz. They were all charged with two counts of Aggravated Animal Cruelty, a third-degree felony which in theory carries a maximum punishment of 5 years imprisonment, a $10,000 fine, or both. Wenzel and Benac faced additional charges, including Illegal Method of Take.

In addition to the jail sentence, Benac was given 11 months of probation, ordered to pay a $2,500 fine and perform 250 hours of community service, 125 of which must be spent at an animal shelter, the Herald reported.

Charges against Heintz were eventually dropped, according to the Bradenton Herald.

Apparently proud of the video clip that was eventually to land them in custody, they shared it online in July.

The clip found its way to a local Florida celebrity fisherman, Captain Mark “Mark The Shark” Quartiano, as if to show off and seek praise. He believes one of the men on the boat sent it to him.

He sent the clip to the WFC in disgust, hoping that the men would be prosecuted.

“This is just really sick, one of the most horrific things I have seen in 50 years of professional sport fishing,” Quartiano said at the time, according to WESH.

“There’s just no reason for this behavior,” he said.