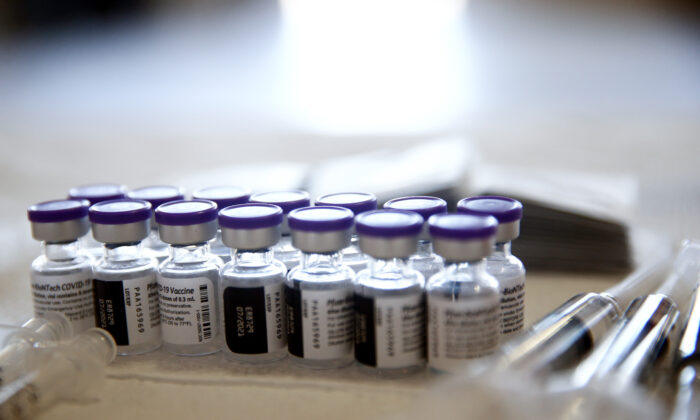 Vials containing doses of the Pfizer COVID-19 vaccine are viewed at a clinic in Los Angeles, Calif., on April 9, 2021. (Mario Tama/Getty Images)
Florida

A Florida landlord who owns eight apartment complexes has told his tenants that they need to get the COVID-19 vaccine or face eviction.

Santiago A. Alvarez, 80, who owns properties in Broward and Miami-Dade counties, told new tenants and his employees that they had to show proof of vaccination by Aug. 15, while existing tenants need to provide proof of vaccination before their leases are renewed. He confirmed the directive to the Washington Post on Sept. 15.

His attorney, Juan C. Zorrilla, claimed that the directive isn’t violating Gov. Ron DeSantis’s order barring the usage of vaccine passports in the state. Tenants, he argued, are not patrons or customers and Alvarez isn’t providing them with a service. The lawyer also said that Alvarez is willing to make exceptions for people who choose not to get the vaccine for religious or medical reasons.

However, a spokesperson for DeSantis’s office, Christina Pushaw, said that Alvarez is indeed violating state law with the rule.

The landlord, she told the Post, “can’t require vaccine passports as a condition of entry or service” and said that “the law is very clear.” This week, as the law goes into effect, the state Department of Health will issue $5,000 fines to businesses, government offices, and schools that mandate proof of COVID-19 vaccination, Pushaw added.

“Florida law is clear. A business owner cannot require vaccine passports as a condition of entry. Each violation of the law will result in a $5000 fine,” Pushaw told Breitbart News on Thursday.

“As Governor DeSantis said, nobody should lose their job over these unscientific and overreaching vaccine mandates. The same goes for housing; nobody should be denied a roof over their head because of a personal medical decision,” she continued.

Some tenants in Alvarez’s building said they were appalled by the vaccine directive.

“No one wants to live anywhere where they are not wanted. … If that’s the case, then I might as well get out,” Jasmine Irby, a security guard, told the Post. “It was just best that I walked away.” Irby said she filed a complaint with the Florida Department of Agriculture and Consumer Services so she could renew her lease without having to disclose private health information to her landlord.