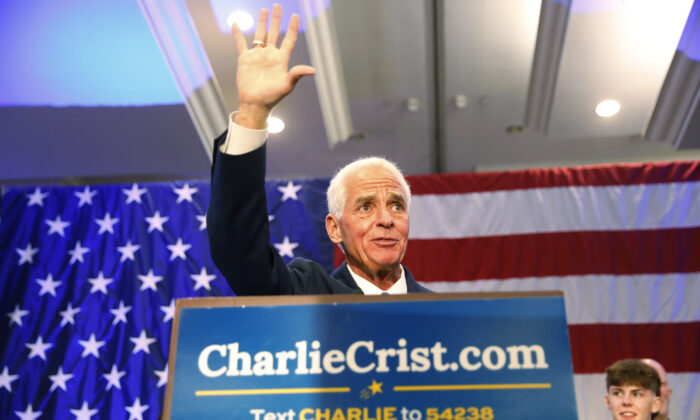 5 Takeaways From Aug. 23 Primaries in Florida, New York, and Oklahoma

Florida, New York, and Oklahoma voters headed to the polls on Aug. 23 for their primary elections, moving one step closer to the Nov. 8 general election.

Here are five key takeaways from the primaries:

Charlie Crist, who served as Florida’s governor from 2007 to 2011 as a Republican before switching parties, decisively defeated state Agriculture Commissioner Nikki Fried and two other challengers to capture the Democratic gubernatorial nomination.

Crist tallied almost 60 percent of the vote, with more than 95 percent of the results report, according to Decision Desk HQ. Fried received 35 percent.

In November, Crist will face Republican Gov. Ron DeSantis, three write-in candidates, a Libertarian, and two others with no party affiliation. Considered a potential 2024 presidential candidate, DeSantis ran unopposed in the GOP primary.

In his victory speech, Crist said of DeSantis that “this guy wants to be president of the United States of America and everybody knows it. However, when we defeat him on 8 November, that show is over.”

If elected, Crist vows to reverse much of what DeSantis has signed into law.

Rep. Val Demings, who represents Florida’s 10 District in the U.S. House, won the Democratic primary for the U.S. Senate, topping three rivals with a resounding 84 percent of the vote. The former Orlando police chief will face incumbent Republican Sen. Marco Rubio, who has served in the Senate since 2011.

Neither lawmaker was willing to run in another part of the city.

The 76-year-old Maloney, who is the first woman to chair the House Oversight and Reform Committee, is known for her longtime advocacy on behalf of Sept. 11 first responders seeking compensation for diseases they attribute to contamination from the collapse of the World Trade Center.

During his victory speech, Nadler said he and Maloney “have spent much of our adult lives working together to better both New York and our nation.”

“I speak for everyone in this room tonight when I thank her for her decades of service to our city,” he said.

Maloney became the 13th congressional incumbent to lose a reelection bid in the primaries and the sixth to fall to a fellow incumbent after post-2020 Census reapportionment placed them in the same congressional district.

Elsewhere in New York state, Ulster County Executive Pat Ryan, a Democrat, defeated Dutchess County Executive Marc Molinaro, a Republican, in a special election for the 19th Congressional District, which covers the Hudson Valley. Democrat Antonio Delgado had represented the district until he was tapped to become the state’s lieutenant governor in May.

Ryan held 51 percent of the vote when The Associated Press called the race not long after midnight. President Joe Biden won the swing district by fewer than 2 percentage points in 2020.

Ryan called his campaign “a referendum” on Roe v. Wade, and his TV spots focused on electing a representative who would support abortion rights. Molinaro centered his campaign on reducing crime and inflation.

Ryan will finish Delgado’s term. He and Molinaro will run for full terms in neighboring districts set by New York’s new congressional maps.

The current 19th District has voted for the winner in every presidential election since 1996.

Since the 117th Congress convened in January 2021, there have been 15 special elections to replace elected representatives, including nine during the 2022 midterm cycle.

Reed, a Republican, who had already announced his intention to not seek reelection, resigned in May to work for a lobbying firm.

Incumbent GOP U.S. Reps Matt Gaetz and Kat Cammack easily won their primaries. In central Florida, three Republicans earned victories and will be favored for open congressional seats as the Republican Party strives to regain a majority in the U.S. House.

Mills, a constitutional conservative who served with the 82nd Airborne Division in Iraq and Afghanistan, is a foreign policy expert who often appears on Newsmax, Fox News, OANN, and other conservative media outlets.

CD 7 featured contenders who were adamantly pro-Trump and campaigned on “America First” platforms.

Democrats currently occupy both of those seats. One of them is Crist, who decided to forgo reelection in the 13th District to run for governor. The other is three-term Rep. Stephanie Murphy (D-Fla.) in the 7th District; in December 2021, she announced that she wouldn’t seek reelection in a district that she has represented since 2016.

Lauren Lee, who served as Florida’s secretary of state for four years before resigning earlier this year, defeated four challengers to win the GOP primary for the open 15th District, a new district that covers Hillsborough and Polk counties between Tampa and Lakeland.

Florida gained a 28th congressional district in the post-2020 census reapportionment. In addition, the state’s Republican-controlled Legislature adopted a new map of districts that survived court challenges. The redrawn districts could expand the GOP’s majority in the state’s congressional delegation to as dominant as 20–8 from its current 16–11, some analysts say.

In the first round of the primary in late June, Mullin received 43.6 percent of the vote, which was before he was endorsed by Trump, while Shannon finished second at 17.5 percent in a field of 13 candidates. Since neither surpassed 50 percent, a runoff was required to determine the GOP nominee.

Inhofe, 87, was elected to a fifth term in 2020 before announcing in February that he would retire at the end of this year. That prompted the special election.

In November’s general election, Mullin will face Democrat Kendra Horn, who was a U.S. representative in Oklahoma’s 5th District from 2019 to 2020.

Republicans are heavily favored to prevail in the general election, which made the GOP primary especially significant. Oklahoma voters haven’t elected a Democratic U.S. senator in more than 30 years.

Mullin is a former professional MMA fighter and entrepreneur who owns a ranch and a plumbing company, among other enterprises.

As of Aug. 23, 44 states have held their primaries, which have set the stage for November races that will determine majorities in the U.S. Senate and House of Representatives.

Massachusetts, where nine House seats are up for grabs, is up next, with its primary set for Sept. 6, while Delaware, New Hampshire, and Rhode Island follow on Sept. 13.