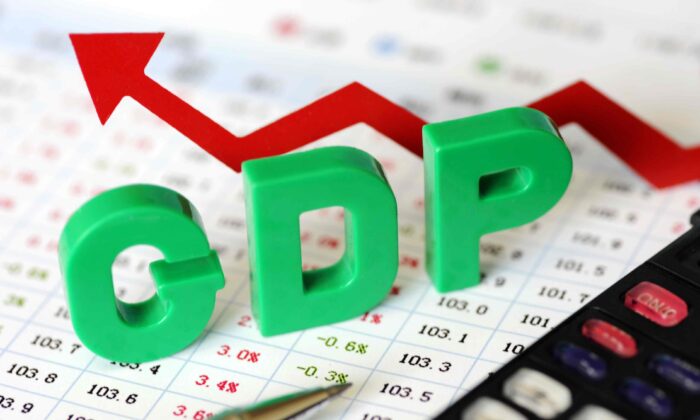 First-quarter GDP (gross domestic product) numbers are among the most confusing numbers the government has ever produced. The only two clear conclusions we can draw are that inflation continues to soar and the economy is in serious trouble.

Let’s first clear up some confusion. The numbers show real growth declining in the first quarter after soaring at a 7 percent annual rate in the fourth quarter. This dramatic swing in economic growth never really occurred. It’s exaggerated by the way the government calculates growth. Large swings in inventories and other factors can add or subtract from what is happening in the economy and provide a misleading impression of what’s happening.

The following table shows a more insightful view of what happened to the economy during the same time period as indicated by the GDP data. All numbers are annual rates. They show employment, hours worked, and manufacturing output increasing at relatively stable rates compared to the wide difference in the GDP measure.

Various business surveys tend to confirm that the economy grew in the first quarter, albeit slightly slower than in the fourth quarter. Hence, the picture of a dramatic change in growth is misleading.

One thing the first-quarter GDP numbers clearly show is how inflation continued to soar at the highest rates in 40 years. Recent business surveys confirm that prices not only increased dramatically in the first quarter but also continued to rise at a record-breaking pace in March and early April.

What’s not immediately obvious from the latest GDP data is the extent to which the U.S. economy is deteriorating. Productivity is the key to a prosperous growing economy. Productivity is the efficiency at which the economy operates and is often measured by the amount of private output produced per hour worked.

As I discussed in a previous Epoch Times article, whenever policies have moved away from free-market classical economic principles, the U.S. economy has struggled. When government rapidly increases federal spending and puts additional regulatory burdens on businesses, it reduces the ability of businesses to respond to market pressures. The end has always been a slowdown or decline in living standards.

The explosive growth in federal spending in recent years and the latest massive increase in regulations, particularly over energy markets, have again discouraged private companies from responding to market pressures. The current soaring inflation and the decline in living standards are typical of what happens when government policies move away from classical economic principles.

While productivity data for the first quarter are not yet available, the combination of a sharp increase in hours worked and no growth implies a serious weakness in productivity. When productivity is weak, living standards suffer.

The current erosion in wages due to higher inflation not only produced a decline in living standards, but also created a difficult dilemma for policymakers. So long as productivity remains weak, even modest moves to restrain the growth in spending to contain inflation can produce a downturn in the economy.

Part of the challenge the Federal Reserve faces is of its own doing. The Fed supported the rapid increases in federal spending as well as the government’s regulation of energy markets. In this sense, the Fed has contributed to its current policy dilemma.

The only viable policy solution to the current dilemma is the one that has restored prosperity to the U.S. economy from similar problems in the past. Government policies must shift back to the free-market policies that have restored increases in living standards throughout history.

Serious limits should be placed on federal spending and debt to free up resources for the private, productive sector. Energy markets and other areas of the economy should be free from regulatory constraints that prevent businesses from effectively responding the market pressures.

Above all, policymakers should completely abandon any move to increase tax rates, which would add to the damage they’ve already done to the economy.