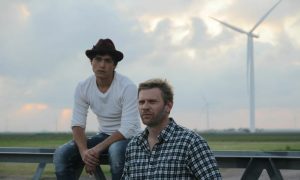 In “Reach Me,” Thomas Jane’s character, Wolfie, is an undercover cop who can’t stop shooting people dead. Some know Jane from HBO’s “Hung.”

And Father Paul can’t stop Wolfie from killing people. Although the cop comes to him constantly for confession.

On a prison rec-room TV, a talk-show host interviews a rapper, played by Nelly, who waxes poetic about the self-help book “Reach Me.” It’s so compelling that when a prison-lifer tries to change the channel, Colette (Kyra Sedgwick), who’s in jail for hubby-killing, slams the woman’s head into a wall.

“Reach Me” is a fun little ditty of a dirty movie (dirty as in violent) about all these various and sundry, fair-to-middling bad people who eventually come across this book and start trying to change their lives for the better. Their paths cross and re-cross throughout the movie.

Sylvester Stallone plays Roger’s editor, Gerald. Roger (Kevin Connolly of HBO’s “Entourage”) is a journalist who can’t quit smoking. Gerald rants about being a winner and excoriates Roger for being an ashtray no woman will ever want to kiss.

He sends Roger to find the author of “Reach Me.” He finds the man, whose name is Teddy Raymond (Tom Berenger), a reclusive former football coach, and pesters him ruthlessly, calling him a fraud, until Teddy can’t take it anymore and makes Roger stand in front of the ocean all night and scream “I’m Roger and I don’t smoke!” He is successful.

What kind of film is this? It’s definitely a comedy. Got action too. And romance. Drama also. Prison stuff. Mobsters. (Kelsey Grammer’s a kingpin.) But mostly it’s light and comedic and fun. It’s got lots of interweaving storylines. And a good message—people are empowering themselves and realizing their potential! Even bad people!

However, the violence, while minimally disturbing visually, is nonetheless otherwise disturbing because, cartoonish or not, most of these people who want to change their lives are causing others physical and mental pain while getting there.

Most of the scenes and sequences are too fleeting for any one character to develop beyond one note, except for perhaps the great Danny Aiello, who inhabits a moment so thoroughly that one wonders why we don’t get to see more of him in movies.

It would have been good to see more of the transformative process in action. There are a couple of examples of smashing an addiction by hollering at, and in—the ocean.

In spite of the film’s otherwise light tone, these examples are inspiring, although we’ve all long been familiar with what appears to be a version of the Tony Robbins school of behavior modification.

All in all, it has an overall feeling of a sort of “Pulp Fiction” lite, as well as having exploitation film aspects (mostly black and Latino people are getting beaten and shot).

Regardless, a movie about a book that helps beat addictions and move toward getting more out of life and being a better person—it’s all good.