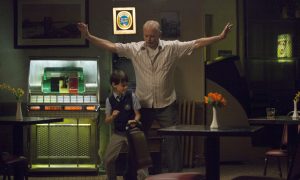 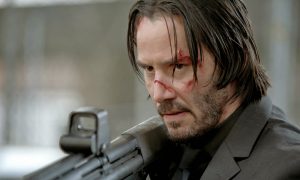 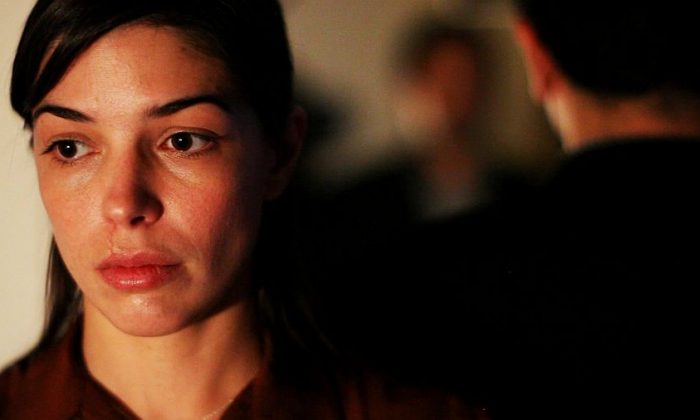 Jean-Luc Godard might be using the latest in 3-D technology, but it is in the service of his decades-old ideological and aesthetic program. He will strip away bourgeoisie affectations, like plot and characterization, in favor of wordplay and collage. However, all viewers are left with is Godard’s dog Miéville (playing Roxy) in “Goodbye to Language.”

A single man and a married woman commence an affair. It is passionate at first, but eventually turns violent. It is a familiar story, but still promising dramatic grist in the right hands. Of course, Godard cannot be bothered to develop it. Instead, he will simply dole out fragments of the mercurial relationship, in between episodes of linguistic gamesmanship.

As is usually the case with recent Godard films, viewers had better come prepared to read, because the auteur will explicitly tell them just what and how they should think. That might sound problematic in a 3-D film like “Language,” but Godard uses the effect to privilege certain words above others. It might be the only clever aspect of the film.

Much has been made of the superimposition of 3-D images in one sequence, in which different scenes can be seen out of either eye. Unfortunately, neither is particularly interesting. Indeed, the film’s drably pedestrian visuals are arguably its greatest sin.

For all of its gamesmanship, it looks stylistically similar to early 1980s experimental films, like Joan Jonas’s “Volcano Saga” or “Double Lunar Dogs,” but without similar hooks for the audience to grab on to.

Arguably, we are not supposed to luxuriate in lush imagery, because that too would be bourgeoisie. Godard would rather goad us with dashed-off would-be profundities, such as the observation that Hitler fulfilled all his promises (except, presumably that 1,000-year Reich thing), which only a Parisian Maoist could find provocative. There is so little in Godard’s kit bag this time around that he frequently resorts to the oldest, cheapest trick in the book: sudden deafening blasts of noise.

Frankly, this film has no reason for being, because Godard and his fellow traveling poststructuralists won the philosophic day decades ago. “Language” represents the state of critical and aesthetic thinking in today’s academia, chapter and verse. They just never had a plan for winning the peace, so the old discredited forms still hold sway over the popular culture.

As if on cue, Lord Byron, Percy Shelley, and Mary Shelley pop up as representatives of the old order to be swept away. Yet, each has more currency to the lives of ordinary proletarians than any of Godard’s films have, since at least the 1980s.

The 3-D aside, there is nothing in “Language” that has not been done before and done better. It is possible to jettison narrative and still produce something intriguing. Whether they speak to readers or not, the novels of Alain Robbe-Grillet are impressive because he removes narrative and character, yet they still retain the form of mystery novels. In effect, he pulls the tablecloth out from under the place settings, without upsetting a glass. In contrast, with “Language,” Godard simply kicks over the table and then takes an ostentatious bow.

As a work of cinema, “Language” is dreadfully slight, but that is not really how it should be judged. It is really part of a wider piece of performance art, in which Godard keeps testing the limits of how little he can give the film festival intelligentsia while still maintaining their adulation.

You’re being punked, so stop encouraging him. Not recommended, “Goodbye to Language” opened Wednesday, Oct. 29, at the IFC Center.