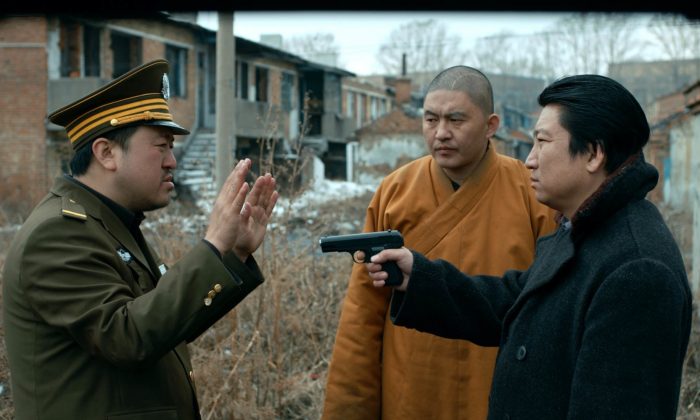 Zhang Zhiyong is a soap salesman just like Ryan O’Neal who sold Bibles in “Paper Moon” and Robert Preston who sold musical instruments in “The Music Man,” except his con is even more predatory. The blighted Northern provincial town in China is no River City, but trouble is coming just the same in “Free and Easy,” by Hong Kong director Jun Geng.

Here is how it works: Zhang Zhiyong blows into town and introduces himself to a bystander, offering him a free sample of a bar of scented soap. When the mark sniffs it, he falls unconscious, allowing Zhang to lift his wallet and valuables. At least that is how it is supposed to work.

‘Free and Easy’ is still smart and archly funny.

Christian convert Gu Benben is so congested he does not keel over like the other two men he was proselytizing to. Actually, the Christian evangelism is just an excuse to hand out flyers for his decades-missing mother.

Xu Gang, the phony dispossessed monk does not inhale either, but when the fumes from the freebie finally fell him, Zhang finds he has nothing worth stealing.

Soon word of Zhang and his knockout soap reach the local constabulary, but instead of hunting down the con man, corrupt copper Zhang Xun tries to use the soap on Zhang’s new pretty landlady, Chen Jing. She wants absolutely nothing from or to do with him.

Chen’s husband Xue Baohe understandably resents Zhang Xun’s pursuit of his wife, but he has other problems distracting him. Some person or persons unknown has been harvesting the trees he has been planting along the highway as part of a rare re-forestation campaign, thereby putting his own position in considerable jeopardy.

Granted, conman Zhang Zhiyong and fake monk Xu Gang might not be perfect, but there is no question officer Zhang Xun is the scummiest villain in “Free and Easy,” which is well in keeping with popular attitudes towards the People’s police.

The ensemble is aces all around, especially Zhang Zhiyong, who raises stone cold flintiness to an art form as his namesake (apparently, that is a self-referential thing for many of the principles).

Xue Baohe probably pulls off the most surprises as the formerly cringe-inducing forester Xue. Xu Gang gives the film further complicating human dimensions as Xu Gang the impostor monk, who seems to feel a need to live up to the role he has fraudulently assumed.

“Free and Easy” is a vermouth-dry comedy that casts a cynical, bloodshot eye on contemporary Chinese society. The cops are the worst, but there is no shortage of grifters looking to pull a fast one.

Although it is a bit slower than you might expect, “Free and Easy” is still smart and archly funny.

Recommended for fans of con artist movies and Chinese cinema, “Free and Easy” screens again Jan. 22 in Salt Lake and Jan. 23, Jan. 26, and Jan. 27 in Park City, as part of this year’s Sundance Festival.