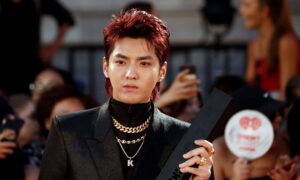 Nobel Prize Laureate Albert Camus is associated with existentialism, but he was really a determined foe of all totalitarian “isms.” He is also closely linked to his Algerian birthplace, with good reason. In addition to his celebrated novels “The Plague,” “The Stranger,” and the posthumously published but still quite good “The First Man,” Camus’s most anthologized short story, “The Guest,” is also set in Algeria.

Screenwriter-director David Oelhoffen thoughtfully but not entirely faithfully adapts Camus’s story as “Far From Men,” which opens this May 1 in New York, following its U.S. premiere at the 2015 Tribeca Film Festival.

Daru is a former military officer trying to make amends for his mysterious past by serving as a school teacher in a remote village. The meditative life seems to suit him, but it will be rudely interrupted by Balducci, the gendarme.

Whether he wants to or not, Daru has been tasked with escorting Balducci’s Algerian prisoner to the nearest French outpost in Tinguit, where he will likely be executed.

That night, Daru makes it clear to the man named Mohamed that he is welcome to escape at any time. However, the admitted murderer seems perversely intent on facing French justice. He does indeed have his reasons, (which constitute some unusually smart writing on Oelhoffen’s part).

Unfortunately, Mohamed’s family did not have the blood money to buy peace after he justifiably killed his cousin. As a result, Daru will find himself in the middle of an intra-family feud, as well as increasingly violent uprising led by many of his former Algerian army colleagues.

Fortunately, Daru is a crack shot with a rifle, because he will have to shoot his way out of a lot of trouble.

After playing the Gloomy Gus in self-consciously arty films like “Jauja“ and “Everybody has a Plan,” Viggo Mortensen finally finds the right vehicle for his simmering tough guy intensity. It also further burnishes his polyglot chops, this time showcasing him in French.

Reda Ketab’s performance is almost too impassive as Mohamed, but it still sort of works for a pseudo western, in the moody Anthony Mann tradition.

Frankly, “Far from Men” is exactly the kind of film the pretentious “Jauja” should have been, but so wasn’t. It critically engages with a lot of hot button issues, including colonialism and tribalism, but never at the expense of its lean and mean narrative.

Visually striking and tightly disciplined, “Far From Men” is recommended for fans of Mortensen and historical drama at the Cinema Village, following hard on the heels of its well-received screenings at this year’s Tribeca Film Festival.