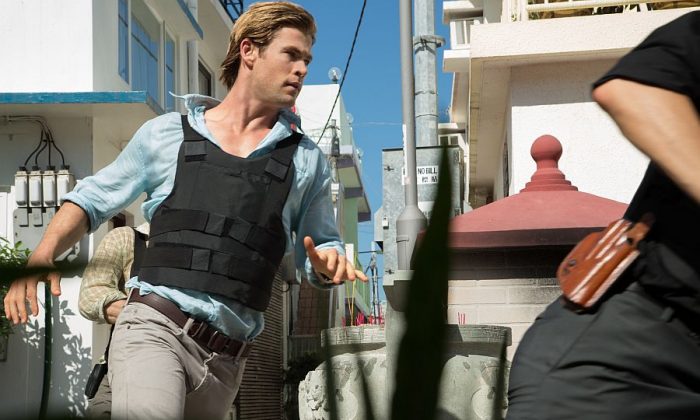 A hacking movie where the Chinese are the victims? That’s ironic, given the outrageous extent of Chinese hacktivity into American interests that’s recently come to light.

Anyway, starring big, blond thunder-god Thor-portrayer Chris Hemsworth as a hacker, the fairly fun cyberthriller “Blackhat” should have starred Matt Damon instead. It should have been a real Jason Bourne flick. Instead, it’s sort of a poor man’s version, so while watching, try not to think too hard about that, or the whole thing will turn mildly ridiculous.

What’s a blackhat? An unethical hacker. So basically, in “Blackhat,” it takes a blackhat to catch a blackhat.

This whole visual amperage and voltage journey turns out to be a computer-hackery ride, resulting in us witnessing how someone just turned off the big reactor pumps. Leading to cooling-system failure—boom! Reactor breach!

A blackhat blew up a reactor, and now the authorities want to know if it’s a political statement. What’s the motive? There’s no extortion. But wait—now suddenly someone’s tinkering with the stock market! There’s been a run-up in soy futures!

He was roommates with a guy named Nicholas Hathaway (Chris Hemsworth) at MIT, where Hathaway was lead architect on the code that the reactor-blowing blackhat’s been using. Hathaway invented it as a gag at school. Better go find this Hathaway.

But Hathaway’s hanging out in jail—he’s been a bad blackhat himself. You can’t keep a good blackhat down, and even in the slammer, he’s been adding money to various friends’ bank accounts from a smuggled cellphone.

Soon he’s sprung, with an electronic ankle bracelet and a U.S. Marshal breathing down his neck.

There’s a proliferation of computer techie-talk: “The malware took over!” “There’s a RAT!” (Remote Access Tool). “A blackhat opened up a back door!”

This section needed subtitles. Maybe 70 percent of the movie needs IT-wonk subtitles. What does the above mean? Well … it’s kinda hard to say. But if you see the movie, you can pretty much surf all the wonk-ness and arrive at a general understanding, regardless.

Hathaway and Chen have a reunion bro hug, and Chen’s brought his equally wonky sister Chen Lien. Since she’s played by Tang Wei, she’s much better looking than your stereotypical computer geek, which of course leads to scenes where Hathaway takes off his shirt, revealing for audiences everywhere the still-pretty-ripped Thor-body.

The cyberdetective crew now globetrots from Los Angeles to Hong Kong to Jakarta, hacking and cracking everything from a storeroom computer in a Korean restaurant to the top-secret NSA “Black Widow” program which forensically recreates destroyed data.

Aussie Hemsworth has been working hard on his American accent, but sometimes he has to concentrate so hard on it that the actual acting vanishes.

The Chinese regime is made to look very good here, having very mature, benign, but manly and decisive officials, very much trying to assist the U.S. with the blackhat dilemma. (After all, it’s their nuclear plant that got hacked.) This portrayal flies in the face of all evidence regarding China’s foreign policy agenda since Chairman Mao.

As mentioned, “Blackhat” has got a lot of the “Bourne” milieu about it. However, while there’s a lot of spy movie-type buying of supplies in pharmacies and hardware stores, and turning them into jerry-rigged weaponry a la “Taxi Driver,” the questions continually intrude: Did this MIT computer major learn all this seasoned spy and assassin tradecraft while sitting in a prison cell for four years?

How do they know the city of Jakarta so well? Nobody’s seen the blackhat they’re after—how’d they just identify him by looking around with some binoculars? And where’d they get such fancy binoculars in the first place?

Want some more? Where’d that sexy, form-fitted spotless white dress come from? They didn’t have time to go shopping at Bergdorf’s while on the chase. Where’d he acquire crack-shot pistol skills? How’d he learned to wrap a towel around his neck in a manner that, should someone stab him in the neck, he’s perfectly safe?

More? Where’d they get the awesome fake passports—lickety-split—and how’d they know how to find a safe house?

So all in all, as mentioned, take “Blackhat” as James Bond lite. It’s actually a fairly fun, tension-filled ride, but try not to think too hard about the technicalities.