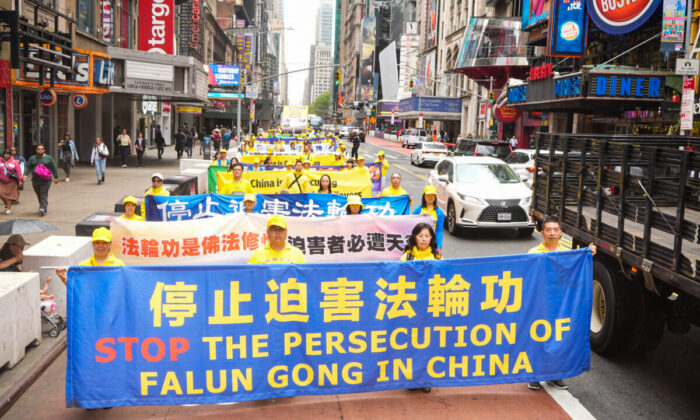 Falun Gong practitioners take part in a parade marking the 30th anniversary of the spiritual discipline's introduction to the public, in New York on May 13, 2022. (Larry Dye/The Epoch Times)
China Human Rights

One way the Chinese regime has maintained control over the COVID-19 narrative is by imprisoning more people who practice Falun Gong, a nonprofit director told a religious freedom summit on June 30.

China’s ruling Chinese Communist Party (CCP) declared war on China’s independent journalists, doctors, and citizen journalists during the pandemic, including Chinese who practice Falun Gong due to the increased risk they pose to the regime for whistleblowing.

Levi Browde, executive director of New York-based nonprofit organization Falun Dafa Information Center, explained during the panel that the CCP chose to escalate its persecution against Falun Gong because of the sheer size of the spiritual group—tens of millions of practitioners in China—that is already subject to the Chinese regime’s methods of information control and disinformation.

“That is why during the pandemic, Falun Gong incarcerations actually went up, because Falun Gong is no longer just a persecuted minority. It’s also a whistleblower,” Browde said.

He added: “And they [Beijing] know if they’re hiding something about the virus in Wuhan, or other places, Falun Gong is the first one they need to keep quiet, because they’re the ones who are going to expose the news about what the CCP is doing. And that’s exactly what happened.”

Persecution of Those Who Value Truth

There were 3,582 cases of harassment in 2019, but the number of cases jumped to 9,159 in 2020 before climbing to 9,332 in 2021, according to the Falun Dafa Information Center’s new biannual report released in May, titled: “Pandemic, Persecution and Pushback: Trends and Analysis from the Suppression of Falun Gong in China and Beyond.”

The number of practitioners killed because of their faith also matches the alarming trend. According to the report, there were 180 reported deaths in 2021—almost double the 98 known deaths in 2019. For the first three months of this year, there are already 21 confirmed deaths.

Falun Gong, also known as Falun Dafa, is a spiritual discipline that teaches its practitioners to live by the universal tenets of truthfulness, compassion, and tolerance. It was widely popular in China in the 1990s, with about 70 to 100 million practitioners, according to official estimates. In 1999, the CCP perceived the popular discipline as a threat to its rule and launched a nationwide persecution targeting the practice and its adherents.

Millions have been detained inside prisons, labor camps, and other facilities, with hundreds of thousands tortured while incarcerated, according to the information center. Additionally, there are over 4,700 documented deaths as a result of persecution, though experts say the true figure is likely much higher.

One of the whistleblowers identified is Fang Bin, a self-described citizen journalist, who exposed the severity of the outbreaks in Wuhan during the onset of the pandemic after he successfully filmed dead bodies at overcrowded hospitals in the city.

Days after his footage was made available online, Fang was detained by police. His current whereabouts are unknown, but he was reportedly being held at the Jiang’an Detention Center in Wuhan in November 2021.

Prior to the pandemic, Fang was once detained for over four years and “egregiously tortured” for practicing Falun Gong, according to the report.

The report also named whistleblower Xu Na, one of 11 Falun Gong practitioners indicted in April 2021 for providing information relating to the pandemic in China’s capital Beijing to the Chinese-language edition of The Epoch Times. Xu was sentenced to eight years in prison in January.

Allegations of forced organ harvesting from Falun Gong prisoners of conscience first emerged in 2006. Now, more than 15 years later, China is still murdering practitioners for their organs, according to Browde.

One of the participants on the panel was Han Yu, a Falun Gong practitioner, who shared how she suspected her father, Han Junqing, was a victim of China’s criminal organ harvesting scheme, who passed away in 2004 while being held at a detention center in Beijing. At that time, Han was still in China but she eventually moved to the United States in 2018.

Yu said police told her that her father died of a heart attack. But she suspects that determination of the cause of death based on how healthy her father was prior to his detention. Moreover, Yu said the fact that it took more than a month for the police to allow the family to see her father’s body aroused her suspicion.

Under the close watch of police officers, Yu and her family finally got to see the elder Han’s body. But they were in shock at what they saw.

“My father was laying there with green and the purple bruises all over [his body],” Han said. “What struck me the most were the thick stitches on his throat area.”

The stitches extended from the throat area to his abdomen, according to Han. She said her family then pressed his abdomen and found that it was filled with “hard ice.”

“My uncle was furious and confronted the police about what they had done to my father. The police just said that this was due to an autopsy. But no one in my family had consented to an autopsy, and the police also refused to release the autopsy report,” Han said.

Forced organ harvesting is one of the most egregious human rights abuses taking place today in China, and it targets minority religious communities. At #IRFSummit2022, we heard from Yu Han, whose father was a victim of forced organ harvesting. This is her chilling story. pic.twitter.com/DiuiaBPjEE

She said it hurts every time she shares her father’s story but she must continue doing so.

“I don’t want my father’s death to be in vain when we can stop forced organ harvesting in China,” Han told the summit.

In 2019, an independent panel, called the China Tribunal, found that such practice was happening “on a significant scale” in China. It concluded that such actions amounted to crimes against humanity, with Falun Gong practitioners being the main source of organs.

“We encourage the State Department to consider to designate the persecution of Falun Gong as a crime against humanity and or a genocide,” Liu said.