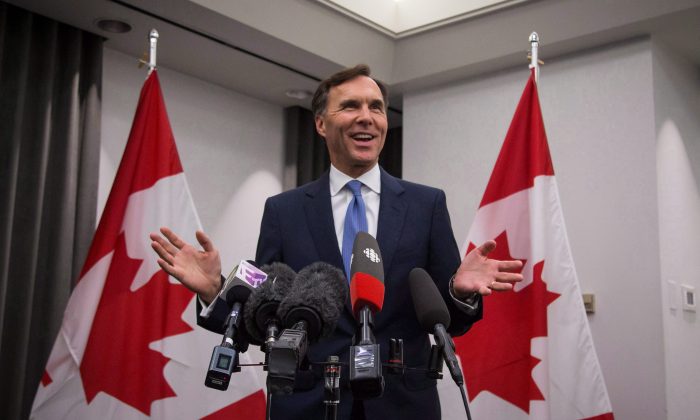 Minister of Finance Bill Morneau holds a press conference in Vancouver on Sept. 5, 2017. The trip to B.C. is part of a cross-Canada “listening tour” concerning proposed tax changes that will affect small business. (The Canadian Press/Ben Nelms)
Business & Markets

Summer vacations are over and tech entrepreneurs along with the small business community are up in arms over the government’s proposed tax changes that they say threaten Canada’s economic prosperity.

Tech entrepreneurs have been praising the government’s efforts to support innovation, but proposals to crack down on perceived tax loopholes and abuse of private corporations are creating a firestorm.

The Liberals want to tax the rich to help the middle class, but sentiment overwhelmingly believes they are going about it the wrong way. Many are saying that those who bear risks to create and grow businesses will be disincentivized to do so. The implications are profound.

Equal and fair mean two different things when it comes to taxation. The government wants equal, while the business community wants fair.

Other underlying issues are the opposing perceptions of the wealthy in Canada amid an ever-changing workforce of more small businesses and entrepreneurship.

Jack Mintz, Canada’s foremost tax authority and president’s fellow at the University of Calgary’s School of Public Policy, in a Financial Post column called the proposals “huge upheavals to our existing small-business tax system.” He also criticized the proposed move for not providing for any grandfathering of the existing system, which has existed for 45 years.

“If we are to encourage growth with an internationally competitive regime for young entrepreneurs, these proposals require much more than a few tweaks to minimize their harm,” wrote Mintz.

The three proposals concern spreading income across family members, taxing passive income within a corporation, and converting income into capital gains. The latter two are arguably the bigger issues for tech entrepreneurs.

Corporate business income is generally taxed at a lower rate than personal income. This is meant to allow businesses to invest more in their operations. This income—passive income—is perhaps the biggest sticking point in the proposals.

The government is thinking about taxing passive income of private corporations at the highest personal tax rate, which, according to Mintz, could be at over 70 percent.

In a letter to the government, Peter MacIntosh, partner at accounting firm White Kennedy LLP in B.C., takes issue with the government’s desire to equalize the business owner and the salaried employee.

The business owner, unlike a public corporation, bears all the risk of a business without company-sponsored pension and benefit plans (health care, dental, disability). In addition, business owners have to handle a number of peripheral functions such as payroll and human resources while producing and selling a product or service.

“If you ask me if business owners should have some form of upside for their efforts, I emphatically say ‘yes,'” MacIntosh wrote in a Linkedin post. “This only makes sense because that same business owner is left holding the bag if the business does not survive.”

The proposed harsher treatment for passive income could have far-reaching impacts on funding for startups. Today’s successful entrepreneur generally wants to invest in other startups—to “pay it forward”—a recycling of success or wealth within the ecosystem.

The perception of the wealthy entrepreneur appears to be entirely different for large segments of the Canadian population including the government as compared to the tech community.

The entrepreneurial mentality from Silicon Valley, as tech entrepreneur and angel investor Daniel Debow once put it, is to compete on which hot startup you invest in. It’s not about diversifying into real estate or bank stocks.

Debow said he knows some wealthy tech entrepreneurs who lie low because they don’t want the tax man coming after them or being vilified in the press.

Harley Finkelstein, Shopify’s COO, said at an event at the company’s Ottawa headquarters in May that because of the current capital gains tax system, he was able to invest in three companies instead of two. “One more company got funded because of our tax system,” he said.

Under the feds’ proposal, should an investor wish to transfer a business to his or her kids, the gain on the sale would be taxed as an ineligible dividend—up to 45 percent depending on the province—instead of a capital gain where only half the amount is taxed.

He says businesses will be driven to essentially circumvent the rules resulting in more underground activity and less revenue for the government. The highly mobile tech community will look for more friendly business environments abroad.

“Small business owners are some of the hardest-working individuals because their business is so personal for them,” Lee wrote. “These proposals are so egregious and misdirected that they will significantly impair Canada economically.”

Small business is the engine of job creation in Canada. From 2005 to 2015, 88 percent of the 1.2 million jobs created were attributable to small business.

“These proposals, when factored in combination with the highest personal tax rates in the G7, will cost jobs,” Lee wrote.

The Canadian Federation of Independent Business, a small-business advocate, is gearing up for a fight and has a petition with more than 1,400 signatures as of Sept. 12.

Over half of the roughly 250 members of the Canadian Venture Capital and Private Equity Association also disapprove of the proposed tax changes, said its CEO Mike Woollatt in an interview with BNN. He agrees that under the proposals, the payoff for entrepreneurs taking risks is greatly reduced, as is the potential for recycling of investment gains within the tech ecosystem.

In addition, the government has been accused of trying to pull a fast one, as the timing couldn’t be much worse for such complex and far-reaching changes to be analyzed. The 75-day consultation period—ending Oct. 2—ran mostly during the slower summer vacation season.

“It’s a short time frame to do something that has such a big impact,” Woollatt told BNN.

While the outcry among business owners and entrepreneurs has been growing, the issue doesn’t seem to be resonating with most Canadians. According to an Insights West poll, 38 percent of Canadians support the feds’ proposed tax changes and just 17 percent oppose them. The rest are undecided.

Changes Had Been Coming

The Liberals were under pressure not to tax stock options prior to Budget 2016, and they didn’t. Nor did they in Budget 2017. Finance minister Bill Morneau got the message loud and clear during his round of pre-budget consultations.

The tech community warned that taxing stock options would impair its ability to attract and retain talent. Finkelstein said that without stock options, Shopify could not compete with the salaries offered by larger companies and that it would not be the poster child for Canadian tech success that it is today.

In the Conservatives’ last federal budget in 2015, small business emerged a big winner as then-finance minister Joe Oliver proposed cutting the small business tax rate from 11 percent to 9 percent. The Liberals, in 2016, proposed to defer tax cuts below 10.5 percent. They face years of deficits to carry out an ambitious infrastructure program and middle-class tax cuts. Taxing the wealthy is the obvious solution.

“Tax reform is something Canada needs, but this is a piecemeal and, thus, highly flawed approach,” wrote Mintz.

Morneau’s intentions are to tax the wealthy, but enough analysis has been done showing that the proposed changes will actually hurt the middle class and shake up the established framework for small businesses and entrepreneurs to thrive.