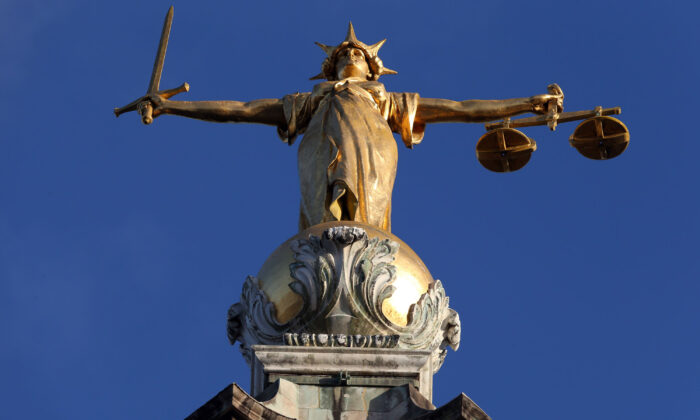 Undated photo showing Lady Justice statue on top of the Central Criminal Court of England and Wales, commonly referred to as the Old Bailey, in central London. (Jonathan Brady/PA)
UK

A London-based barrister has won a discrimination case against her own firm after she was placed under investigation for opposing what has been characterised as LGBT charity Stonewall’s “trans extremism.”

On Wednesday, the London Central Employment Tribunal found that, as a consequence of being a feminist who believes that a woman is defined by her sex, Allison Bailey was discriminated against and victimised by her colleagues.

“Organisations who put ‘Stonewall Law’ before Equality Law or seek to silence others from lawfully voicing their criticism of Stonewall may be acting unlawfully & will suffer the consequences, even if Stonewall does not,” Bailey wrote in a statement on Twitter.

A Garden Court Chambers spokesman told The Epoch Times that it is reviewing the judgment carefully with its legal team “with a view to appeal.”

A separate claim against Stonewall was not upheld. The court did not find that Stonewall had satisfied the legal test of “instructing, causing or influencing” the unlawful discrimination that it found Bailey suffered.

However, the tribunal did accept Bailey’s belief that “gender theory as proselytised by [Stonewall] is severely detrimental to women for numerous reasons” and is a “protected philosophical belief.”

The tribunal found that Bailey, a prominent gender-critical campaigner and founding member of LGB Alliance, which is in opposition to the policies of LGBT rights charity Stonewall on transgender issues, was discriminated against and victimised by her barristers’ chambers on the basis of her beliefs.

Bailey, who is black and a lesbian, claimed she was offered lower quality work after voicing opposition to the Stonewall Diversity Champion Scheme when it was announced at her chambers in December 2018.

Hundreds of private and public bodies are part of Stonewall’s Diversity Champions programme, which it says “promotes inclusivity in the workplace.” Some high-profile organisations have quit their diversity programme over impartiality and free speech concerns.

Founded in 1974, Garden Court Chambers is the number one ranked barristers’ chambers advising solicitors, members of the public, and organisations across the UK and around the world.

Bailey’s lawsuit centered on allegations that she was singled out “for attack by Stonewall and her chambers because of public statements on the subjects of sex, gender,” according to her website.

“Harry Potter” author JK Rowling wrote on Twitter that “Bailey is a heroine” to her and “innumerable other feminists for refusing to abandon her beliefs and principles in the fact of intimidation and discrimination.”

In a statement (pdf), Bailey said that “this is a vindication for all those who, like me, object to the erasure of biological sex, of women, and of same sex attraction as material realities. It represents judicial recognition of the abuse waged against us.”

“This case was never about money,” she added. “I did not win everything, but I won the most important thing: I have brought Stonewall’s methods into the public eye, and I have shown them for what they now are.”

In a statement, Stonewall said that it was “pleased that the Employment Tribunal has ruled in a decision” that it “has not been found to have instructed, caused or induced Garden Court Chambers to discriminate against Allison Bailey.”

“In particular we note that her primary claim (for loss of earnings on the grounds of victimisation) was dismissed, the Tribunal finding that “We could not conclude that it was shown that the fall in income was in any way influenced (let alone significantly influenced)” by Ms. Bailey’s complaint to colleagues about Garden Court becoming a Stonewall Diversity Champion or by her beliefs,” the spokesman said.

“The Tribunal found that it “could not conclude that Garden Court Chambers as a whole had a practice of treating gender critical beliefs as bigoted.” This confirms our stance. We have maintained throughout that our members, quite reasonably, hold differing views in the complex debate around trans and sex-based rights. Our primary aim throughout has always been to uphold our values and maintain a workplace that is inclusive and welcoming to all,” the spokesman added.

The case is the latest in high-profile claims in England.

In July, Maya Forstater, who lost out on a job for saying people cannot change their biological sex, won three claims in a fresh employment tribunal following an appeal.

She said that her case “matters for everyone who believes in the importance of truth and free speech.”

“We are all free to believe whatever we wish,” she said. “What we are not free to do is compel others to believe the same thing, to silence those who disagree with us or to force others to deny reality.”

“Human beings cannot change sex. It is not hateful to say that; in fact it is important in order to treat everyone fairly and safely. It shouldn’t take courage to say this and no-one should lose their job for doing so,” said Forstater.