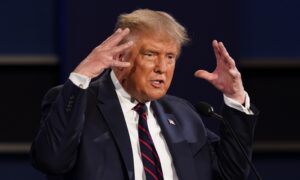 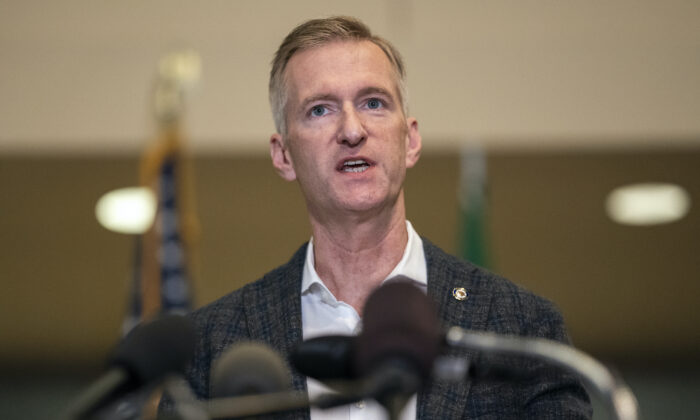 “Officers have been repeatedly assaulted with bottles, bats, sledgehammers, lasers, rocks, and other weapons of convenience. In addition, the public has seen repeated efforts by criminals to burn down public buildings.”

The deputization of Oregon state police officers, Multnomah County Sheriff’s deputies, and Portland police officers “underscores the importance of providing accountability and deterrence for these criminal acts,” they added. “Importantly, the federal deputation supports front line law enforcement officers and their families in a way they have not seen from City Hall.”

He was unsure why the deputation was only going to last until the end of the year because typical deputatizations are good for a year. The deputation means some of those arrested by the deputized law enforcement can be charged federally.

The deputization “has nothing to do with” Multnomah County District Attorney Mike Schmidt, who announced in August that some people arrested during protests would not be charged, the spokesman added.

In a statement over the weekend, Oregon State Police Superintendent Travis Hampton said that Portland officers have been responding to protests for months, sustaining injuries and “encountering unspeakable violence.”

“If I am to send them into harm’s way this weekend, on my authority, I’m going to ensure they have all the protections and authority of an OSP Trooper,” he said, adding: “I want violent individuals thinking about the enhanced penalties they may face if they harm a Portland Police Bureau Officer.”

State troopers were deputized when they were sent back to Portland weeks ago to deal with ongoing unrest, an Oregon State Police spokesman told The Epoch Times previously.

The county sheriff’s office said the deputizations would let federal prosecutors charge anyone accused of assaulting the new deputies.

The deputization took place shortly before a unified force of city, county, and state officers spread to portions of Portland to try to prevent violent acts from occurring during a planned rally held by the rightwing Proud Boys group and a counter-demonstration. They were largely successful.

The unified command was established by Gov. Kate Brown, a Democrat who declared an emergency ahead of the rally and counter-demonstration. The order was rescinded on Sunday morning.

Wheeler, who also serves as police commissioner, said Tuesday he was withdrawing consent for the deputization of police officers.

“Portland is fortunate the Governor and the Multnomah County Sheriff helped protect public safety this weekend, including by federally deputizing some Portland Police officers. Now that Governor Brown’s executive order has expired, I’ve asked the U.S. Attorney’s office to withdraw the designation,” he said in a statement.

“A key feature of the designation is that anyone who assaults a federally deputized official could be subject to federal charges. Fortunately, I am confident the Multnomah County District Attorney will continue to prosecute anyone who assaults or otherwise harms police officers or others. I take assaults against our officers seriously and so does the district attorney. We need to end the violence. Anyone engaging in illegal violent behavior, regardless of their beliefs or position, must be held accountable.”

Before the rejection by the federal officers of Wheeler’s request, Hampton said he supported keeping the deputization in place, pointing to the months of protests and rioting that’s taken place.

“Night after night, violent opportunists seek to provoke officers by marching on their places of work or private property associated with their agency. Officers are fatigued and injured, while the city suffers the injustice of hundreds of service calls going unanswered nightly,” he said in a statement.

“These officers, no matter their agency designation, [are] assigned to this work by their respective government leaders. As leaders, it is reckless and irresponsible of us to send our officers out each night to enforce the very laws and provisions we hold dear, without the tools to protect themselves and others. Having the accountability measures in place, like federal designation as a U.S. Marshal, is a responsible protection to the men and women that are serving our communities.”

Troopers wouldn’t serve Portland if they were needlessly endangered, he said, urging Williams, Oregon’s U.S. attorney, to “leave this measure of accountability in place for all agency crowd control units serving in Portland, so violent offenders that harm police officers will face the maximum consequence afforded by Oregon and Federal law.”