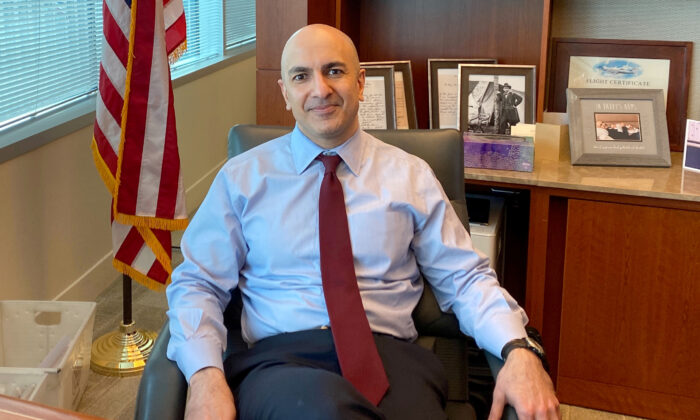 Minneapolis Federal Reserve Bank President Neel Kashkari poses during an interview with Reuters in his office at the bank's headquarters in Minneapolis on Jan. 10, 2020. (Ann Saphir/Reuters)
Economy

Minneapolis Federal Reserve Bank President Neel Kashkari on Tuesday said he expects more clarity on the economic outlook by the time the Fed ends its bond-buying program in mid-2022, and is keeping an “open mind” on the timing of any rate hikes to follow.

“I have not made any decisions about where my stance is on that,” Kashkari said at an event at University of Wisconsin-Eau Claire. Kashkari had previously said he believes the Fed likely ought to wait until 2024 before raising rates from their current near-zero level.

The forces that are currently keeping people out of the labor market and pushing up prices will likely prove to be temporary, and will fade as COVID-19 turns from being pandemic to being endemic, he said.

“We are getting these mixed signals out of the economy,” Kashkari said. Wages are rising, for instance, but the economy has an estimated 5 million to 7 million fewer jobs than would have been expected had there been no COVID-19 crisis.

“I’m optimistic, in the next three, six, nine months we will get a lot more information,” and clarity about the outlook for both inflation and the labor market, he said. In the next few quarters, he said, “if the labor force does not return, then that’s going to give me more concern that the high inflation readings that we’ve been seeing may be sustained, because that means that hey, we are already at or maybe we are close to our economy’s potential.”