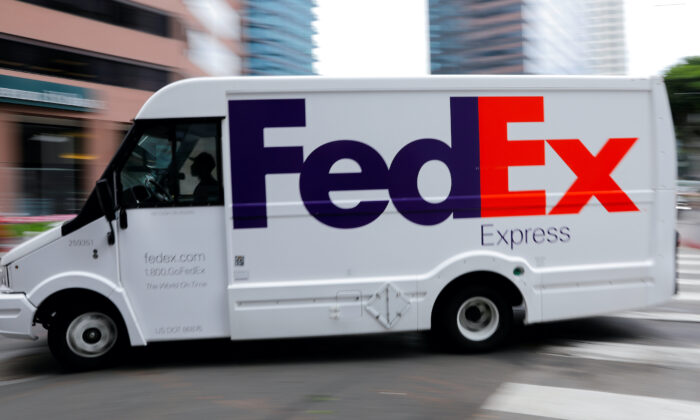 A FedEx truck is driven through downtown in Los Angeles, on July 22, 2019. (Mike Blake/Reuters)
Recession

FedEx CEO Raj Subramaniam has sounded the alarm on a global recession after the company revealed it will be closing multiple stores amid “significantly worsened” macroeconomic trends.

Subramaniam made the comment during an interview with CNBC’s Jim Cramer on Thursday, when asked if he believed the economy was heading toward a “worldwide recession.”

“I’m not an economist but I think so. But you know, these numbers, they don’t portend very well,” Subramaniam said.

When asked if the United States’ economy has been as bad as China’s in the last few weeks, Subramaniam said, “The U.S. consumer is definitely spending less but the U.S has been somewhat insulated because the U.S. dollar is the currency of choice for the world, and there’s some insulation there, but I do see the U.S as slowing down too.”

Still, surveys conducted by consulting firm Oliver Wyman cited by CNBC and published earlier in September found that 83 percent of more than 900 Chinese respondents said they felt the impact of rising inflation, up from 69 percent in November 2021.

Meanwhile, Oliver Wyman’s survey of more than 1,200 Americans in July found that 92 percent said they felt the impact of the rising cost of living on everyday life, up from 79 percent in November.

Despite inflation continuing to weigh heavily on American households, President Joe Biden has touted his $430 billion Inflation Reduction Act which was signed into law last month, and which aims to tackle climate change and bring down the cost of living.

On Sept. 13, Biden hosted lawmakers, CEOs, activists, and other guests at the White House to celebrate its passage where he dubbed it “the single most important legislation passed in this Congress to combat inflation and one of the most significant laws in our nation’s history.”

“With this law, the American people won and special interest lost,” Biden continued, adding that the act will lower the cost of prescription drugs, health insurance, and energy for “millions of families.”

Republicans have raised concern that the act will further worsen inflation and cost Americans more.

Elsewhere on Thursday, Subramaniam blamed “macroeconomic trends” that had “significantly worsened” both in the United States and internationally for the decline in global shipment volumes for FedEx’s disappointing revenue and earnings results for the fiscal first quarter, which saw the company withdraw its full-year guidance.

Such actions include reducing Sunday operations at a number of FedEx locations, deferring hiring of staff, and closing over 90 FedEx Office locations, among others.

Shares of FedEx fell 15 percent in after-hours trading on Thursday.