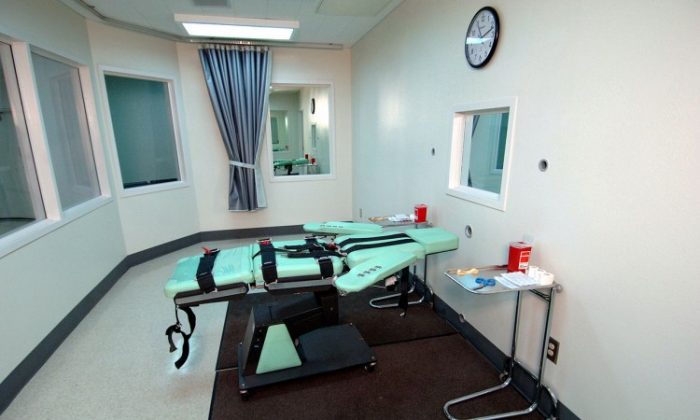 Sodium thiopental was once used in correctional facilities across the country, such as this room at San Quentin State Prison. The sedative was previously part of many states' lethal injection protocol, but a federal judge recently ruled that the FDA can no longer accept imports of the drug. (California Department of Corrections and Rehabilitation)
US

Lethal injection is the leading method of execution in the United States, but a sedative found in some capital punishment cocktails can only be found overseas. This week a federal court ruled to cut off the imported supply.

Sodium thiopental (better known by the trade name sodium pentothal) is a short-acting barbiturate used to induce anesthesia. Several states include thiopental in their lethal injection protocol, serving as an agent to render death penalty prisoners unconscious before other drugs take effect.

According to U.S. District Judge Richard Leon, because an imported drug may not function as intended, correctional facilities run the risk of subjecting prisoners to conscious pain, suffering, and cardiac arrest when using foreign thiopental.

In a ruling this week, Judge Leon ordered the U.S. Food and Drug Administration to round up state supplies of the imported sedative, and confiscate any shipments coming into the country.

The issue of foreign thiopental began in 2009, when Hospira Inc., the last U.S. pharmaceutical company to manufacture the drug, stopped production. Hospira had plans to move production to Italy until officials there realized what the drug might be used for.

While thiopental still sees some application outside of capital punishment, use among doctors has decreased with the introduction of newer medications, such as propofol—a drug, which several state correctional facilities, such as Ohio, Oklahoma, and Texas, now use in place of thiopental.

But when Hospira ended its production, other states weren’t willing to switch. Interested U.S. thiopental buyers found a market through Dream Pharma—a London wholesaler who bought the drug from an Austrian manufacturer.

As the foreign thiopental made its way into the United States, the sale hit a legal snag. Dream Pharma and its foreign manufacturer didn’t meet Federal Food, Drug, and Cosmetic Act (FDCA) requirements—as neither party had been appropriately scrutinized by the FDA. But when buyers complained, the FDA helped move the shipment through.

Last year, the FDA defended its release of the drug as an act of “enforcement discretion.” While the agency has long expressed concern for the risks involved with drugs purchased from foreign sources, FDA officials reasoned that use of thiopental for lethal injection fell outside the agency’s public health role, and deferred authority to state law enforcement.

In July 2011, a case brought against the FDA by death row inmates complained that the agency abused its discretion in allowing thiopental imports in violation to FDCA requirements. Judge Leon agreed.

Judge Leon has never been shy about squelching FDA intentions. He recently ruled against an agency plan that would have required explicit graphic warnings on cigarette packaging. While the FDA said the labels protected consumers from the dangers of smoking, Judge Leon decided that the move violated Big Tobacco’s freedom of speech.

Judge Leon didn’t buy the FDA’s argument in his thiopental decision, either. While the agency suggested there was no causal link between the threat of injury and the FDA’s failure to reject the unapproved drug, Judge Leon saw things differently.

“This departure from longstanding policy makes little sense in light of the fact that alternative barbiturates for use in lethal injection protocols exist,” wrote Judge Leon. “This appears to be nothing more than the FDA, once again, stubbornly clinging to every last ounce of its discretionary authority!”