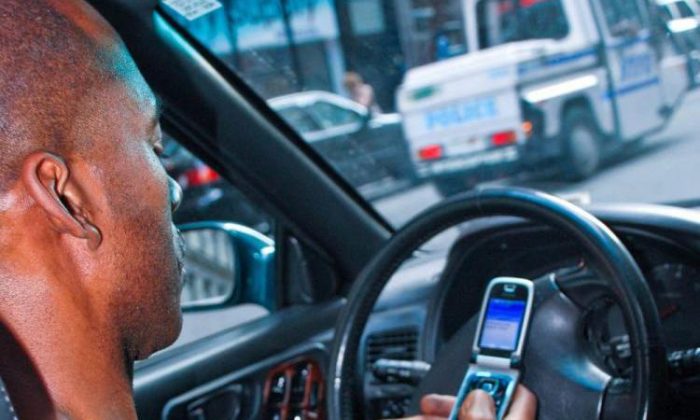 Texting while driving increases accident rate by 23 times, according to a recent study. (Helena Zhu/The Epoch Times)
US

With cell phones, navigation equipment, music, and even Web browsing, drivers enjoy more entertainment options than ever before—but officials want to bring the focus back to the road.

“Distracted driving is a dangerous and deadly habit,” said U.S. Transportation secretary Ray LaHood in a recent conference call with reporters. His announcement wasn’t about another cellphone law. Instead LaHood unveiled the first in a series of federal design recommendations calling for a more integrated vehicle control panel—one aimed at simplifying the growing number of devices competing for our attention.

The National Highway Traffic Safety Administration (NHTSA) says its first ever proposed guidelines are designed to both improve safety and give drivers the technology they’ve come to expect.

“We envision a new safety era that will revolve around safe vehicle designs and emerging technologies,” said NHTSA administrator David Strickland. “We expect crash-avoidance technologies to provide an opportunity to save lives and reduce injuries by preventing crashes from occurring in the first place.”

Strickland told reporters that he understands why car manufacturers would want to build vehicles with the convenience and connectivity features consumers demand, but he says the NHTSA design recommendations offer “real-world guidance” to develop a system that doesn’t disrupt a driver’s attention.

From sending a text to changing the radio dial, the NHTSA has for years been studying how different devices can affect driver performance. Researchers say that even when a driver’s focus shifts from the road to other activities for just a few seconds, vehicle safety is compromised. According to an agency report, 17 percent of all police-reported crashes in 2010 involved some type of driver distraction.

The NHTSA recommendations encourage automakers to reduce the complexity and time drivers spend on their electronic diversions (fumbling for knobs, pushing buttons, and reading displays) so that they can concentrate their focus on vehicle control. The guidelines apply to “communications, entertainment, information gathering, and navigation devices” that are not required to safely operate the vehicle. This includes text messaging and Web browsing, as well as any displays that confront the driver with more than 30 characters of text unrelated to his primary task.

Future phases of the NHTSA program will address devices such as smartphones, tablets, and navigation systems. Another set of guidelines is planned to encourage voice-activated controls. Officials say these guidelines can steer manufacturers toward less-distracting vehicle systems.

For an illustration of what the control panel of the future might look like, consider General Motors’ new Color Touch Radio with IntelliLink. Last week GM announced their onboard solution to driver distraction—a voice-controlled console that provides a smartphone-like layout of driver accessories, all designed to be used with two hands on the wheel as often as possible.

Toyota and Hyundai have previously designed systems to address driver distraction, and BMW is marketing its new 3 Series featuring a heads-up display—a technology that projects information directly onto a driver’s field of vision, preventing attention from wandering off the road for too long.

Strickland says that while several companies are already addressing distractions in their designs, others “have no strategy at all.”

Although researchers believe that integrated technology might improve driver concentration, it isn’t a perfect solution. Critics say that even with these integrated systems, extraneous devices may still contribute to distraction. Studies have shown that when drivers have intense cellphone conversations, for example, even hands-free devices can significantly compromise safety.

In a world where drivers are unwilling to part with their high-tech connectivity, experts say an integrated redesign can help. In a statement, the AAA auto club said that while they believe the best strategy involves a comprehensive approach combining good laws, visible enforcement, and effective public education campaigns, it considers “the NTSB recommendation to be an important step in the national dialogue about the dangers of distracted driving.”

The NHTSA is giving the public 60 days to comment on the proposed recommendations. Final guidelines will be issued following agency review of public feedback.