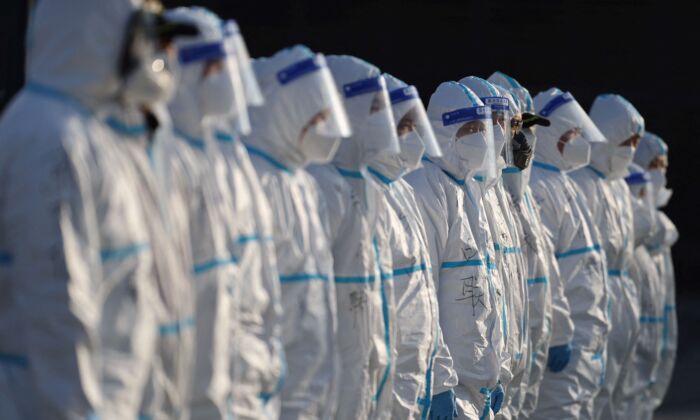 Three weeks from the opening of the Beijing Winter Olympics, as the Chinese city of Xi’an was under total lockdown over a COVID outbreak, the top official in the province ordered authorities to double down on harsh containment measures—fearing that a spillover could affect the Games and harm the communist regime’s image.

That’s according to an internal speech given on Dec. 24 by the governor of the north-central province of Shaanxi, whose capital is Xi’an, a transcript (pdf) of which was obtained by The Epoch Times.

Noting the opening of the Beijing Games in early February, the official, Zhao Yide, said that a spread of the outbreak would “create chaos to the overall situation of the country and smear the national image.”

Zhao, in a virtual speech given to the region’s health officials, ordered “the toughest measures” to be put in place in Xi’an to halt the transmission of the virus.

His speech came a day after the city’s 13 million residents were put into lockdown as authorities reported the country’s worst COVID-19 figures in 21 months. Such official figures, however, don’t likely reflect true infection rates, given the Chinese Communist Party’s practice of suppressing negative information to protect its image.

The governor’s 5,300-word speech focused on using “tough” and “strict” measures to “block the chain of transmission.” It only briefly mentioned the need to ensure citizens’ access to daily supplies, so as to ensure the “overall stability” of society. He didn’t mention the issue of medical care or the emotional well-being of the locked-down residents.

The city’s harsh measures, implemented under the regime’s “zero-COVID” policy, have since triggered an outpouring of public anger and despair, as residents used social media to voice their struggles in gaining access to food supplies and medical care.

“It’s been more than 20 days, and [local authorities] have sent food once—just once,” a netizen wrote in a Jan. 9 social media post, worrying about his friends who also were locked in their home.

As with all events that reflect unfavorably on the communist regime, China’s online censors have swooped in to suppress negative content.

The Xi’an Municipal Bureau of Agriculture and Rural Affairs, in another internal document (pdf) obtained by The Epoch Times, said on Dec. 28 that it would “strengthen the real-time monitoring of public opinion during the Winter Olympics and holiday seasons,” in a bid to “reduce the negative impact.”

On Jan. 5, some locals received an “important announcement” on WeChat, a popular Chinese messaging platform, warning them that their chat groups were being actively monitored, according to screenshots shared with Radio Free Asia. “Rumors” and outbreak-related videos were strictly banned from the chats, the announcement stated, adding that any spread of “negative news” would trigger an account suspension.

The internal documents show that the provincial government views the success of the Winter Olympics as the top political objective, China affairs commentator Li Linyi told the Chinese-language edition of The Epoch Times.

“When the Chinese Communist Party was pushing extreme pandemic prevention measures, it was thinking about the Party’s image rather than the lives of the people,” he said. “It’s anti-human, and social control exacted at the cost of trampling on the lives and dignity of the Chinese people.”

Xi’an residents have shared tales of despair and hardship resulting from the city’s strict control measures on social media since the start of the lockdown on Dec. 23.

A late-term pregnant woman miscarried outside a hospital on New Year’s Day after the hospital refused her entry over a negative COVID result that was invalid by a few hours. Other miscarriages occurring in similar circumstances and stories of seriously ill patients being denied care have been shared on social media, drawing public outcry.

As public anger swelled, Chinese Communist Party officials issued a rare public apology to the woman who miscarried. On Jan. 6, Chinese Vice Premier Sun Chunlan said she was “deeply ashamed” over the mistreatment, while Liu Shunzhi, the city’s health commission director, bowed in apology over its handling of the case. Zhao, who gave the earlier speech, also called on authorities to prioritize people’s lives and physical health.

However, the same day, the Chinese regime dismissed an official who criticized Xi’an authorities’ harsh lockdown measures in a social media post. He described publicly reported cases of residents taking extreme measures to escape the lockdown, including a 31-year-old who walked in the cold for eight days and nights to return to his hometown. The official’s post was designated as a “rumor” and removed from the internet.

While Xi’an authorities declared the outbreak under control on Jan. 5, a portion of the city’s residents is still under lockdown. Some residents recently told The Epoch Times that they’ve been sealed inside their homes as their food supply dwindles.