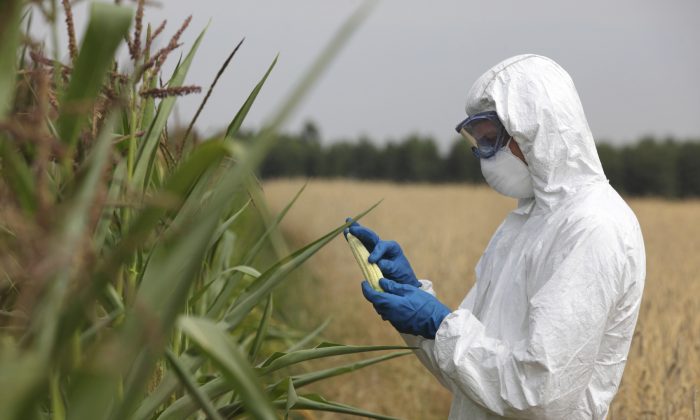 Technician examining corn in the field. (endopack/iStock)
Good to Know

The U.S. Food and Drug Administration (FDA) says that starting this year it will evaluate milk, corn, eggs, and soybeans for remnants of the world’s most widely used agricultural chemical: glyphosate.

Some food system reform advocate groups say the FDA’s decision shows a step in the right direction, while others say it won’t do much good.

Civil Eats, a news and commentary website devoted to the American food system, traced the inspiration for this measure to the Governmental Accountability Office (GAO), which called for federal food regulators to “strengthen pesticide residue monitoring programs and further disclose monitoring limitations.” A GAO report published in October 2014 questioned the FDA for failing to test food for several commonly used chemicals to determine if they meet the maximum allowable amount of a pesticide residue.

Glyphosate (perhaps best known as the active ingredient in Monsanto’s RoundUp) plays a fundamental role in American agriculture, and use has increased exponentially in the last decade. In a study published on February 2, 2016, in the journal Environmental Sciences Europe, researchers found that U.S. agricultural use of glyphosate grew from just over 27 million pounds in 1995, to 250 million pounds in 2014.

The U.S. Environmental Protection Agency (EPA) came to a similar conclusion over 30 years ago, but reversed its decision in 1991, just as bioengineered crops were first being planted in American fields.

The agricultural industry first started using glyphosate in 1974, but use was limited because the chemical could kill crops as well as weeds. However, with the advent of corn and soy crops genetically altered to resist glyphosate, farmers could apply the chemical throughout the growing season. Over time, as so called “superweeds” developed a resistance to glyphosate, farmers were forced to use more chemicals to keep them under control.

A report released on February 17, 2016 in the journal “Environmental Health” urges scientists and regulators to reconsider the health and environmental impact brought about by the ever escalating use of glyphosate. The team of scientists who issued the consensus statement wrote that “Since the late 1980s, only a few studies relevant to identifying and quantifying human health risks have been submitted to the U.S. EPA.” The report calls for “up-to-date science” to address current levels of exposure.

With so much glyphosate floating around these days, it’s not surprising to find evidence of it beyond the fields. A 2012 German study found glyphosate in all urine samples taken from people in Berlin (non-agricultural workers), at levels five to 20 times the limit for drinking water. Other studies have found traces of glyphosate in breast milk, and tampons fresh from the package.

The FDA says there are several reasons why the agency has not routinely looked for glyphosate in its pesticide residue monitoring regulatory program in the past. The reasons mentioned in a brief statement given to reporters states that previously available methods for detecting glyphosate “would have been very cost- and labor-intensive to implement in FDA field labs. Also, glyphosate levels, if present in genetically engineered corn and soybeans, are likely to be reduced by the processing done to those foods.”

However, the agency says it has now developed “streamlined methods” to test for glyphosate that are presumably more cost effective.

Consumer advocacy groups such as Moms Across America and U.S. Right to Know applaud the FDA’s announcement. In a statement, Gary Ruskin, co-director of U.S. Right to Know, called the FDA’s move “a good first step,” but recommended that the testing to be “thorough and widespread.”

“[The] USDA also should get on board,” Ruskin said.

Others are not convinced that the FDA’s new measure will prove all that enlightening. One such critic is attorney T. Matthew Phillips, who led a class action lawsuit  last year in California accusing Monsanto of false advertising because the Roundup label claims that the chemical targets an enzyme not found in people and pets. However, this enzyme is actually found people and pets.

“Anybody can easily prove this fact using only Wikipedia,” Phillips said.

According to Phillips, federal regulators will overlook where the bulk of glyphosate lies: in the food, not on it.

Phillips points to government literature pertaining to glyphosate residue that states that the EPA recognizes only “topical” residue and avoids mention of “systemic” residue. Yet even the diagram on a bottle of RoundUp shows a plant absorbing the chemical through its roots. The Epoch Times asked how the test would be performed, but the FDA statement gave no details.

In a statement to Civil Eats, Monsanto defended “glyphosate’s 40-year history of safe use” which “has been upheld by the U.S. EPA and regulators around the world following decades of study and review.”

“No data have ever indicated residue levels of more than a fraction of EPA’s very conservative Allowable Daily Intake or any level of concern. If FDA does move forward with additional testing in a scientifically rigorous manner, we are confident it will reaffirm the long-standing safety profile of this vital tool used safely and effectively by farmers, landowners and homeowners around the world.”