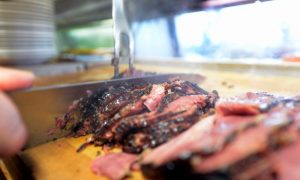 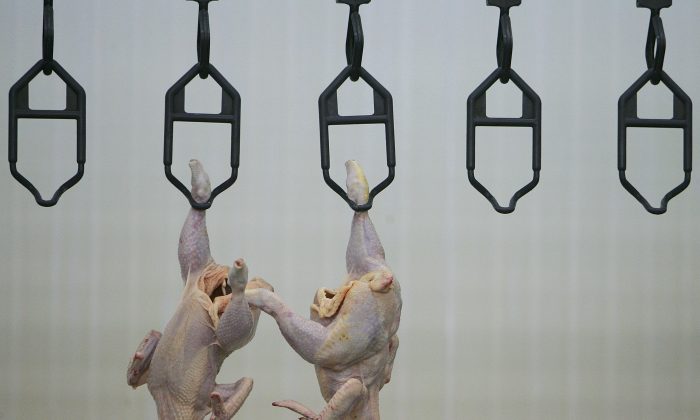 The United States is the largest producer of beef and poultry in the world, but meat-processing workers pay a heavy price to keep up the pace.

A coalition of civil rights groups sent a petition on Sept. 3 to the U.S. Occupational Safety and Health Administration (OSHA) and the U.S. Department of Agriculture (USDA) calling for new health and safety standards for meat processors. Groups urge regulators to mandate slower line speeds for an industry rife with injury and exploitation.

“The rush to process as many birds as possible using as few workers as possible leads to many serious injuries and illnesses and limits workers’ access to breaks, even short ones, to rest their aching muscles, seek medical treatment or even just to go to the bathroom,” said Tom Fritzsche, lawyer for the Southern Poverty Law Center (SPLC) in a conference call with reporters.

In 2005, the Government Accountability Office labeled meatpacking “one of the most dangerous industries in the United States,” and studies continue to support this claim.

SPLC’s 2013 report “Unsafe at These Speeds: Alabama’s Poultry Industry and its Disposable Workers,” found that nearly three-quarters of the over 300 poultry workers interviewed described suffering some type of significant work-related injury or illness. They experienced “debilitating pain in their hands, gnarled fingers, chemical burns, and respiratory problems. Many had the telltale signs of repetitive motion injuries, such as carpal tunnel syndrome, and other ailments that flourish in these plants.”

One of the workers featured on the conference call, Franco (42), worked in three different Alabama poultry plants for nearly 14 years. Speaking through an interpreter, he described grueling conditions where employees in pain were scrambling to keep up.

Quick and repetitive motions performed eight hours a day led to carpal tunnel syndrome, so Franco paid for injections and surgery, but treatment compromised the dexterity his hands once had. Later, he hurt his back carrying a heavy box of chicken carcasses.

“The company fired me because I wanted to rest my back and take time to seek medical attention,” he said.

Theresa Martinez, a former meatpacking worker from Nebraska shared a similar story. Once recognized as employee of the month, Martinez said she felt like a “replaceable machine” once she started to complain about pain in her right shoulder.

“The supervisor didn’t care about people, they care about production,” she said on the conference call.

According to Celeste Monforton, a lecturer at George Washington University, “peer reviewed evidence demonstrates the high incidence of injuries and disabilities from workers in these plants.”

On the conference call, Monforton said that injury, injustice, and intimidation plague these facilities.

“Work environment factors include low wages, job insecurity, isolation because they are working in rural community, a largely female workforce, not having the benefit of a labor union, being Hispanic or African-American, or perceived or real threats because of their immigration status,” she said.

The call for slowing line speeds comes just as regulators gear up for a production increase of more than 20 percent. For the last few years, USDA has been crafting a rule that would allow top speeds for poultry lines to go from 145 birds per minute (bpm) to 175 bpm and more.

The high-speed protocol known as the HACCP-Based Inspection Models Project or HIMP is designed to improve food safety but requires fewer government inspectors, according to the USDA. The plan is estimated to reduce production costs more than $256 million per year and save taxpayers more than $90 million for the next three years, all while preventing 5,200 foodborne illnesses annually.

Elisabeth Hagen, undersecretary for food safety at the USDA, told Politico on Sept. 4 that according to observations from the HIMP pilot program, increased line speed does not present any problems.

“People have raised concerns about worker safety—sort of that gut feeling that things are going to be moving faster so workers are at risk. We don’t have any data that shows that’s the case,” she said.

Further government data is on the way. When HIMP was proposed in 2012, USDA Secretary Tom Vilsack announced a study with the National Institute for Occupational Safety and Health (NIOSH) that would examine the effect faster line speeds have on employees.

However, USDA won’t be waiting around for the results. The NIOSH study will take three and a half years to complete—long after HIMP goes into effect at the 219 facilities estimated to implement the new protocol.