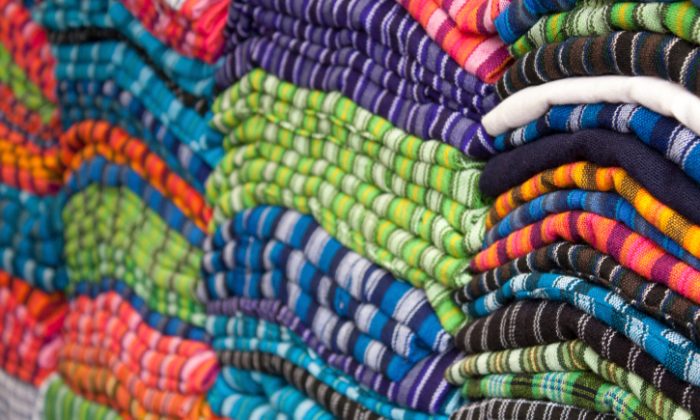 Fashion Designer With PhD in Physics: Trippy Prints Should Be the New Black, It’s Science

Dr. Tom Chalko subscribes to the controversial idea that the human body emits an energy that both reflects and affects a person’s mood. He says the vibrations of lightwaves off our clothing impact this energy. The colors we wear would thus affect how we feel and affect the “vibes” we give others.

Dr. Chalko calls this phenomenon of emitting energy bio-resonance. Photographs taken using a special method seem to show a glow around people and objects—this glow is bio-resonance, says Dr. Chalko. In producing these photos, a person’s finger is often placed on a photographic plate then surrounded by a high-frequency electric impulse. As a result, an image is produced on the plate that shows a glow around the finger.

These photographs and others produced using similar methods provide the basis for Dr. Chalko’s studies. He has trained in laser holography, optics, and engineering sciences, and he has spent several years studying bio-resonance.

Finding a practical application for his findings, Dr. Chalko established his own clothing line.

His website explains: “In bio-resonant garments, vibrations of light (colors) are scientifically tuned and combined in an effort to resonate with particular electro-photonic bio-emissions of the human body. This seems to cause considerable amplification of our bio-energy.”

He calls it “a continuous color acupuncture.”

On the other hand, black is a downer. Dr. Chalko’s website explains: “wearing black creates weakening and fragmenting of our electro-photonic bio-energy field.” Dr. Chalko says: “Studies of ancient civilisations show that traditions of making and wearing extremely colourful garments played an extremely important part in their life. What seems just a tradition could have in the ancient past an important reason, related to the very basis of human existence.”

Bio-electrographic photos taken show the different amount of glow around the same person’s finger when that person is wearing black clothing versus Dr. Tom Chalko’s bioresonant clothing. (Courtesy of Bioresonant)

His theories have not been adapted into mainstream science. The more conventional science of color psychology has, however, also started to explore the effects of wearing colorful clothing. For example, psychologist Brian P. Meier of Gettysburg College in Pennsylvania and a team of researchers studied how people react differently to the same person wearing different colors.

Meier tested whether people were drawn to or mildly repulsed by the same person depending on whether he was wearing red or blue. He conducted the same study with a female subject. Furthermore, he created different contexts. Meier and his team found that people were drawn more to the color blue in terms of romantic appeal and drawn more to red in terms of assessing intelligence.

The study states: “Our results reveal that a subtle manipulation of color can have important effects on basic approach and avoidance behavior and, critically, highlight the importance of attending to context in investigations of color and psychological functioning.”