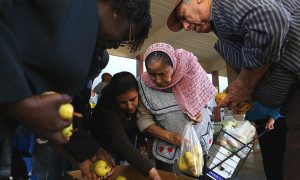 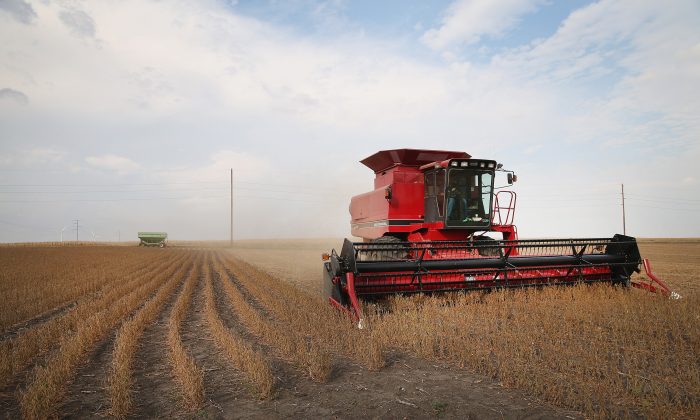 Minnesota soybeans harvested on Oct. 2, 2013. Crop insurance is designed to protect farmers and ranchers from unpredictable weather and market forces, but reformers want more limits on the subsidies. (Scott Olson/Getty Images)
US

As Congress wrestles over a new farm bill, one major sticking point is subsidy reform.

EWG painted its high earner welfare picture by matching the September 2013 Forbes 400 list, with data on subsidy spending by the U.S. Department of Agriculture (USDA). Altogether, the $11.3 million in payments these billionaires collected only represents a tiny fraction of payouts over the past 20 years, but it portrays the general imbalance in subsidy allocation.

The farm bill originated during the Great Depression. It was meant to give struggling farmers some financial stability. Since 1995, however, 75 percent of subsidies have gone to less than 4 percent of America’s wealthiest farmers.

“Our broken policies propped up the richest few at the expense of taxpayers and struggling families—that’s a backward vision that no one should be proud of,” wrote report author and EWG policy associate Alex Rindler.

One subsidy lawmakers want to revise is crop insurance—a program designed to protect farmers and ranchers from volatile weather and market forces. Unlike traditional farm subsidies, however, crop insurance is not subject to means testing, payment limits, and conservation requirements, but reformers think it should be.

The USDA reported $14 billion was spent in crop insurance last year alone, and the Congressional Budget Office calculated that it will cost taxpayers $90 billion over the next decade.

Little to No Oversight

“Members of Congress are currently negotiating a new five-year farm bill that could cut billions from nutrition and anti-hunger programs, while continuing—or even increasing—these crop insurance subsidies that have little to no oversight,” stated the letter.

The extent of reform depends on how much lawmakers can negotiate, and the latest farm bill talks still show no room for compromise. The Republican-led House version of the farm bill does little to address subsidy payments, while the Democrat-led Senate bill ends direct payments, limits payments, and cuts subsidies for people not actively engaged in farming.

The line on subsidies isn’t exactly partisan. When the House dropped food stamps from their farm bill this summer to concentrate on the farm portion, The Heritage Foundation blasted lawmakers for wasting their “golden opportunity” to craft real reform.

According to the conservative think tank, “the House has gone even further to the left than the Senate bill. It would spend more money than Obama on the largest farm program, crop insurance.”

House leaders, however, remain firm—make more cuts to food stamps, and leave crop insurance alone. In his opening remarks to the latest round of farm bill talks, House Agriculture Committee Chairman Frank Lucas said he was “not in favor of applying layers of regulatory bureaucracy” to the program.

“For those of us who enjoy eating, it is a sound investment to ensure a stable and affordable food supply,” Lucas said.