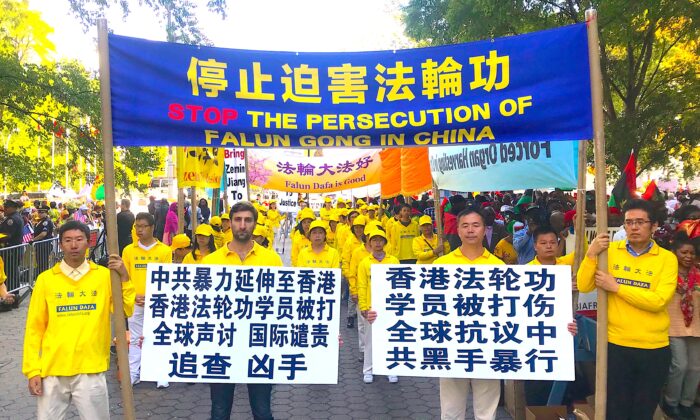 NEW YORK—Shock over a bloody mob attack in Hong Kong of a Falun Gong practitioner has rippled to New York City as nations gathered for the 74th session of the United Nations General Assembly.

“My heart aches a great deal, I really want to tell the world’s people and to stop this persecution, so that practitioners will no longer experience any bloody incidents like this,” New York-based Falun Gong practitioner Chen Biying told The Epoch Times.

Falun Gong, an ancient Buddha-school spiritual practice that came to the public in 1992, involves slow-moving exercises and moral teachings, including three core principles of truthfulness, compassion, and forbearance. Deeming it a challenge to its authority, the anti-theist communist regime in China began a nationwide campaign to wipe out the practice in 1999. The death toll due to beatings, slave labor, and other forms of torture remains unknown due to the difficulty of getting such sensitive information through China’s Great Firewall.

“Because of the persecution in the mainland, we had no choice but to escape to here,” said Chen, who originally came from China. She said she had tears in her eyes when she saw the footage of the aftermath of the Hong Kong attack.

On Sept. 24, Falun Gong practitioner Liao Qiulan, who organizes local Falun Gong-related events, was attacked by two strangers on Sept. 24 while walking in the Lai Chi Kok neighborhood in Hong Kong. She was applying for a police permit for a demonstration on Oct. 1, marking the 70th anniversary of communist rule in China. The annual event was meant to shed light on regime’s ongoing persecution of the spiritual group.

The two attackers, whose faces were covered with black cloth, had already hit Liao with one-foot-long black metal objects by the time her two companions rushed over to defend her with their hand bags. The men then rushed into a waiting white car and fled the scene. Liao’s friends suspect that the assault was planned, and that the attackers had targeted Liao.

“They hit me with all their might and they just keep hitting,” Liao later told NTD Television. “One man hit my hands and another person, my head and feet.”

Blood had splashed all over Liao’s face, soaked through the chest area of her shirt, before forming a small pool on the ground.

Chen said that practitioners of Falun Gong frequently experience assault from communist front groups such as the Youth Care Association during public events, although an attack of this violence and bloodshed has previously not been seen in Hong Kong.

“Our practitioners braved through a lot of hardships out there … and they are not doing it for themselves,” Chen said, referring to some booths that local practitioners have set up in Hong Kong, where they meditate and hand out some flyers to mainland Chinese tourists to raise awareness about what’s happening to their faith in China.

Another practitioner, Michael Yu, said that the assault on Liao was “not an isolated incident,” noting the rising pattern of violent attacks during the recent anti-extradition protests in Hong Kong. A number of pro-democracy activists, journalists, and lawmakers have experienced mob attacks in the past several months. Among them were convenor of Civil Human Rights Front Jimmy Sham who has organized several mass rallies, an Apple Daily reporter known for her coverage of the pro-democracy movement, and Democratic Party lawmaker Roy Kwong, who has also been supportive of the protests.

“Hong Kong is a free society and highly autonomous, something like this should never happen,” he added.

A New York Falun Gong spokesperson condemned the attack on Liao, saying that the CCP was “tramping on Hong Kong citizens’ freedom and fundamental human rights,” according to a statement obtained by The Epoch Times. She suggested that the Chinese regime is trying to “eliminate any different voices” as it prepares for the Oct. 1 celebration.

Chen said that the violence will not scare Falun Gong practitioners from speaking out about the human rights violations perpetrated by the Chinese regime.

“We know that justice will prevail over the evil,” she said.