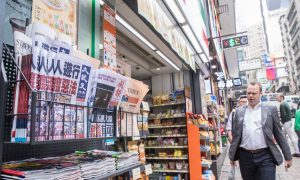 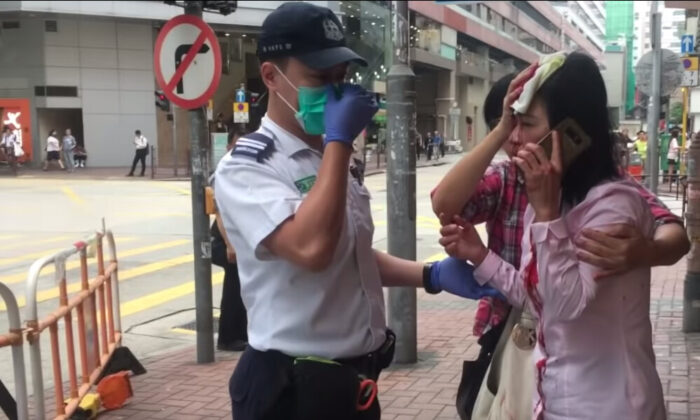 Liao Qiulan speaks with a police officer after being attacked by a man with a rod in Hong Kong on Sept. 24, 2019. (The Epoch Times)
HK Current Affairs

Two separate mob attacks in Hong Kong, on a local lawmaker and on an adherent of a spiritual practice persecuted in mainland China, have drawn suspicion that pro-Beijing forces are trying to silence dissident views.

On the morning of Sept. 24, Democratic Party lawmaker Roy Kwong got into his car at a parking lot near his home in the Tin Shui Wai neighborhood. He was suddenly dragged out of the vehicle by a masked man. Four others then cornered him, and three began kicking and punching him, while the other stood nearby and recorded the attack, according to Kwong’s recollection as reported by Hong Kong media. The attack lasted less than a minute.

He sustained injuries to his face, neck, hands, and feet and was sent to a nearby hospital by passersby.

Kwong frequently attends anti-government protests to help mediate between demonstrators and police during clashes. He said he suspects the attack was meant to intimidate him for supporting protesters, and that the attackers could be from mainland China.

The protests began three months ago in opposition to an extradition bill that many felt would erode Hong Kong’s autonomy. The territory reverted from British to Chinese rule in 1997, under the express guarantee that its freedoms, not afforded in the mainland, would be preserved.

“Hongkongers won’t be scared off,” Kwong told reporters at the hospital.

“As a lawmaker for Hong Kong people, it’s only our duty to protect Hongkongers. If we are attacked for protecting Hongkongers, students, and citizens, then it would be an international scandal.”

At least 24 Democratic Party lawmakers have since signed a joint statement condemning the attack. In a statement, a spokesperson for the Hong Kong government also condemned the attack and said local police would investigate the incident.

Around 4 p.m. that same afternoon, Liao Qiulan, a practitioner of the spiritual discipline Falun Gong, was also attacked while walking in the Lai Chi Kok neighborhood.

Liao’s friend, surnamed Lau, was accompanying her at the time and recounted the incident to The Epoch Times:

“The three of us were walking along Cheung Shun Street. … Liao was walking behind us [Lau and another friend, Ms. Ho]. Then, suddenly, two unknown people walked toward us, holding a one-foot-long black metal object similar to a baton.

“Intrigued, I watched them walk past me and Ms. Ho, and go straight toward Liao Qiulan.”

Lau said the two men, whose faces were covered in black cloth, hit Liao with the metal object several times as the three women tried to fend off the attackers with their bags. The men then fled into a nearby white vehicle and sped away.

Liao was bleeding profusely from her head. The other women held a handkerchief to her forehead to try to stop the bleeding, but the blood soaked through it.

Liao said that they had just come out of an appointment with the police at the Cheung Sha Wan police station to apply for a demonstration on Oct. 1, the 70th anniversary of the Chinese Communist Party’s takeover of China.

Practitioners of Falun Gong hold an annual march on that date to shed light on the Chinese regime’s ongoing persecution of adherents in mainland China.

Falun Gong, a spiritual discipline with moral teachings and slow-moving exercises, became popular in China during the 1990s, drawing about 100 million adherents by 1999, according to state estimates. The Chinese regime saw the practice’s popularity as a threat to its authority, and launched a nationwide persecution in July 1999. Millions of practitioners have been arrested and detained in labor camps, prisons, brainwashing centers, and other detention facilities, where they are often tortured.

According to Minghui.org, a U.S.-based clearinghouse dedicated to reporting on the persecution, there have been more than 4,300 confirmed deaths due to the persecution. The true number is unknown due to the difficulty of getting sensitive information out of China, but estimates put the number much higher.

Although Falun Gong is freely practiced in Hong Kong, practitioners have in recent years reported attacks from local Chinese Communist Party front organizations, such as the Youth Care Association.

Kan Hung-chueng, a local Falun Gong spokesperson, expressed strong condemnation of the attack and said there is reason to believe it was a ploy by Chinese Communist Party agents to silence critics of Beijing.

“From this incident and what’s happening in Hong Kong in the past few months, we could see that the Chinese Communist Party not only brutally suppresses Falun Gong and other kind people, it is also increasingly extending its black hands and shameless tactics to Hong Kong,” Kan said.

“The whole world bears witness to all of this—the suppression and persecution of Hong Kong people are in plain view of the world.”

He urged local police to bring the attackers to justice.

The Hong Kong bureau of The Epoch Times contributed to the report.