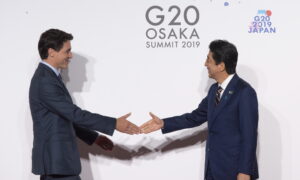 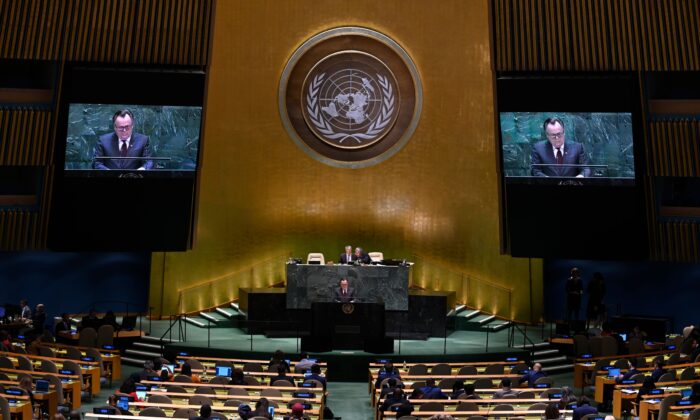 Canada's Ambassador and Permanent Representative to the United Nations Marc-Andre Blanchard speaks during the General Debate of the 74th session of the United Nations General Assembly on Sept. 30, 2019 at the United Nations Headquarters in New York City. Blanchard has since been replaced by Bob Rae who has pushed back against China’s conduct. (Johannes Eisele/AFP via Getty Images)
Canada

Global institutions like the United Nations and World Health Organization haven’t exactly met the expectations of democratic nations like Canada and the United States in a number of arenas in recent years. The COVID-19 pandemic is the most pronounced example, though others include international trade and protection of human rights.

Coming on the heels of the G20 virtual meeting hosted by Saudi Arabia, a Macdonald-Laurier Institute (MLI) webinar on Nov. 23 focused on multilateral bodies’ deference to China as a significant factor in their ineffectiveness in the eyes of the democratic west.

“Countries like Canada are evidently cowed into silence and tacit consent for China’s pervasive gross violations of the international rules-based order in international trade and diplomacy,” said China expert and MLI senior fellow Charles Burton during the webinar.

“We really have to start doing something about this, or I think we can expect the Chinese regime to to successively further its overall global geostrategic ambitions by engaging in greater and greater outrages against global norms,” he added.

But it’s not just Canada that claims it’s complicated dealing with China and that “you can’t make it too black and white,” Burton added.

The lengthy G20 Leaders’ Declaration made no mention of human rights after a meeting that Burton termed “very nonproductive,” albeit due to the inability to meet face-to-face.

Burton also suggested that democratic nations circumvent the U.N., as it is unlikely to condemn the cultural genocide in Xinjiang of Uyghur Muslims.

The WHO has been blamed for its close ties to Beijing and thus not taking the required steps to contain COVID-19.

Even before the pandemic, large multilateral organizations were facing existential questions regarding their relevance, and effectiveness with limited mandates and funding, said Olaf Wientzek, director, Multilateral Dialogue Konrad-Adenauer-Siftung in Geneva.

He says authoritarian nations see multilateral institutions differently than the democratic ones do and this leads to a lack of cohesion.

“China or Russia, they understand something quite different than we do when we talk about multilateralism. It is closely linked to certain values, to certain norms [for the democratic nations], while for others it is just the mere mechanism of cooperation,” Wientzek said at the webinar.

“China is also trying to acquire reputation credibility on the global scene by engaging in these organizations,” he added.

Part of the blame falls on the west for “punching below its weight,” by taking too much time coordinating positions or not even managing to have a unified position, according to Wietzek.

Burton explained that China does not accept the notion of conceding national sovereignty by agreeing to transnational rules. One example of this is Beijing’s continued violation of international law in the South China Sea by building islands for militarization.

Democratic nations could do better in cases like the plight of the two Michaels—Kovrig and Spavor, both Canadian citizens jailed in China for nearly two years—according to Kori Schake, director of Foreign and Defense Policy Studies at the American Enterprise Institute.

Schake said the west ought to be standing shoulder-to-shoulder with Canada demanding the release of the two men.

“It’s outrageous that the Chinese government has done this, and we should be together using every opportunity to hold them accountable for it,” she said during the webinar.

Canada’s ambassador to the U.N. Bob Rae has been very vocal about China’s transgressions while also championing the U.N.’s capabilities as an institution for upholding universal values.

“Canada has sent a very strong U.N. ambassador in Bob Rae. And he is making a difference. He is speaking out, he is mobilizing the international community. And I think that’s the force of Mr. Rae’s integrity and character and strong abilities as a diplomat. [It] does actually make Canada a bigger player in the institution,” Burton said.

Canada is also leading the movement for WTO modernization with the Ottawa Group of 12 nations. It hosted a virtual ministerial meeting on Nov. 23  where steps were taken to ensure the free flow of medical supplies and medicines.

In the meantime, the panelists say that there are ways to make China pay—to drive up the price for breaking international norms and laws. These include sanctions, boycotts, and alternative alliances.

The United States has a key role to play. The panelists want to see strong American leadership that insists nations follow U.S.-set norms for how to deal with China.

But Wientzek maintains there is no “silver bullet” for quick U.N. reform, as China has its allies that vote with it.

But he suggests stable, resilient funding for these global institutions will ensure they don’t “grovel,” then kowtow to wealthier nations like China and lose their objectivity.

Hitting officials by freezing their assets in foreign jurisdictions has been done to a wide range of internationals such as those associated with socialist Venezuelan regime leader  Nicolás Maduro.

As Beijing is hosting the 2022 Winter Olympics, a consensus to boycott the event if Kovrig and Spavor are still captive and the concentration camps in China’s northwest still run might have an effect, Burton adds.

So far, the U.N. has not taken meaningful action to address these issues.

“Then I think we have to start to look to alternative institutions that China cannot subvert by co-opting the elites of U.N. member states,” said Burton.

He said this needs to be done because the Chinese regime co-opts the elite of foreign countries to ensure the United Nations doesn’t do anything hostile towards the regime’s global interests.

The panelists agree the pandemic has provided a narrow window of opportunity for necessary reforms.

“The pandemic story makes a very important point, which is that the window of opportunity is narrow. The Chinese government will do everything they can, and I dare say the Russians and other nations as well, to prevent the U.N. from having access to critical information about their national response, because the regime operates in an autocratic and secretive way,” Burton said.