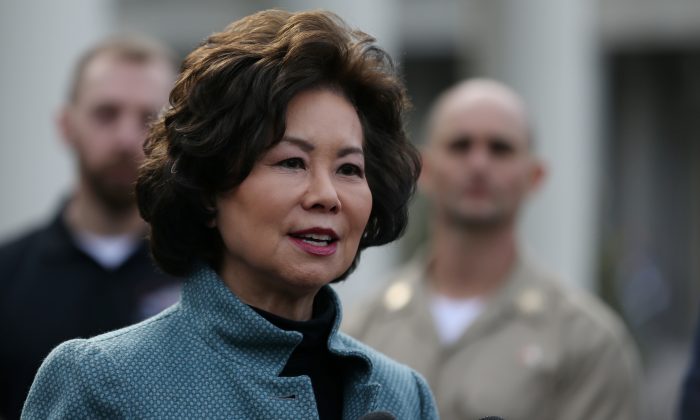 U.S. Department of Transportation Secretary Elaine Chao speaks to the news media outside of the West Wing of the White House in Washington, U.S., March 4, 2019. (Leah Millis/Reuters)
US News

WASHINGTON—Alphabet Inc.’s Wing Aviation unit on April 23 got the okay to start delivering goods by drone in Virginia later this year, making the sister unit of search engine Google the first company to get U.S. air carrier certification, the Federal Aviation Administration said.

This means Wing can begin a commercial service delivering goods from local businesses to homes, which includes flights beyond visual line of site and over people, the FAA and Wing said. Wing Aviation plans to start commercial package delivery in Blacksburg, Virginia, later this year.

Wing partnered with the Mid-Atlantic Aviation Partnership and Virginia Tech as one of the participants in the Transportation Department’s Unmanned Aircraft Systems Integration Pilot Program.

“This is an important step forward for the safe testing and integration of drones into our economy. Safety continues to be our Number One priority as this technology continues to develop and realize its full potential,” said U.S. Transportation Secretary Elaine Chao.

The certification is good for two years, the FAA said. One pilot can operate up to five drones at once and only during the day. Drones cannot carry hazardous materials or hover over people, the FAA said.

The FAA said Wing demonstrated that its operations met the agency’s safety requirements, based on extensive data and documentation, as well as thousands of safe flights conducted in Australia. Wing plans to reach out to the local community before it begins a food delivery trial in order to gather feedback, the FAA said.

Wing has recently begun commercial air delivery service in the north of Canberra, Australia, and is also about to begin its first trial in Europe, delivering to homes in Helsinki, Finland.

Wing said its data shows a lower risk to pedestrians from drone deliveries than the same trip made by car.

In May 2018, Chao announced approval for 10 projects to help assess how to regulate drones and integrate them safely into U.S. air space. The United States has lagged other countries in experimentation with drones, something the program hopes to correct.

In January, the FAA proposed rules that would allow drones to operate over populated areas and end a requirement for special permits for night use. The FAA is also considering moving ahead with additional rules in response to public safety and national security concerns as it works to integrate drones with airplane traffic.