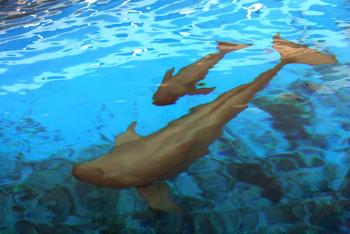 Several species who have lived in China“s Yangze river for millions of years, such as this finless porpoise, are threatened by increasing pollution to the waterway. The Yangze river dolphin for example became extinct recently. (China Photos/Getty Images)
Science

By Epoch Times Staff
Print
The mighty Yangtze River. China’s most extensive waterway was the perfect habitat for a special white dolphin, swimming these currents for 20 million years. However, the region’s recent technological boom proved too great for the curious mammal. This “Goddess of Yangtze,” as it was known in ancient China, enjoyed a magical coexistence with humankind for thousands of years. However, this long relationship ended quite abruptly as the region’s economic reform brought with it new production technologies and massive pollution that wiped out this unique animal.

Today the Yangtze River dolphin, Lipotes vexillifer, can only be seen in photographs. Of course, a few skeletons still remain, but the dolphin (known as Baiji in China) now only lives in the many poems it has inspired. Averaging 220 lbs. and over 8 ft. long, these charismatic creatures swam the 3,900 miles of China’s great river (and its infinite branches) emitting its unique squeak.

Lacking the sharp vision of their Amazon river cousins, the Yangtze dolphins had phenomenal echolocation, which permitted them to find food and effectively navigate turbulent Yangtze waters. This animal had also developed a complex social system such that every dolphin possessed a particular syllable: its own name.

The powers of the white dolphin over these Far Eastern waters were unique during remote times. But a few short years of recent human intervention were enough to make these large-mouthed dolphins disappear from Earth. The increasing pollution of the Yangtze combined with boat propeller accidents and a dwindling food supply proved too much for the white dolphin.

It’s also speculated that the noise from boat motors caused great confusion among the species, leaving some individuals isolated from the group. Fishing by using electrical discharges or using multiple hooks also served to harm these long-time residents of the Yangtze River.

According to ancient records from the Han dynasty (202 B.C. to A.D. 220), the white dolphin population of that time was abundant and lively. Centuries later, in 1979, the animal had been placed on the endangered species list. By 1990, the population had dwindled to 200. This number quickly declined over time, with the construction of the Three Gorges Dam in 1994 and the steady increase in pollution.

In 1998 there was an estimated total of only seven dolphins left. When the filling of the Three Gorges reservoir began in 2003, it seemed that the white dolphin was no more. While there were a few rare sightings at this time, the evidence was questionable.

When an expedition in search of living Yangtze dolphins began in November 2007, the results looked very grim. For seven months the Yangtze River was tracked with sophisticated equipment, including cameras and underwater microphones. But the once cheerful sounds of the talking dolphin were never heard. Nothing. The white dolphin had already left the world forever.

The tragic history of the white dolphin leaves a profound lesson to contemporary man. But is he listening? This same Yangtze River is now witness to the agony of the spatula fish, which, like the Yangtze dolphin, has lived in Chinese waters for many millions of years. Even so, environmentalists believe that there is not enough action taken to preserve these threatened species. Many are concerned that the spatula fish, along with the other species that live in the polluted waters of the Yangtze, may soon meet the same fate as the white dolphin.