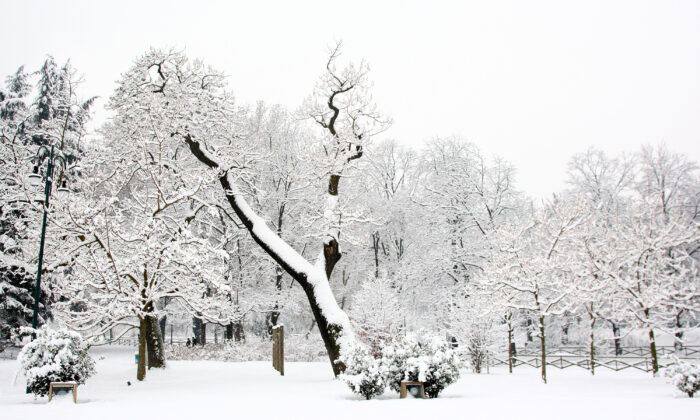 The next time you hear a loud “crack” outside on a moonless winter night, don’t assume it’s someone firing a weapon. It could just be an exploding tree.

In Collin County, Texas, locals recently heard a number of trees cracking in the icy weather.

“We listened to them all night. Sounds like gunshots going off,” Lauren Reber of Princeton said, as reported by NBC 5 Dallas-Fort Worth.

In 2005, “exploding maple trees” were the basis of an April Fool’s Day hoax from the media. But while trees don’t exactly detonate like bombs, they have long been seen as vulnerable to the frigid weather this time of year.

In “Works and Days,” a guide to farming written around 700 B.C., the ancient Greek poet Hesiod tells of the harsh conditions during “Lenaion,” a month corresponding to January and February:

“In the month of Lenaion the days are bad; they skin oxen alive. Beware of this month and its frosts that grip the earth when the gusty north wind stirs the broad sea and blows through Thrace—that nurturer of horses—as land and forest bellow. Up the mountain woodlands it blows against many high-crested oaks and sturdy firs and fells them to the rich earth as the vast forest groans.” (trans. Apostolos N. Athanassakis.)

In his “Narrative of an expedition to the Polar Sea, in the years 1820, 1821, 1822 & 1823,” the Baltic German adventurer Baron Ferdinand von Wrangel described the effects of bone-chilling cold in the Russian Far East.

“The thickest trunks of trees are rent asunder with a loud sound, which, in these deserts, falls on the ear like a signal-shot at sea,” wrote von Wrangel, as translated by Elizabeth Sabine.

In North America, meanwhile, the Sioux tribe have historically referred to January as the “The Moon of Cold-Exploding Trees.”

“When it was 40 degrees below zero at night, I lay awake and listened to trees explode. That’s a true wilderness thermometer!” Runyon wrote.

Like Runyon, Stuart Mackenzie, a master arborist and expert at Trees.com, is personally acquainted with the phenomenon.

“I have been awakened many cold winter nights hearing the trees explode,” he said.

Sugarmaker Tig Tillinghast told The Epoch Times in an email: “Being out in the woods, I can tell you from my own experience that this phenomenon is linked to cold nights and warming mornings. My birches and maples pop all over the place—especially when it gets below zero at night, and then warms in the a.m.”

A volley of gunshot-like pops isn’t the most reassuring sound on a February night. Fortunately, trees that crack in this way normally heal quickly.

“Watch for disease, pests, and pathogens that may affect the wound,” Mackenzie said.