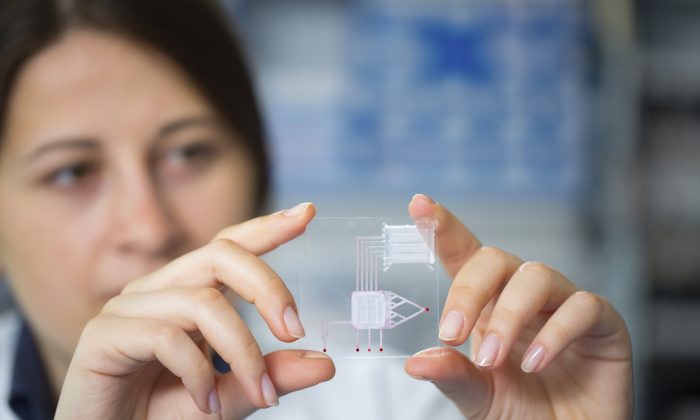 A lab on chip is device integrates several laboratory processes in one device, in woman hand
Science

Explainer: A New Nanochip That Will Detect Bacterial Infections in 15 Minutes

A new device—a biological sensor inside a nanochip—that can detect bacterial infections in 10 to 15 minutes will become available in 2016.

Devised by a team of scientists from South Africa’s Stellenbosch University, the device is currently being patented. The Technology Innovation Agency has funded a prototype in preparation for commercialization by April 2016.

Pathogenic organisms infect about 250 million people a year. At least 8 percent, around 20 million people, die. Early detection of infections can prevent many deaths.

Since the nanochip was announced as a project of the university in September 2014, progress has been made in developing additional sensing mechanisms, enhancing its capabilities.

How the Nanochip Was Born

The nanochip for early detection of infection came after a chance meeting between the author and microbiologist Leon Dicks, an expert in the field of superconductors and nanoelectrical devices.

While discussing individual current research, we agreed to work to find a way of detecting infections early and accurately.

The basis for our research was piezoelectricity, which is how crystals convert mechanical energy into electricity or vice versa.

The sensor that was developed for this purpose comprises a nanochip stacked with zinc oxide molecules on top of each other to create millions of nanowires.

Piezoelelectric energy plays a key role in the identification process. When certain materials, such as zinc oxide wires, are squeezed or pressed they generate an electric charge in response to applied mechanical stress. The slightest disturbance in the structure of the nanowires on the chip leads to piezoelectric energy. This is then converted to electrical energy and amplified to produce a voltage reading.

Microorganisms, such as bacteria, are known as flagellated microorganisms. Flagella are almost like little tails that are fixed to the organism. Vigorous movement of the flagella is used to propel the organisms at quite a high speed. These movements disturb the nanowires to generate an electronic signal due to the piezoelectric effect.

The nanochip will use a flexible substrate that would generate electricity by movement of a person’s body, thereby, for example, charging the battery of an electronic device, such as a pacemaker.

To be able to use the nanochip for infection detection, a biological flavor was added to the sensor and application by adding a lure that would attract specific bacteria. A silicon chip, measuring 1 cm², was stacked with zinc oxide molecules on top of each other to create a nanowire.

The concept was tested by attaching lysozyme molecules to the tip of each nanowire. Bacteria buster lysozyme was chosen for the test because it is in abundance in human saliva, tears, and milk.

As soon as lysozyme-specific antibodies sticks to the nanowires, the zinc oxide molecules were realigned. This movement was detected by a change in the electrical output in 15 minutes. The lysozome-specific antibodies stuck to the lysozome molecules. The movement caused by this attraction and attachment process disturbed the nanowires, resulting in an electric signal being generated.

The investigation showed that the zinc oxide nanowires are promising piezoelectric nanoforce transducers that may be developed into biomolecular detection systems.

Binding of antibodies to the biosensor surface indicates a strong piezoelectric effect on the biosensing signal. The designed nanoforce biosensor showed a linear relationship with respect to voltage output and antibody concentration.

The results showed that it is possible to detect biomolecular interactions by coupling the piezotronic and biosensing characteristics of zinc oxide nanowires.

A patient swallowing a capsule containing a nanochip for detecting infections caused by pathogens, such as E.coli, V.cholera, or Salmonella will know immediately the cause of their illness.

The production of antibodies is the natural mechanism for humans and animals to fight bacterial infections. Antibodies are specific to pathogens and by choosing the specific antibodies to attach to the piezoelectric sensor, it becomes possible to detect the specific pathogen that is tested for.

The possibilities of utilizing this concept for the detection of different infections or the presence of different types of bacteria are thus legion.

Testing for certain bacterial infections does not necessarily have to be done inside the patient’s body. A drop of blood or a patient’s sputum could be tested for diseases, such as tuberculosis, on a handheld nanochip testing station outside the body.

Furthermore, the nanochip biological sensor method could play an important role in the detection and control of postoperative infection. Surgeons could implant a nanochip during open heart or orthopedic surgery. By doing this they are mindful of infections where early detection and treatment is key.

Other mechanisms can be used to detect the presence of pathogens in a patient’s body. These mechanisms also use antibodies as bait.

Apart from the lives saved by early detection and treatment of infections, the nanochip biological sensor approach could become a less expensive diagnostic method if manufactured on a large scale. Costs would be reduced.

Willie Perold is the vice dean (research) on the faculty of engineering at Stellenbosch University in South Africa. This article was previously published on TheConversation.com