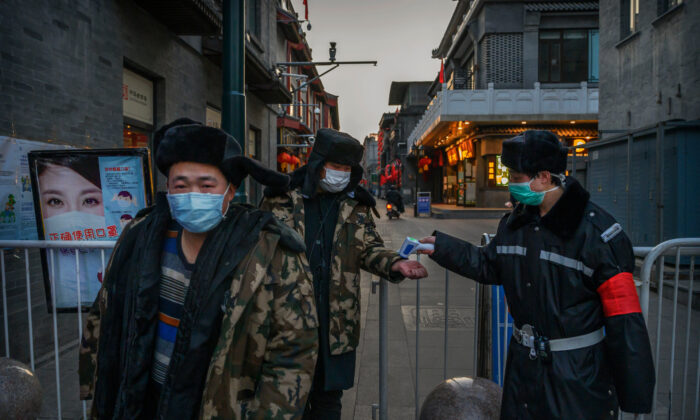 A Chinese man wears a protective mask as he and others have their temperature checked by a guard at a temporary entrance to a commercial area in Beijing on March 11, 2020. (Kevin Frayer/Getty Images)
Expert View

She wakes up every other hour as she tries to sleep. Diarrhea keeps her up all night. There’s a persistent bitter taste in her mouth.

For Wei, a millennial in the epidemic ground zero of Wuhan, the burning question of whether she has the CCP (Chinese Communist Party) virus has lingered since Jan. 18, when she went to a bar and came back home feeling sick. But three CT scans and two nucleic acid tests later—which came back negative—she remains only a “suspected” case.

Several of Wei’s friends are in the same boat. Xia, for example, has dry coughs and insomnia. Another, who had similar symptoms as Wei, later developed pulmonary calcification and was diagnosed with COVID-19. She’s now in serious condition.

“No one cares about us,” she told The Epoch Times in an interview. Wei doesn’t have the common symptoms of fever and coughing, but hasn’t recovered from her mysterious illness.

Are these people really virus-free?

“Wuhan is controlled. There’s no way you can get diagnosed. They [authorities] have made up the data and your tests will turn out negative, no matter what,” Wei said.

Meanwhile, questions persist over the fate of patients who were released after Wuhan’s makeshift hospitals were shut down. The last one closed down on March 10.

They were set up in the city’s stadiums, expo centers, and gyms to treat the growing number of patients. But this month, city authorities announced that fewer patients were being admitted, and therefore, the facilities would no longer be needed.

The Epoch Times previously interviewed Fu, a patient with mild symptoms, who stayed at a temporary hospital in the Hanyang District of Wuhan, along with 900 other patients, until the facility discharged her on Feb. 28. On March 10, she received a diagnosis report indicating film spurs in both lungs, while her artery, liver, and gallbladder were damaged.

Fu spoke with 20 other patients who were discharged despite having similar lung damage. One young man died 36 hours after his release. He was 36.

In the past few weeks, China has been reporting a declining number of infections. For 10 days in a row until March 15, Chinese authorities reported no new cases in all regions outside of Wuhan. On March 16, authorities reported 21 new cases in the whole country, with 12 of them being imported cases, or people infected with the virus who had arrived in China from a foreign country.

If all goes well, around March 20, the country might be cleared of new infections, and Wuhan businesses may be able to resume production in another two weeks, Li Lanjuan, a senior expert at China’s National Health Commission, told Chinese state media.

Since late January, authorities in Hubei Province, where Wuhan is the capital, enacted strict lockdown measures, closing down all public transportation and roads.

But this month, parts of Hubei began easing restrictions. Wuhan itself announced it would allow people to travel into Wuhan again, provided they self-quarantine for 14 days at their own expense.

International experts questioned whether China’s claims of containing the epidemic are true.

Chen Bingzhong, a former official at China’s National Health Commission, was skeptical about the Chinese figures and expressed concerns that the data from China may have been watered down.

“I think this is impossible. It’s such a serious disease, they are basically falsifying data,” he told The Epoch Times. “It’s impossible for China to have zero new cases—they suppressed it so that many cases were simply not reported,” he said.

Christian Drosten, the director of the Institute of Virology at Berlin’s Charite hospital, said the Chinese government has politicized the issue, only highlighting cases imported from foreign countries.

“We can expect no reliable data from China anytime soon,” he told German broadcaster NDR in a recent interview. The outbreak will appear to be contained in China, but “of course it won’t be that way,” he said.

Cases could also spike again as the country rushes to restart China’s economy.

“As the country revs up its economy and reintegrates into the world, there remains danger of re-introduction of the virus,” Laurie Garrett, an expert on epidemics and columnist for Foreign Policy, told The Epoch Times in an email.

Dr. Anthony Fauci, director of the U.S. National Institute of Allergy and Infectious Diseases, in a recent interview with ABC, said the U.S. authorities were paying attention to what happens in China after lockdown measures ease up and people start resuming normal life.

“Hopefully, it will stay down, but it possibly could come back up,” Fauci said.

Infections have surfaced across the country after some businesses resumed operations.

On March 2, Anhui Guofeng Plastic Industry shut down its factory in the city of Hefei after a brief reopening, after an employee who reported to work for 10 days tested positive for the virus. A total of 177 close contacts were ordered to be quarantined.

On Feb. 10, one of China’s top titanium producers suspended its production unit in Chongqing after discovering at least three employees who were infected.

“A lot of patients don’t have symptoms and remain hidden … this could bring about a second outbreak, there’s no question about it,” Chen said.