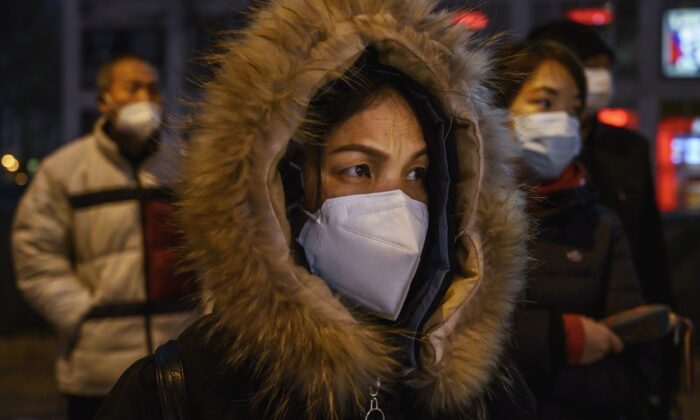 Chinese office workers wear protective masks as they line up for the bus after work in Beijing on March 2, 2020. (Kevin Frayer/Getty Images)
By Nicole Hao

In recent weeks, the Chinese regime has reported fewer novel coronavirus diagnoses across the country, making it appear as if the outbreak was leveling off.

The Epoch Times previously obtained confidential internal documents showing that in the coastal province of Shandong, authorities were purposefully under-reporting the number of diagnostic kit test results that turned up positive.

Eyewitnesses in Hubei province, where the outbreak is most severe, also told the publication that many people were unable to be diagnosed and treated at hospitals due to over-capacity, but were exhibiting symptoms and self-quarantining at home.

Now it appears some local authorities have been required to destroy data they compiled relating to the virus outbreak.

The Epoch Times obtained a copy of a Feb. 23 document sent from the Chaoyang city health commission to its provincial counterpart, the Liaoning health commission. The city is located in the country’s northeastern region, thousands of miles away from the virus epicenter in Hubei.

In compliance with the provincial health commission’s instructions, the city has inquired and checked within its government departments and agencies that previously received “documents and data” related to the outbreak, and have duly destroyed them, the document stated.

Staff who had access to the data were also required to sign a “letter of commitment,” which stipulated that officials promise to delete relevant documents from their laptops, computers, smartphones, external drive, and so on.

Furthermore, the signee will delete any screenshots and photos he or she made of the documents, and will promise not to share the contents of said documents with any party.

This publication also received screenshots of the Chaoyang city health commission’s internal database. A document with the following title is listed as “deleted”: “information about the close contacts of people with novel coronavirus, supplied by China’s Center for Disease Control and Prevention (CDC) Information Center.” In parentheses, the document title explains that the provincial government’s newly set-up command center for combating the virus had required that such information be distributed to individual cities and the provincial police bureau.

The CDC Information Center is an internal database that is used to distribute information to provincial CDC’s, hospitals, and other related users.

According to the screenshots, 13 different departments within Chaoyang government also submitted and signed the “letter” of non-disclosure, including the civil affairs bureau and county government offices.

The Epoch Times has previously reported that the Shandong province CDC compiled internal data sets, including the daily number of new positive diagnostic results. In the month of February, those numbers ranged from 1.36 times to 52 times greater than the officially published data by the Shandong health commission.

Meanwhile, Chinese media Caixin reported on Feb. 26 that authorities in the city of Wuhan (located in Hubei), where the virus first emerged, knew of the outbreak before they reported it to the public.

Caixin interviewed medical staff at the Wuhan Xinhua Hospital, who said that the facility had received seven novel coronavirus patients by Dec. 29, 2019, and kept reporting them to Jianghan district CDC officials since Dec. 27.

The Wuhan health commission announced that 27 people contracted “an unknown viral pneumonia” on Dec. 31. Central government authorities only began describing the severity of the outbreak on Jan. 20, when they admitted that the virus was contagious.

The Caixin report was removed from its website soon after publication, but netizens copied the article onto a mirror site.