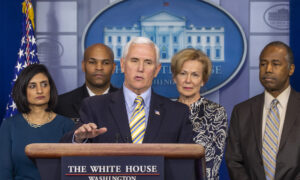 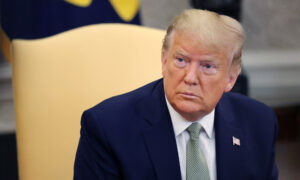 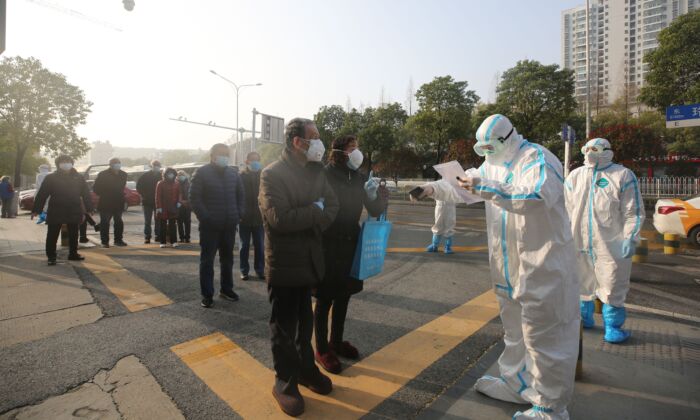 Medical workers dressed in protective suits check patients who recovered from COVID-19 as they arrive to be tested again at a hospital in Wuhan on March 14, 2020. (STR/AFP via Getty Images)
CCP Virus

A patient with symptoms of the novel coronavirus in China told The Epoch Times that soon after she was released from a makeshift hospital, her condition worsened.

However, facilities refused to provide treatment.

Since March 10, when Chinese leader Xi Jinping visited the epicenter of the outbreak in the city of Wuhan, local authorities have shut down all makeshift hospitals. They claim that fewer patients were sick; thus, the facilities were no longer needed.

Meanwhile, the Chinese regime claimed the virus has reached its “peak,” and that it successfully contained the virus’s spread.

But Ms. Fu said that she, her family, and other patients like her are still suffering.

Fu is in her 60s, and lives with her family in the Hanyang district of downtown Wuhan. She exhibited mild symptoms of the virus. But her diagnostic test came back negative, so she was placed at a quarantine center in early February.

When her condition worsened, Fu was transferred to a makeshift hospital set up at Wuhan International Expo Center in Hanyang district, on Feb. 11.

She said that over 900 patients were confined in the space. The beds were set up next to each other with no barriers—22 beds counting as one unit.

“The doctor only screened our body temperatures. When we weren’t comfortable, we could get some medicine from the nurses’ station. But they didn’t give us any treatment.”

The makeshift hospital discharged her on Feb. 28. She was sent to another quarantine center, set up at a hotel, for medical observation.

Fu had to share her room with a 30-year-old fellow patient.

After moving into the quarantine center, Fu felt worse and worse. “I am out of breath. To speak one sentence, I have to take a breath at least one time in the middle,” Fu said.

On March 10, a doctor sent Fu to the Wuhan Puren Hospital, a designated hospital for treating COVID-19.

She paid for a CT scan and blood test.

The hospital’s diagnosis report stated that Fu had thin film blurs in both lungs, which could be infected lesions. At the same time, Fu’s artery, liver, and gallbladder were damaged.

Many COVID-19 patients exhibit opacity in the lungs.

Despite Fu’s clinical symptoms matching those of COVID-19 patients, the hospital refused to treat her, saying that her diagnostic test came back negative.

The Wuhan No. 9 Hospital is a designated hospital that takes in patients from the quarantine center where Fu was staying. But that facility also refused her.

Fu said she was not the only patient being released who has not recovered.

After the city announced that all makeshift hospitals would be closed, the Wuhan expo center dispatched a bus to transport patients to quarantine centers. Patients in severe condition were transferred to hospitals. Others who were deemed healthy returned home.

Fu said that she spoke with about 20 other patients on the bus. They similarly had lung damage.

A 36-year-old man who was also at the makeshift hospital where Fu stayed died 36 hours after being discharged, according to Fu.

Fu said her husband, Mr. Fu, is also infected with the virus. After her son appealed on social media for help getting Mr. Fu hospitalized, he is being treated at the Xinzhou People’s Hospital, located in a suburb outside Wuhan.

“My husband is more sick than me. What should I do?” she said.

The Epoch Times spoke with Ms. Fu’s son in February. The son said that his father had actually died on Feb. 8, but the family didn’t want to let Ms. Fu know. Later, Ms. Fu’s 17-year-old grandson was also infected with the virus, and is being treated at the Wuhan Kangtai Hospital.

On social media, there was also evidence of other Wuhan residents facing a situation similar to Fu’s.

March 14, Yang Zhanqing, a Chinese activist based in the United States, shared a video on Twitter that displayed an audio recording of a conversation between him and a doctor surnamed Wei in Wuhan on WeChat, a popular app.

Wei said in the video, “Here, we use a political diagnosis and political treatment.” He said there were patients who didn’t recover, but the hospital released them anyway—in order to show authorities that there were large numbers of patients recovering.

As a doctor, Wei said he didn’t feel it was ethical to discharge these patients, but he has no way to stop it. “Because the specialists already signed the patients’ discharge papers, I have to release them. If I don’t release them, other doctors will.”

Yang posted that he heard from his contacts that several residential compounds in Hanyang district had mass infections in recent days, largely due to discharged patients who returned home and inadvertently spread the virus to their family members and neighbors.

On the evening of March 13, Wuhan netizen Zhang Yi live-broadcasted a video showing ambulances picking up patients from their homes. But upon stopping at a hospital, the facility refused to take them in due to full capacity.