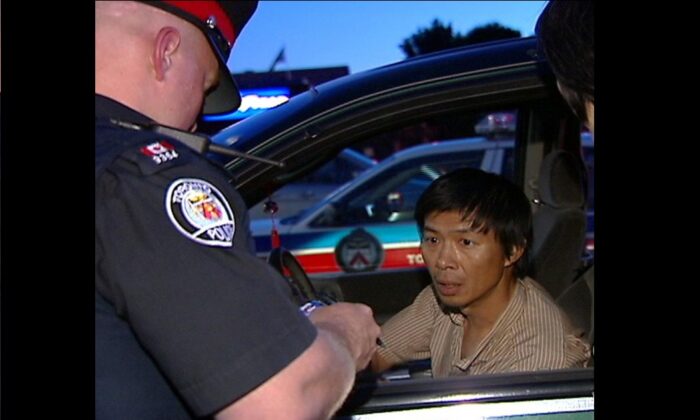 An internal Chinese regime document obtained by The Epoch Times reveals operations by agents of a notorious Chinese Communist Party organization dispatched to carry out a mission in Canada, and the money trail behind a nearly two-decade defamation campaign conducted by a Montreal publication to advance Beijing’s interests.

The document is a 2018 yearly report from the Judicial and Political Committee of the Fangshan District of Beijing, a Chinese Communist Party (CCP) organ that oversees the district’s 610 Office, a Gestapo-like secret organization charged with carrying out the CCP’s persecution campaign against Falun Dafa adherents.

It reports that representatives from the Fangshan District 610 Office came to Montreal, Toronto, and Ottawa to conduct sessions to slander “heretical religions,” a reference to Falun Dafa. The operation in Canada was conducted in accordance with the requirements of the Central Party Committee and the Municipal Party Committee, the document says.

The document adds that the mission had the intended effect.

“Local citizens have a clear understanding of Falun Gong and other heretical religious organizations, expressing that they will not believe in them, will not promote them, and will not participate in their activities.”

Intelligence bodies, researchers, and defected CCP agents have long documented and spoken publicly about Beijing’s use of the diaspora to serve its interests overseas, particularly in Canada. But this document shows the direct involvement of a Chinese secret police-type organization in Canada, as well as a direct link between the CCP organization and a Chinese publication in Canada serving the regime’s interests.

That publication is the Montreal-based Chinese-language Les Presses Chinoises, which the document says is cooperating with the Fangshan District 610 Office to publish content opposing Falun Dafa and leaflets defaming the practice.

“42 issues and 62 articles have been published, and 400,000 anti-heretical religion propaganda leaflets have been printed,” the document says. It adds that 48 issues of the publication would be published by the end of 2018, each featuring a special section that contains articles slandering Falun Dafa.

The document says that “all funds have already been paid” for 2018.

Falun Dafa, also known as Falun Gong, is a spiritual practice consisting of meditative exercises and moral teachings. Adherents of the practice, ruled to be a “protected creed” by an Ontario Human Rights Tribunal, have been subjected to a severe persecution campaign by the Chinese regime since 1999.

China expert Yiyang Xia says it’s “eye-opening” that the local 610 Office branch has gone beyond the borders of China, going so far as sending agents to Canada to carry out a mission of demonizing Falun Dafa on Canadian soil.

“The city-level 610 Office’s direct operation in the Canadian cities seems to be a new tactic in exporting the persecution of Falun Dafa overseas,” said Xia, senior director of research and policy at the Washington-based Human Rights Law Foundation.

“Previously, we only knew of Chinese embassies and consulates systematically extending the persecution to marginalize and defame Falun Dafa adherents in Western countries.”

This latest development in Canada shows that the unusual scheme where a Beijing district-level 610 Office coordinates activities abroad may be a pattern.

“The CCP’s penetration into other countries this way is not very noticeable, but these operations could potentially involve many city-level 610 Office agents interfering with the society in countries outside of China, like the United States and Canada,” he said.

“This is not only a blatant violation of sovereignty of Western countries, it also undermines people’s constitutional rights of freedom of religious beliefs and erodes freedoms in these countries.”

Winnipeg-based human rights and immigration lawyer David Matas says if the 610 Office agents who came to Canada to carry out the regime’s directive of eradicating Falun Dafa had disclosed their true intention for coming to Canada, they wouldn’t have been granted visas because “they would be coming in for the purpose of fermenting incitement to hatred.”

“My guess is that they didn’t disclose the purpose of their visit when making the visa applications, and that would be a violation of the law right here insofar as they come under false pretenses, and it’s certainly worthwhile making thorough investigations when people come in,” Matas said.

Intelligence expert David Harris says Canadian authorities should be investigating the activities of the 610 Office and its agents in Canada.

“The reports of further variations on Beijing’s attempts to penetrate Canada and influence Canadians are extremely disturbing in part because they seem to represent an expansion in the influence operations that the Chinese Communist Party undertakes on the sovereign territory of Canada,” said Harris, director of the intelligence program at Insignis Strategic Research in Ottawa.

“In a profound sense, we have the specter of Beijing’s manipulation of Canadians, their media, and even their government. This is unacceptable for any country, let alone a liberal democracy that values the constitutional rights of all of its citizens, including those who may be Falun Gong practitioners.”

Harris adds that the Canadian government should investigate this matter “in light of the evidence that has emerged,” and take “appropriate, decisive, diplomatic, and political actions against Beijing.”

Matas says this is a clear case of foreign interference in Canada.

“If the Chinese government were to spend that money openly through its Embassy, and this was a publication of the Embassy, that would be inappropriate diplomatic activity,” he said. “It would be foreign interference in Canadian affairs, and the people who were responsible for such a publication would be expelled from Canada as persona non grata.”

But Canada lacks the required legislation to confront the issue of foreign interference more effectively, he said.

“I think when any foreign agency is pumping money into Canada for advocacy purposes, there should be a requirement of registration for that advocacy. It shouldn’t be undercover the way it is now,” Matas said.

In some jurisdictions such as Australia, there are laws in place that require entities acting on behalf of foreign governments to publicly register their names.

“I think Les Presses Chinoises and its financing is a classic example of the fact that we’re undefended against this sort of manipulation,” Matas said.

The 610 Office, named after the day it was formed on June 10, 1999, was tasked to coordinate efforts to eradicate Falun Dafa, which had grown too popular in China for the liking of the totalitarian CCP. Government statistics showed that between 70 to 100 million people in China took up the meditation discipline in the 1990s after its introduction to the public in 1992.

The CCP organ was formed under the direct command of Jiang Zemin, the Party leader who started the persecution campaign against Falun Dafa in 1999 with the aim of eradicating it completely.

The 610 Office was provided with extralegal powers, transcending administration power at different jurisdiction levels to coordinate all aspects of the campaign to eliminate Falun Dafa through persecuting its adherents. This included arrest, torture, killings, and propagation of slanderous information about the practice to turn public opinion against it.

Hao Fengjun, a former officer with the 610 Office who defected to Australia in 2005, said in past interviews that there are 610 Office branches at each level of the CCP, from the Central Committee all the way down to the provincial, city, and local district-level Party branches.

Although there have been reports of some organizational change to the 610 Office, China expert Xia says there has been no fundamental change. He says the only significant change is that since March 2018, the CCP organization overseeing the 610 Office has been changed to the CCP Central Political and Legal Affairs Committee.

But for all practical purposes, nothing has changed for the players, and the 610 Office continues its mission of eradicating Falun Dafa, probably under a different name, Xia says.

The internal document shows the financial links between the 610 Office and Les Presses Chinoises, which has been publishing content against Falun Dafa for years.

The online archives of Les Presses Chinoises show that most of the weekly papers published for consecutive years have a section titled “The Truth of Justice,” which parrots the CCP’s defamation and condemnation of Falun Dafa and its adherents that is spread by the regime in China. The content usually spans two pages, which contain no ads or any typical news articles.

Les Presses Chinoises is owned by Crescent Chau. The Epoch Times contacted Chau for comment but received no response.

The paper published its first special edition on the subject in November 2001, which included a petition asking the Chinese community to “unite” in “denouncing Falun Gong.”

The special edition was an indictment of Falun Dafa, and the content a word-for-word repetition of the CCP’s hate propaganda against the practice disseminated in China.

University of Montreal history professor David Ownby, who has studied Falun Dafa, has called the articles “unsubstantiated filth poured upon the page” and said there is no truth to the content.

A group of Falun Dafa adherents took Chau to court, and in December 2001, three weeks after the first special edition, the court issued an injunction ordering Crescent Chau to stop publishing his anti-Falun Gong content.

In February 2002, Chau defied a court injunction and published a second anti-Falun Gong special edition cover-to-cover, saying Falun Dafa adherents were “evil” and an “enemy of the state,” among other slanderous statements.

Chau somehow drummed up funds to print 100,000 copies of another 32-page cover-to-cover anti-Falun Dafa special edition nationwide in both August 2006 and July 2007, parroting CCP defamation material against Falun Dafa spread in mainland China. Copies were circulated in Montreal, Toronto, and Ottawa, and as far west as Vancouver. Again, the special edition contained no advertising and was distributed for free. Regular issues of the paper, which had a circulation of 3,500 to 4,000 in Montreal, sold for 60 cents.

Chau is a regular at the World Chinese Media Forum hosted every two years in China by the government and the United Front Work Department, the CCP organization responsible for gathering intelligence and influencing politics in foreign countries. Chinese state-owned media quoted Chau as saying that Beijing “should strengthen its connection to the overseas Chinese community.”

The Epoch Times Chinese edition wrote a series of investigative reports in 2007 on Chau and suggested that he might be an agent of the Chinese regime.

The reports included interviews with Chen Yonglin, a former Chinese diplomat working for a unit specializing in the eradication of Falun Dafa, who defected to Australia.

Chen said it’s clear that Les Presses Chinoises “has become the henchman and propaganda tool for the Chinese Communist Party.” He also said that “it’s very likely that the printing costs” were covered by the regime.

“The contents seem to be mostly produced and provided by the CCP,” he said.

Chau sued The Epoch Times for libel, but the case was dismissed by Superior Court Justice Catherine Mandeville in April 2010. “This is a case of the biter complaining about being bitten,” Mandeville said, and that “the reputations of Mr. Chau and of La Presse Chinoise are … unequivocally anti-Falun Gong and pro-PRC [People’s Republic of China].” La Presse Chinoise is the name of the company printing the Les Presses Chinoises publication.

Being called a Beijing agent was therefore not an “unfair attack” but rather “a legitimate opinion,” she said.

“Mr. Chau … believes that it is part of his responsibility to defend the position of the PRC government. The [Epoch Times] articles raised that his opinions on Falun Gong but also on Tibet and many other subjects are identical to that which the PRC’s government advocates,” Mandeville said.

Mandeville also said Chau’s explanations for how he funded his special editions denouncing Falun Dafa were “to say the least, nebulous.”

During court proceedings, Chau admitted that he hadn’t interviewed Falun Dafa practitioners for the content he published and hadn’t read Falun Dafa’s teachings. He said he aspires to eradicate Falun Dafa.

Chau subsequently appealed the lower court’s decision without success. The three appeal court judges reaffirmed in 2012 that referring to Chau and his newspaper company “as agents promoting the ideas of a government cannot be considered defamatory.”

Chau tried to take the case to the supreme court, but failed.