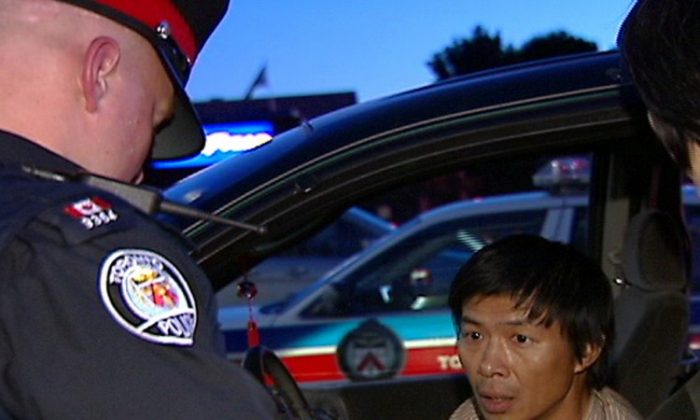 Toronto police question Lu Ping over his delivery of an anti-Falun Gong tabloid in June 2007 at the Asian Farm store in Toronto. The tabloid was the fourth installment of a 'special edition' magazine published by Les Presses Chinoises, a Montreal Chinese-language newspaper owned by Crescent Chau. A judge ruled in 2010 that it was fair to suggest Chau was acting as an agent of Beijing in his unsubstantiated defaming of Falun Gong in the high-circulation 'special editions' of his newspaper. The Quebec Court of Appeal in February 2012 dismissed Chau's appeal of that 2010 ruling. (NTDTV)
US

Three Canadian judges have dismissed an appeal of a defamation lawsuit against The Epoch Times with costs after Les Presses Chinoises owner Crescent Chau tried to sue The Epoch Times for articles alleging he was acting as an agent of the Chinese communist regime.

The Quebec Court of Appeal, in a unanimous judgment, dismissed Chau’s appeal of an earlier judgement against his lawsuit, vindicating the Montreal editions of The Epoch Times.

The judgment upholds the reasons Justice Catherine Mandeville gave at the Quebec Superior Court on April 29, 2010, when she originally dismissed Chau’s case.

Chau sued The Epoch Times for defamation after the newspaper published articles connecting Chau’s efforts to demonize Falun Gong with the Chinese communist regime’s repression of the group.

The Court of Appeal agreed with Justice Mandeville that there was no reason to believe an ordinary citizen would deem that Crescent Chau or his paper had been improperly defamed.

“The trial judge concluded that the articles specified are not an unfair attack to the reputation of the appellants [Chau and co.]. It is worth repeating that in those articles, the respondent [The Epoch Times] claims that the appellants are agents of People’s Republic of China, and that they are funded by the latter to spread its ideology on Falun Gong,” reads the judgement.

“The fact that the respondent refers to the appellants as agents promoting the ideas of a government cannot be considered defamatory in those circumstances. All the more, Chau has declared several times that he shares the ideas of China about the movement in question.

“In view of the overall context of this public debate, this Court concludes that the litigious statements express legitimate concerns and constitute an opinion which is drawn from a factual premise and not made for the purpose of abusively attacking the reputation of Mr. Chau.”

In August 2006, Chau printed 100,000 copies of a special 32-page tabloid—without a single advertisement—and distributed it nationwide, for free.

The newspaper had no ads or typical news, only articles condemning Falun Gong, which is persecuted by the communist regime in Mainland China.

Les Presses Chinoises normally had a circulation of only 6,000 and was only distributed in Montreal with about 100 copies circulated in Ottawa.

Chen Yonglin, a former diplomat at the Chinese consulate in Sydney, Australia, who defected to Australia, said in a visit to Canada in 2007 that Chinese spies and front organizations were widespread here.

“It is clear that the Les Presses Chinoises is cooperating with the Chinese embassy and consulate and has become the hatchet-man and propaganda tool for the Chinese Communist Party here,” Chen said.

“It is very likely that the printing costs were directly funded by the Chinese embassy and consulate—the contents seem to be mostly produced and provided by the CCP.”

Chau denied taking orders from the Chinese authorities. He portrays his opposition to Falun Gong as a personal “crusade.”

While Chau said he aspired to eliminate Falun Gong in Canada, he admitted he had not interviewed Falun Gong practitioners for the stories he published, and had not read Falun Gong’s teachings.

Reliable sources told The Epoch Times that CSIS had investigated He and believed her to be a Chinese agent.

Several other Chinese papers reportedly turned her down before her articles appeared in Chau’s Les Presses Chinoises.

In her articles, which appeared first as paid ads, He Bing accused Falun Gong adherents of everything from sucking blood and bestiality to murder and suicide. She called Falun Gong practitioners “insane,” “stupid,” and “scatter-brained.”

University of Montreal professor David Ownby, an expert in popular Chinese religions who has studied Falun Gong, called the statements “unsubstantiated filth poured upon the page” and said he’d seen nothing to suggest any truth behind He’s accusations.

But Chau continued to publish such content even after two Quebec court orders told him to stop, and even called practitioners “enemies of the state” in some of the content.

He Bing returned to China and was paraded in Chinese state media as a hero in the war on Falun Gong.

Chau, too, became a celebrity of sorts in the Mainland Chinese press. He attended conferences in China that promoted “information exchange and business cooperation” between overseas and mainland Chinese media. State media quoted Chau as saying the Chinese regime “should strengthen its connection to the overseas Chinese community.”

His efforts did not go unnoticed. Within four days of the “special edition” hitting the streets, the website for the Mainland China-based People’s Daily, the official newspaper of the Chinese Communist Party, published a report praising Chau.

In the summer of 2007 Chau published a fourth installment of his Truth Magazine in Toronto with a front page headline: “Will your Maple Card (Canadian residency card) expire?” Inside, the remaining 15 pages of the paper were devoted to attacking Falun Gong.