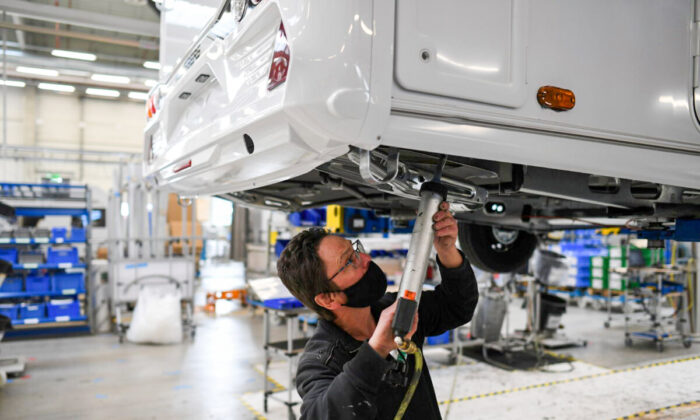 A worker assembles a vehicle at the Knaus-Tabbert AG factory in Jandelsbrunn near Passau, Germany, on March 16, 2021. (Andreas Gebert/Reuters)
Economy

LONDON—Eurozone manufacturing production fell last month for the first time since the initial wave of the coronavirus pandemic two years ago as higher prices and a darkening economic outlook kept consumers wary of making purchases, a survey showed.

S&P Global’s final manufacturing Purchasing Managers’ Index (PMI) fell to 52.1 in June from May’s 54.6, its lowest since August 2020 but just ahead of a preliminary reading of 52.0.

An index measuring output, which feeds into a composite PMI due on Tuesday and seen as a good gauge of economic health, sank below the 50 mark separating growth from contraction to a two-year low of 49.3. In May it was 51.3.

“Euro zone manufacturing has moved into decline in June, with production dropping for the first time for two years amid a steepening downturn in demand,” said Chris Williamson, chief business economist at S&P Global.

“Demand is now weakening as firms report customers to be growing more cautious in relation to spending due to rising prices and the uncertain economic outlook.”

The new orders index fell further below the breakeven mark to 45.2 from 48.7, its lowest since May 2020. Consumers have held back on making purchases, deterred by soaring prices and recession fears.

The ECB has lagged most of its global peers in winding back pandemic-era ultra-loose monetary policy but is expected to raise its deposit rate above zero for the first time in a decade in September, a Reuters poll found. It is likely to start raising rates this month.

Forward looking indicators in S&P Global’s survey painted a somewhat gloomy picture, with inventories of raw materials and unsold stock rising due to lower than expected production and sales volumes while backlogs of work fell.