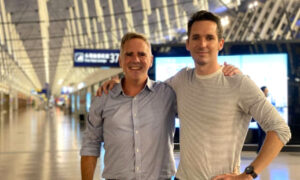 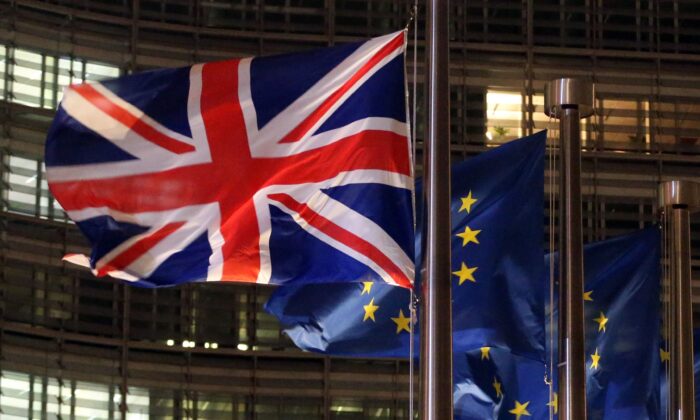 A Union Jack and EU flags fluttering outside the Berlaymont building, the European commission headquarters, on Dec. 9, 2020. (Francois Walschaerts/AFP via Getty Images)
Europe

The European Union and the UK on Friday voiced their concerns over media freedom in China after two journalists working for British and Irish broadcasters were forced to leave the country late last month.

The EU is concerned as BBC and RTE correspondents left #China. This departure comes after a long period of harassment and latest case of foreign correspondents being driven out of the country. Read the full statement. https://t.co/37eyUYDjfV

“This departure comes after a long period of harassment of Mr. Sudworth and his BBC colleagues by the authorities, comprising surveillance, threats of legal action, obstruction, intimidation, and the posting online by official media of videos that personally named him and made use of police video footage,” said Nabila Massrali, EU spokesperson for foreign affairs and security policy.

“This is the latest case of foreign correspondents being driven out of China as a result of continuous harassment and obstruction to their work, coming on top of the expulsion of at least 18 correspondents last year,” she said in a statement.

She said the EU had “repeatedly expressed its concerns” to Beijing over “the undue working restrictions imposed on foreign journalists and reported related harassment.”

“The EU calls upon China to abide by its obligations under national and international law and ensure the freedom of speech and press,” said the statement.

Responding to a request for reaction from The Epoch Times, a spokesperson for the UK’s Foreign, Commonwealth and Development Office (FCDO) said: “We remain deeply concerned about the lack of media freedoms and the deteriorating situation for journalists in China and we raise this regularly with Beijing.”

According to the Foreign Correspondents’ Club of China (FCCC), “Sudworth left after months of personal attacks and disinformation targeting him and his BBC colleagues, disseminated by both Chinese state media and Chinese government officials.”

The FCCC said the Chinese authorities had issued Sudworth only short visas lasting one, three, and six months for the past two years, apparently “in retaliation for his coverage of Xinjiang, the COVID-19 pandemic and other issues that Chinese foreign ministry officials repeatedly said had crossed ‘red lines.’”

The threats intensified after the UK’s broadcasting regulator Ofcom on Feb. 4 revoked the license of CGTN, an international English-language satellite news channel directly controlled by the Chinese Communist Party (CCP).

The Chinese regime announced on Feb. 11 that it was pulling BBC World News off the air in China.

On March 18, the Global Times, a Chinese propaganda outlet, quoted a Xinjiang official as saying “a number of individuals” in the region were planning “to sue BBC for producing fake news, spreading rumors about Xinjiang, and slandering China’s policy in its Xinjiang region.”

“Alarmingly, Chinese authorities have also shown a greater willingness to threaten journalists with legal measures, proceedings that could subject them to exit bans, barring them from leaving China,” the FCCC stated.

In September 2020, the Australian government evacuated two journalists from China after the authorities tried to prevent them from leaving.